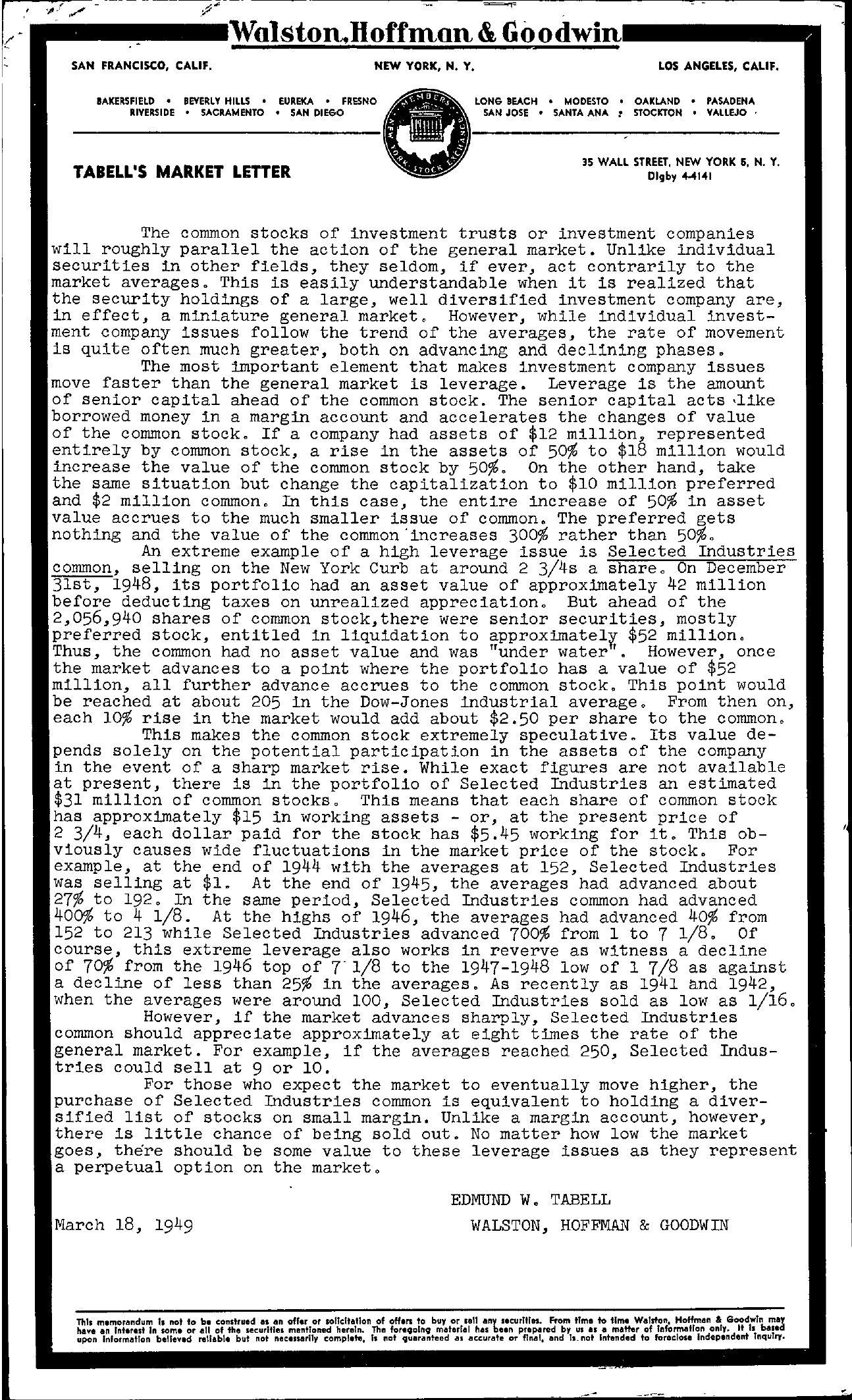 TABEll'S MARKET lEnER 35 WALL STREET, NEW YORK 6, N, y, Digby 4-4141 The common stocks of investment trusts or investment companies roughly parallel the action of the general market. Unlike individual securities in other fields, they seldom, if ever, act contrarily to the market averages. This is easily understandable when it is realized that the security holdings of a large, well diverSified investment company are, in effect, a miniature general market. However, while individual investment company issues follow the trend of the averages, the rate of movement is quite often much greater, both on advancing and declining phases. The most important element that makes investment company issues move faster than the general market is leverage. Leverage is the amount of senior capital ahead of the common stock. The senior capital acts ,like borrowed money in a margin account and accelerates the changes of value of the common stock. If a company had assets of 12 million, represented entirely by common stock, a rise in the assets of 50 to 18 million would increase the value of the common stock by 50. On the other hand, take the same situation but change the capitalization to 10 million preferred and 2 million common. In this case, the entire increase of 50 in asset value accrues to the much smaller issue of common. The preferred gets nothing and the value of the common 'increases 300 rather than 50. An extreme example of a high leverage issue is Selected Industries selling on the New York Curb at around 2 3/4s a share. On December , 948, its portfolio had an asset value of approximately 42 million before deducting taxes on unrealized appreciation. But ahead of the 2,056,940 shares of common stock, there were senior securities, mostly preferred stock, entitled in liquidation to approximatelr, 52 million. Thus, the common had no asset value and was under water f. However, once the market advances to a point where the portfoliO has a value of 52 million, all further advance accrues to the common stock. This point would be reached at about 205 in the Dow-Jones industrial average. From then on, each 10 rise in the market would add about 2.50 per share to the common. This makes the common stock extremely speculative. Its value depends solely on the potential partiCipation in the assets of the company in the event of a sharp market rise. While exact figures are not available at present, there is in the portfoliO of Selected Industries an estimated 31 million of common stocks. This means that each share of common stock has approximately 15 in working assets – or, at the present price of 2 3/4, each dollar paid for the stock has 5.45 working for it. This obviously causes wide fluctuations in the market price of the stock. For example, at the end of 1944 with the averages at 152, Selected Industries was selling at 1. At the end of 1945, the averages had advanced about 27 to 192. In the same period, Selected Industries common had advanced 400 to 4 1/8. At the highs of 1946, the averages had advanced 40 from 152 to 213 while Selected Industries advanced 700 from 1 to 7 1/8. Of course, this extreme leverage also works in reverve as witness a decline of 70 from the 1946 top of 7'1/8 to the 1947-1948 low of 1 7/8 as against a decline of less than 25 in the averages. As recently as 1941 and 1942, when the averages were around 100, Selected Industries sold as low as 1/16. However, if the market advances sharply, Selected Industries common should appreciate approximately at eight times the rate of the general market. For example, if the averages reached 250, Selected Industries could sell at 9 or 10. For those who expect the market to eventually move higher, the purchase of Selected Industries common is equivalent to holding a diverSified list of stocks on small margin. Unlike a margin account, however, there is little chance of being sold out. No matter how low the market goes, there should be some value to these leverage issues as they represent a perpetual option on the market. EDMUND W. TABELL WALSTON, HOFFMAN & GOODWIN aThis memorandum t. not to b. construed u an offer or sol1cttatlon of offers to buy or .all any .ecurttlet. From tIme to time Walrton, HoHman GoodwIn may have an Int.rest In some or all of the securltl.s mentioned hereIn. The foreQoln; materiel has been prepared by us liS II matter of Il'lformatlon only. It II baled upon Information believed reliable but not nece.sarlly complete, b not qU/lranteed as accurate or final. and Is. not Intended to foreelose Independent Tnqu1rr.