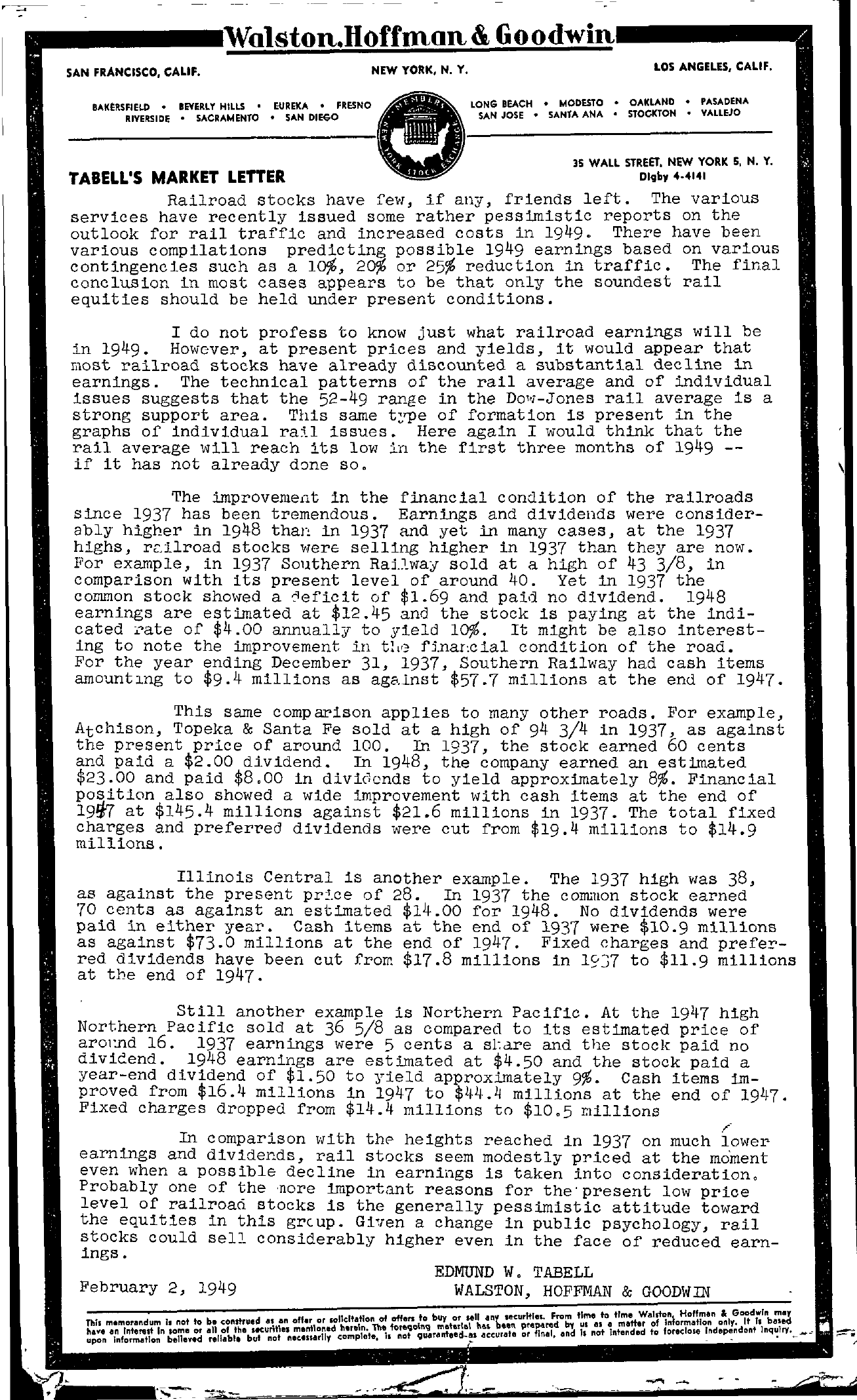 TABELL'S MARKET LEnER Olgby 44141 Railroad stocks have few, if any, friends left. The various services have recently issued some rather pessimistic reports on the outlook for rail traffic and increased costs in 1949. There have been various compilations predicting possible 1949 earnings based on various contingencies such as a 10, 20 or 25 reduction in traffic. The final conclusion in most cases appears to be that only the soundest rail equities should be held under present conditions. I do not profess to know just what railroad earnings will be in 1949. However, at present prices and yields, it would appear that most railroad stocks have already discounted a substantial decline in earnings. The technical patterns of the rail average and of individual issues suggests that the 52-49 range in the DOl'/-Jones rail average is a strong support area. This same trpe of formation is present in the graphs of individual rail issues. Here again I would think that the rail average will reach its 10Vi in the first three months of 194-9 — if it has not already done so. The improvement in the financial condition of the railroads Since 1937 has been tremendous. Earnings and diVidends were considerably higher in 1948 thar, in 1937 and yet in many cases, at the 1937 highs, r2.ilroad stocks were selling higher in 1937 than they are now. For example, in 1937 Southern Ral1..way sold at a high of 43 3/8, in comparison with its present level of around 4-0. Yet in 1937 the common stock showed a Cleficit of 1.69 and paid no dividend. 194-8 earnings are estimated at 12.4-5 and the stock is paying at the indicated ate of 4.00 annually to yield 10. It might be also interest- ing to note the improvement in tIl' flnarcial condition of the road. For the year ending December 31, 1937, Southern Railway had cash items amount mg to 9.4- millions as aga.lnst 57.7 millions at the end of 1947. This same comparison applies to many other roads. For example, Atchison, Topeka & Santa Fe sold at a high of 94 3/4 in 1937, as against the present price of around 100. In 1937, the stock earned 60 cents and paid a 2.00 dividend. In 1948, the company earned an estimated 23.00 and paid 8.00 in divi00nds to yield approximately 8. Financial position also showed a wide improvement with cash items at the end of 197 at 145.4 millions against 21.6 millions in 1937. The total fixed charges and preferred dividends were cut from 19.4 millions to 14.9 miLlions. Illinois Central is another example. The 1937 high Vias 38, as against the present pr,ce of 28. In 1937 the common stock earned 70 cents as against an estimated 14.00 for 1948. No dividends were paid in either year. Cash items at the end of 1937 were 10.9 millions as against 73.0 millions at the end of 1947. Fixed charges and preferred dividends have been cut from 17.8 millions in 1J7 to 11.9 millions at the end of 1947. Still another example is Northern PacifiC. At the 194-7 high Northern Pacific sold at 36 5/8 as compared to its estimated price of arolnd 16. 1937 earnings were 5 cents a sta.re and the stock paid no divicend. 1948 earnings are estimated at 4.50 and the stock paid a year-end dividend of 1.50 to yield approximately 9. Cash items improved from 16.4 millions in 1947 to 44. millions at the end of 1947. Fixed charges dropped from 14.4 millions to 10.5 millions .,r' In comparison with thp heights reached in 1937 on much lower earnings and dividends, rail stocks seem modestly priced at the moment even when a Possible decline in earnii1gs is taken into consideration. Probably one of the nore important reasons for the' present low price level of railroad stocks is the generally peSSimistic attitude toward the equities in this grcup. Given a change in public psychology, rail stocks could sell considerably higher even in the face of reduced earnings. February 2, 1949 EDMUND W. TABELL WALSTON, HOFFMAN & GOODWIN This m.mcrandum 11 not to b. construed lIS an onu or I have an Interest In some or aU of the HCuritlel upon Information bel1eftd rellabl. but not I I&curltles. From lime to time Wabton Hoffman Ie Goodwin mlly prepllred by UI as a matter of Intormation only. It b based or fInal, and II not intended to foreclose Independent Inqlry. ….. \