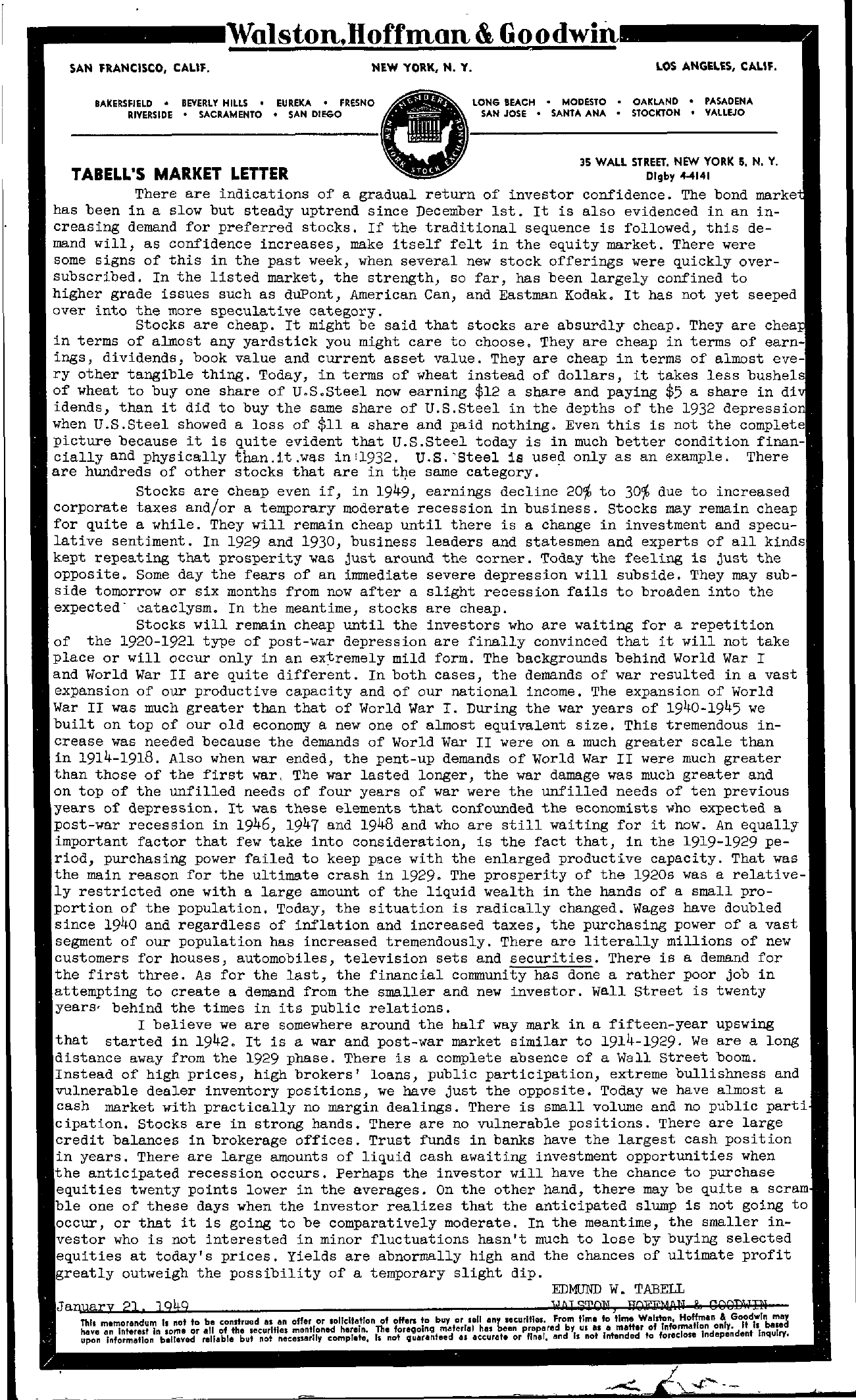 TABELL'S MARKET LETTER l5 WALL STREET. NEW YORK S, N, Y. DIgby 4-4141 There are indications of a gradual return of investor confidence. The bond ma,r',et has been in a slow but steady uptrend since December 1st. It is also evidenced in an increasing demand for preferred stocks. If the traditional sequence is followed, this demand will, as confidence increases, make itself felt in the equity market. There were some signs of this in the past week, when several new stock offerings were quickly oversubscribed. In the listed market, the strength, so far, has been largely confined to higher grade issues such as duPont, American Can, and Eastman Kodak. It has not yet seeped over into the more speculative category. Stocks are cheap. It might be said that stocks are absurdly cheap. They are in terms of almost any yardstick you might care to choose. They are cheap in terms of ings, dividends, book value and current asset value. They are cheap in terms of almost e ry other tangible thing. Today, in terms of wheat instead of dollars, it takes less of wheat to buy one share of U.S.Steel now earning 12 a share and paying 5 a share in idends, than it did to buy the same share of U.S.Steel in the depths of the 1932 depress when U.S.Steel showed a loss of 11 a share and paid nothing. Even this is not the CUli,vc picture because it is quite evident that U.S.Steel today is in much better condition f ciallyand physically than.it.w'ls in!1932. U.S. 'Steel is used only as an example. There are hundreds of other stocks that are in te same category. – Stocks are cheap even if, in 1949, earnings decline 20 to 30 due to increased corporate taxes and/or a temporary moderate recession in business. Stocks may remain cheap for quite a while. They will remain cheap until there is a change in investment and specu- lative sentiment. In 1929 and 1930, bUSiness leaders and statesmen and experts of all kept repeating that prosperity was just around the corner. Today the feeling is just the opposite. Some day the fears of an immediate severe depression will subSide. They may subside tomorrow or six months from now after a slight recession fails to broaden into the expected- Gataclysm. In the meantime, stocks are cheap. Stocks will remain cheap until the investors who are waiting for a repetition of the 1920-1921 type of post-war depression are finally convinced that it will not take place or will occur only in an extremely mild form. The backgrounds behind World War I and World War II are quite different. In both cases, the demands of war resulted in a vast expansion of our productive capacity and of our national income. The expansion of World War II was much greater than that of World War I. During the war years of 1940-1945 we built on top of our old economy a new one of almost equivalent size. This tremendous in- crease was needed because the demands of World War II were on a much greater scale than in 1914-1918. Also when war ended, the pent-up demands of World War II were much greater than those of the first war. The war lasted longer, the war damage was much greater and on top of the unfilled needs of four years of war were the unfilled needs of ten previous years of depression. It was these elements that confounded the economists who expected a post-war recession in 1946, 1947 and 1948 and who are still waiting for it now. An equally important factor that few take into conSideration, is the fact that, in the 1919-1929 period, purchasing power failed to keep pace with the enlarged productive capacity. That was the main reason for the ultimate crash in 1929. The prosperity of the 1920s was a relatively restricted one with a large amount of the liquid wealth in the hands of a small pro- portion of the population. Today, the situation is radically changed. Wages have doubled since 1940 and regardless of inflation and increased taxes, the purchasing power of a vast segment of our population has increased tremendously. There are literally millions of new for houses, automobiles, television sets and securities. There is a demand for first three. As for the last, the financial community has done a rather poor job in to create a demand from the smaller and new investor. Wall Street is twenty years- behind the times in its public relations. I believe we are somewhere around the half way mark in a fifteen-year upswing started in 1942. It is a war and post-war market similar to 1914-1929. We are a long distance away from the 1929 phase. There is a complete absence of a Wall Street boom. Instead of high prices, high brokers' loans, public partiCipation, extreme bullishness and vulnerable dealer inventory pOSitions, we have just the opposite. Today we have almost a cash market with practically no margin dealings. There is small volume and no public cipation. Stocks are in stror hands. There are no vulnerable positions. There are large credit balances in brokerage offices. Trust funds in banks have the largest cash position years. There are large amounts of liquid cash awaiting investment opportunities when anticipated recession occurs. Perhaps the investor will have the chance to purchase ties twenty points lower in the averages. On the other hand, there may be quite a one of these days when the investor realizes that the anticipated slump is not going to cur, or that it is going to be comparatively moderate. In the meantime, the smaller investor who is not interested in minor fluctuations hasn't much to lose by buying selected ies at today's prices. Yields are abnormally high and the chances of ultimate profit outweigh the possibility of a temporary slight dip. EDMUND W. TABELL