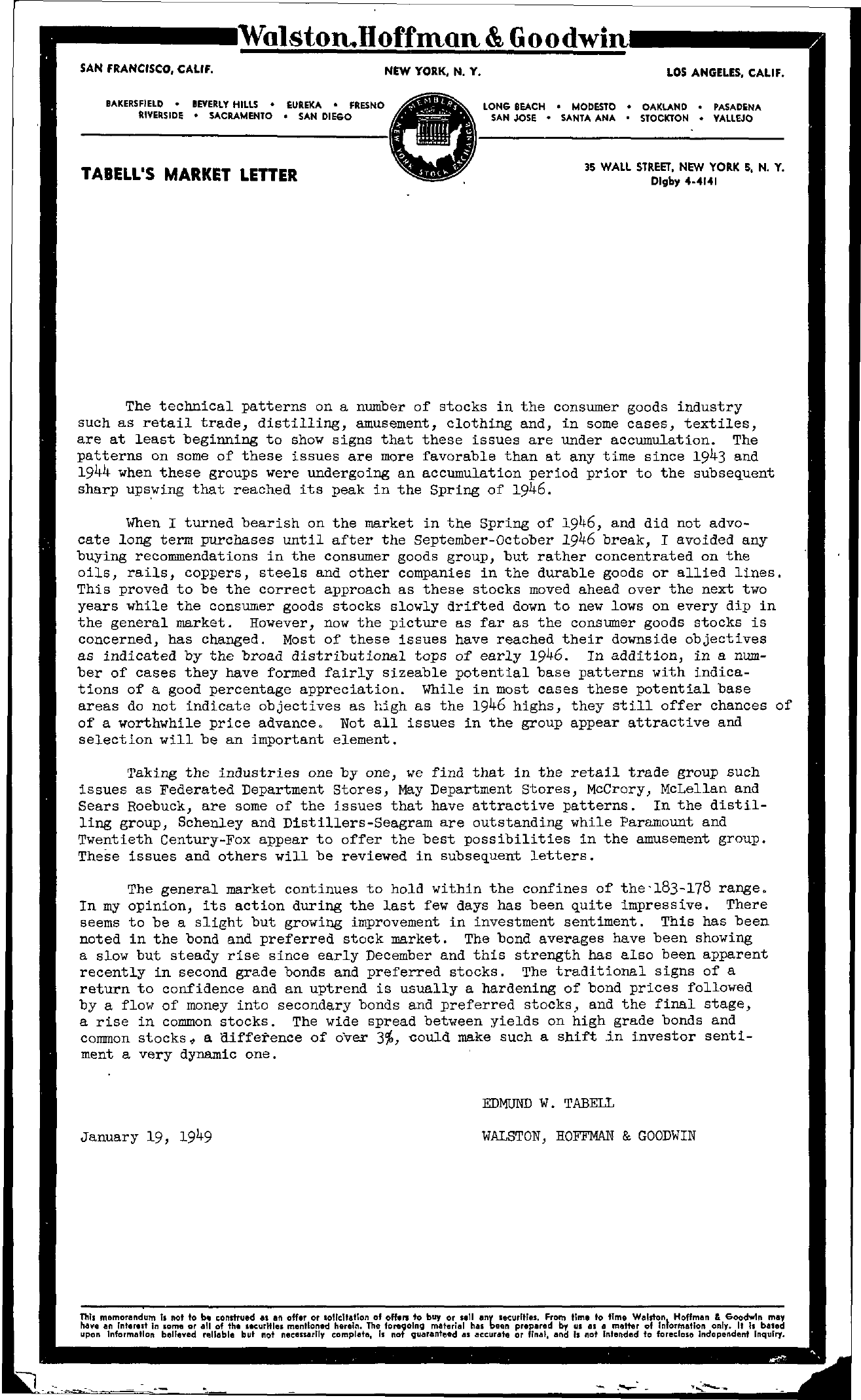 TABELL'S MARKET LETTER 35 WALL STREET, NEW YORK 5, N. Y. DIgby 44141 The technical patterns on a number of stocks in the consumer goods industry such as retail trade, distilling, amusement, clothing and, in some cases, textiles, are at least beginning to show signs that these issues are under accumulation. The patterns on some of these issues are more favorable than at any time since 1943 and 1944 when these groups were undergoing an accumulation period prior to the subsequent sharp ups,wing that reached its peak in the Spring of 1946. When I turned bearish on the market in the Spring of 1946, and did not advocate long term purchases until after the September-October 1946 break, I avoided any buying recommendations in the consumer goods group, but rather concentrated on the oils, rails, coppers, steels and other companies in the durable goods or allied lines. This proved to be the correct approach as these stocks moved ahead over the next two years while the consurrr goods stocks slowly drifted down to new lows on every dip in the general market. However, now the picture as far as the consumer goods stocks is concerned, has changed. Most of these issues have reached their downside objectives as indicated by the broad distributional tops of early 1946. In addition, in a number of cases they have formed fairly sizeable potential base patterns with indications of a good percentage appreciation. While in most cases these potential base areas do not indicate objectives as ligh as the 1946 highs, they still offer chances of of a worthwhile price advanceo Not all issues in the group appear attractive and selection will be an important element. Taking the industries one by one, we find that in the retail trade group such issues as Federated Department Stores, May Department Stores, McCrory, McLellan and Sears Roebuck, are some of the issues that have attractive patterns. In the distilling group, Schenley and Distillers-Seagram are outstanding while Paramount and Twentieth Century-Fox appear to offer the best possibilities in the amusement group. These issues and others will be reviewed in subsequent letters. The general market continues to hold within the confines of the'183-l78 range. In my opinion, its action during the last few days has been quite impressive. There seems to be a slight but growing improvement in investment sentiment. This has been noted in the bond and preferred stock market. The bond averages have been showing a slow but steady rise since early December and this strength has also been apparent recently in second grade bonds and preferred stocks. The traditional signs of a return to confidence and an uptrend is usually a hardening of bond prices followed by a flow of money into secondary bonds and preferred stocks, and the final stage, a rise in common stocks. The wide spread between yields on high grade bonds and common stocks. a aifference of over 3, could make such a shift in investor sentiment a very dynamic one. January 19, 1949 EDMUND W. TABELL WALSTON, HOFFMAN &GOODWIN Thls momwandum 11 not to b, construed at an offe, or &elicitation of off.rs to buy or .,11 any lecurltles. From time to time Waldon Hoffman & Goodw1n may have lin Inter.st In lome or all of the .curle. mentioned herein. The foregoIng mllterial has been prepared by UI III II metter of Intorrnatlon only. It II based upon Information befleyed rellable but not necenartfy complete. Is not Quarant.,ed liS accurate or final, and 11 not Intended to foreclose Indo pendent Inquiry.