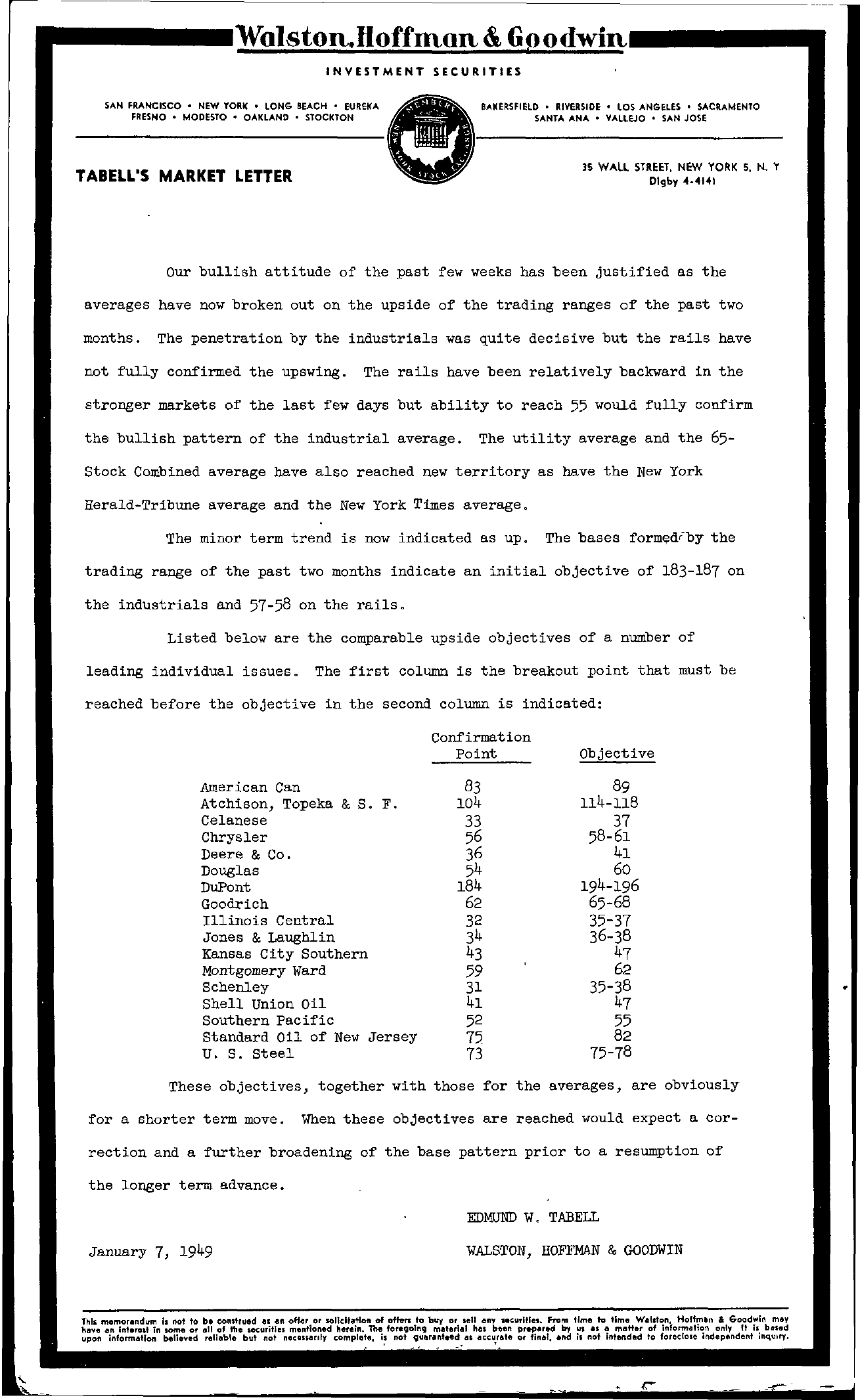 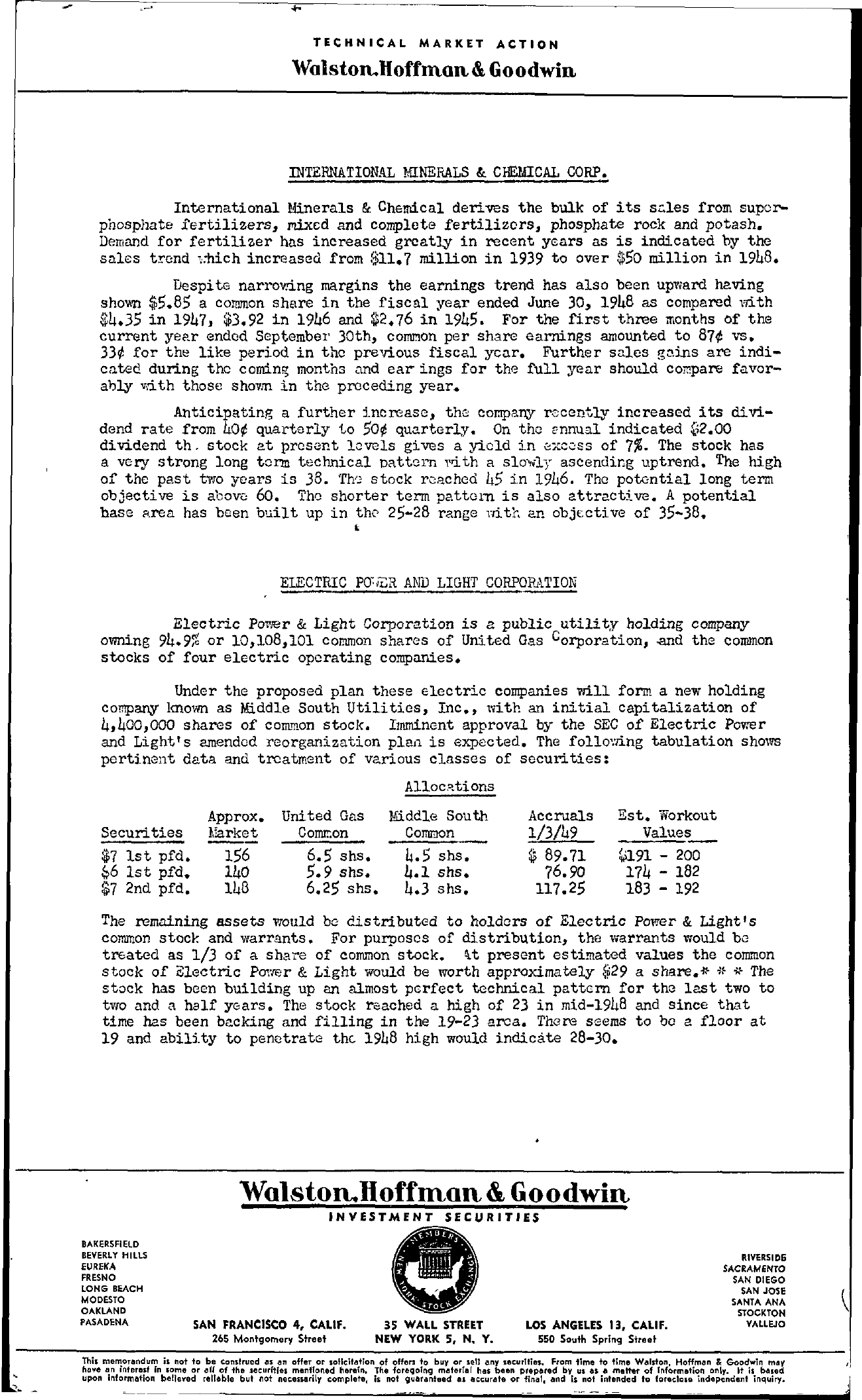 TABELL'S MARKET LETTER 35 WALL STREET, NEW YORK 5, N. Y Digby 4.4141 Our bullish attitude of the past few weeks has been justified as the averages have now broken out on the upside of the trading ranges of the past two months. The penetration by the industrials was quite decisive but the rails have not fully confirmed the upswing. The rails have been relatively backward in the stronger markets of the last few days but ability to reach 55 would fully confirm the bullish pattern of the industrial average. The utility average and the 65- Stock Combined average have also reached new territory as have the New York Herald-Tribune average and the New York Times average. The minor term trend is now indicated as up. The bases formd'by the trading range of the past two months indicate an initial objective of 183-187 on the industrials and 57-58 on the rails. Listed below are the comparable upside objectives of a number of leading individual issues. The first column is the breakout point that must be reached before the objective in the second column is indicated Confirmation Point Objective American Can Atchison, Topeka &S. F. Celanese Chrysler Deere & Co. Douglas DuPont Goodrich Illinois Central Jones &Laughlin Kansas City Southern Montgomery Ward Schenley Shell Union Oil Southern Pacific Standard Oil of New Jersey U. S. Steel 83 104 33 56 36 54 184 62 32 34 43 59 31 41 52 75 73 89 114-118 37 58-61 41 60 194-196 65-68 35-37 36-38 47 62 35-38 47 55 82 75-78 These objectives, together with those for the averages, are obviously for a shorter term move. When these objectives are reached would expect a cor- rection and a further broadening of the base pattern prior to a resumption of the longer term advance. EDMUND W. TABELL January 7, 1949 WALSTON, HOFFMAN & GOODWIN this memorandum I. not to b. eonstrued oI!II an oH.r or sol1cllatlOfl of often to buy or lell eny IKuritiet. From time to time Walston, Hoffman & Goodwin mllly have an Intero,f In .ome or ell of ffle lOCurities mentioned herein. The fore901n9 material hes bHn pr..pa,ed by us ., a metter of information only It is baSed upon information believed reliable but not ntlcular.l.,. complet., i not qUllrant.ed al accrlltft or final, and il not intended to foreclose independent inqUiry. – TECHNICAL MARKET ACTION Wolston.Hoffmon &, Goodwin. INTERNATIONAL MINERALS &. CHEMICAL CORP. International Minerals &Chemical derives the bulk of its s41e5 from super- phosphate fertilizers, Mixed and complete fertilizrs, phosphate rock and potash. Demand for fertilizer has increased greatly in recent years as is indicated by the 5n18s trend ,hich increased from 11.7 million in 1939 to over 50 million in 1948. Despite narrOwing margins the earnings trend has also been upward h2.ving shown 5.85 a common share in the fiscal year ended June 30, 1948 as compared with 4.35 in 1947, S3.92 in 1946 and 2.76 in 1945. For the first three months of the current yee.r ended September 30th, common per share earnings amounted to 87 VB. 33 for the like peried in the previous fiscal ycar. Further sales gnins are indicated during the comin months and earings for the full year should compare favorallly with those shovm in the preceding year. Anticipating a further increase, th8 companY recently increased its divi- dend rate from 40 quarterly to 50 qUD.rterly. On the nnua1 indicated 02.00 dividend th. stock e.t present levels gives a yiald Ln 2XC;)SS of 7. The stock has a very strong long term technical pattern ,'1 th a slo-l) ascending uptrend. The high of the past two years is 36. 'fh'J stock roached 45 in 1946. 'fhe potGntinl long term objective is abOV0 60. Tho shorter term pattern is also attractive. A potential base l.rea has been built up in th0 25-28 range ,-Ii t)-, an objective of 35-38. ElECTRIC POiLR AND LIGHT CORPORATION Electric Povrer & Light Corporation is a public utility holding company owning 94.9 or 10,108,101 common shares of United Gas Corporation, d the common stocks of four electric operating companies. Under the proposed plan these electric companies vlill form a new holding companY knovm as Middle South Utilities, Inc., with an initial capitalization of 4,400,000 shares of com!J1.on stock. Iuuninent approval by the SEC of Electric Power and Light's amendod reorganization plail is exp8cted. The folloling tabulation shows pertinent data and treatment of various classes of securities Alloc,'\tions Securities 7 1st pfd. ;'6 1st pfd. 7 2nd pfd. Approx. – -Market 156 140 148 United Gas Middle Sou th Comrr.on Common 6.5 shs. 4.5 shs. 5.9 shs. 4.1 shs. 6.25 shs. 4.3 shs. Accruals 1/3/49 89.71 76.90 117.25 Est. Workout Values 91 – 200 174 – 182 183 – 192 The remaining assets would be distributed to holders of Electric Power & Light's common stock and warrants. For purposes of distribution, the warrants would bo treated as 1/3 of stock of Electric a share Power & of common stock. t Light would be worth present estimated approximately 29 values the common a share. -1.' The stock has bcen building up an almost perfect technical pattern for the last two to tvro nnd a half YGars. The stock raached a high of 23 in mid-1948 and since that time has been backing and filling in the 19-23 area. There seems to bo a floor at 19 and abilHy to pen8trate the. 1948 high would indicate 28-30. Wolston.Hoffmon &, Goodwin INVESTMENT SECURITIES BAKERSFI ElD BEVERLY HiltS EUREKA FRESNO LONG BEACH MODESTO OAKLAND PASADENA. SAN 'RANCISCO 4, CALIF. 265 Montgomery Street 35 WALL STREET NEW YORK 5, N. Y. LOS ANGELES 13. CALIF. 550 South Spring Street RIVERSIDE; SACRAMENTO SAN DIEGO SAN JOSE SANTA ANA STOCKTON VALLEJO This memorandum is not to be construed as an offer or solicitation of offers to buy or StU any securities. From time to time Walnon. Hoffman & Goodwin mllV hove an interest in some or o!Iff of the securffles ment10ned hernin. The foregoing mll!teriaf has been prepo!Ired bv us as II! metter of Information only. It is bll!sed upon informo!ltlon believed reliable but not necenarily complete, Is not gUo!Ifanteed as accurate or final, and ts not intended to foreclose independent inquiry.