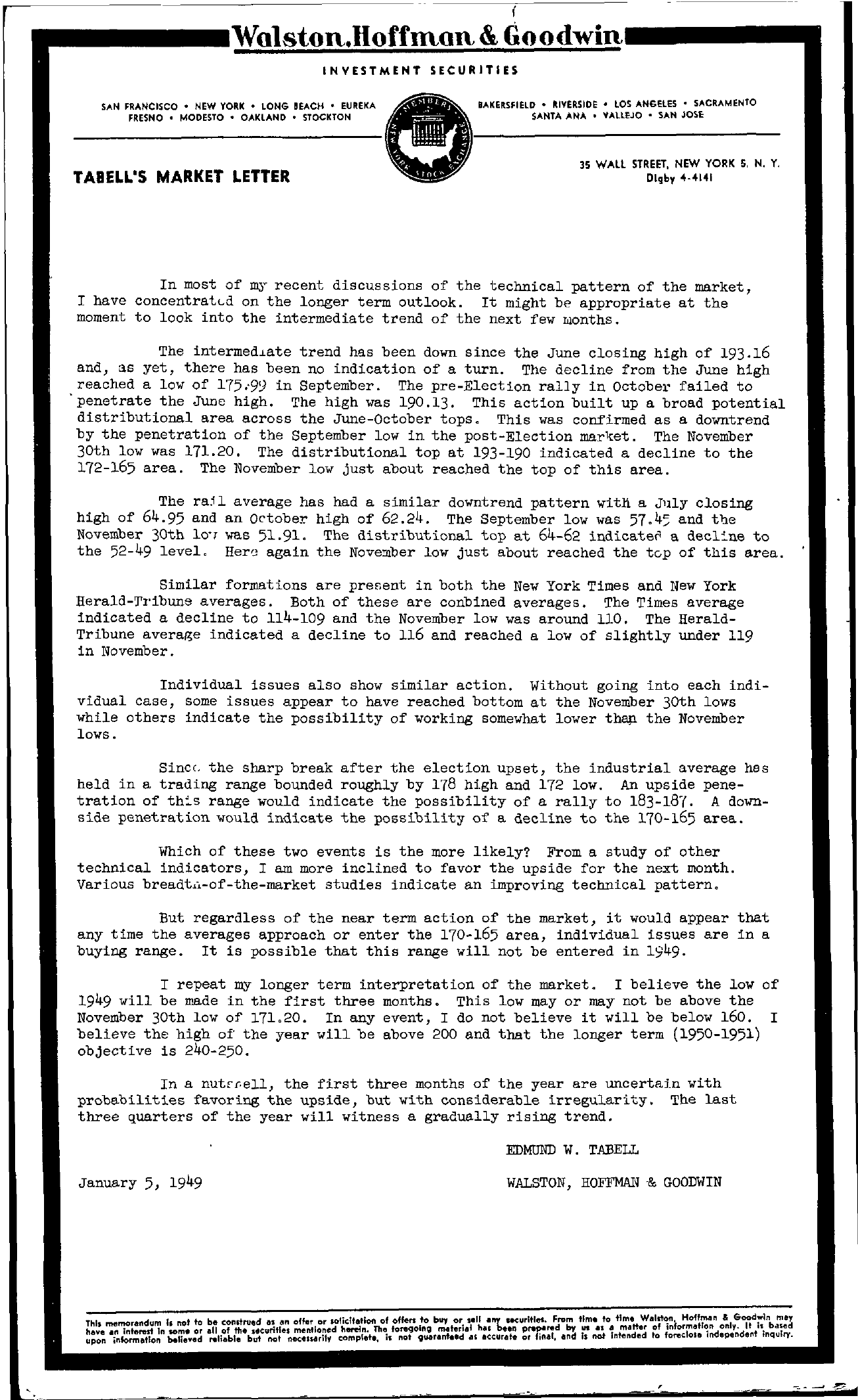 TABELL'S MARKET LETTER 35 WALL STREET, NEW YORK 5, N. Y. Olqby 4-4141 In most of my recent discussions of the technical pattern of the market, I have concentratLd on the longer term outlook. It might be appropriate at the moment to look into the intermediate trend of the next few hlonths. The intermediate trend has been down since the June closing high of 193.16 and, as yet, there has been no indication of a turn. The decline from the June high reached a low of 175 ..99 in September. The pre-Election rally in October failed to penetrate the June high. The high was 190.13. This action built up a broad potential distributional area across the June-October tops. This was confirmed as a downtrend by the penetration of the September low in the post-Election maret. The November 30th low was 171.20. The distributional top at 193-190 indicated a decline to the 172-165 area. The November low just about reached the top of this area. The rajl average has had a similar downtrend pattern with a J111y closing high of 64.95 and an October high of 62.24. The September low was 57.45 and tbe November 30th 10 was 51.91. The distributional top at 64-62 indicater a declne to the 52-49 level. Here again the November low just about reached the tGp of this area. Similar formations are present in both the New York Times and New York Herald-Tribune averages. Both of these are conbined averages. The Times average indicated a decline to 114-109 and the November low was around 110. The HeraldTribune average indicated a decline to 116 and reached a low of slightly under 119 in November. Individual issues also show similar action. Without going into each individual case, some issues appear to have reached bottom at the November 30th lows while others indicate the possibility of working somewhat lower t the November lows. Since the sharp break after the election upset, the industrial average liss held in a trading range bounded roughly by 178 high and 172 low. An upside penetration of ths range would indicate the possibility of a rally to 183-18,. A down- side penetration would indicate the possibility of a decline to the 170-165 area. Which of these two events is the more likely From a study of other technical indicators, I am more inclined to favor the upside for the next month. Various breadtli-of-the-market stUdies indicate an improving technical pattern. But regardless of the near term action of the market, it would appear that any time the averages approach or enter the 170-165 area, individual issues are in a buying range. It is possible that this range will not be entered in 1949. I repeat my longer term interpretation of the market. I believe the low of 1949 will be made in the first three months. This low mayor may not be above the November 30th low of 171.20. In any event, I do not believe it will be below 160. I believe the high of' the year will be above 200 and that the longer term (1950-1951) objective is 240-250. In a nuter.ell, the first three months of the year are uncertaln with probabilities favoring the upside, but with considerable irregularity. The last three quarters of the year will witness a gradually rising trend. EDMOND W. TABELL January 5, 1949 WALSTON, HOFFMAN& GOODWIN , t