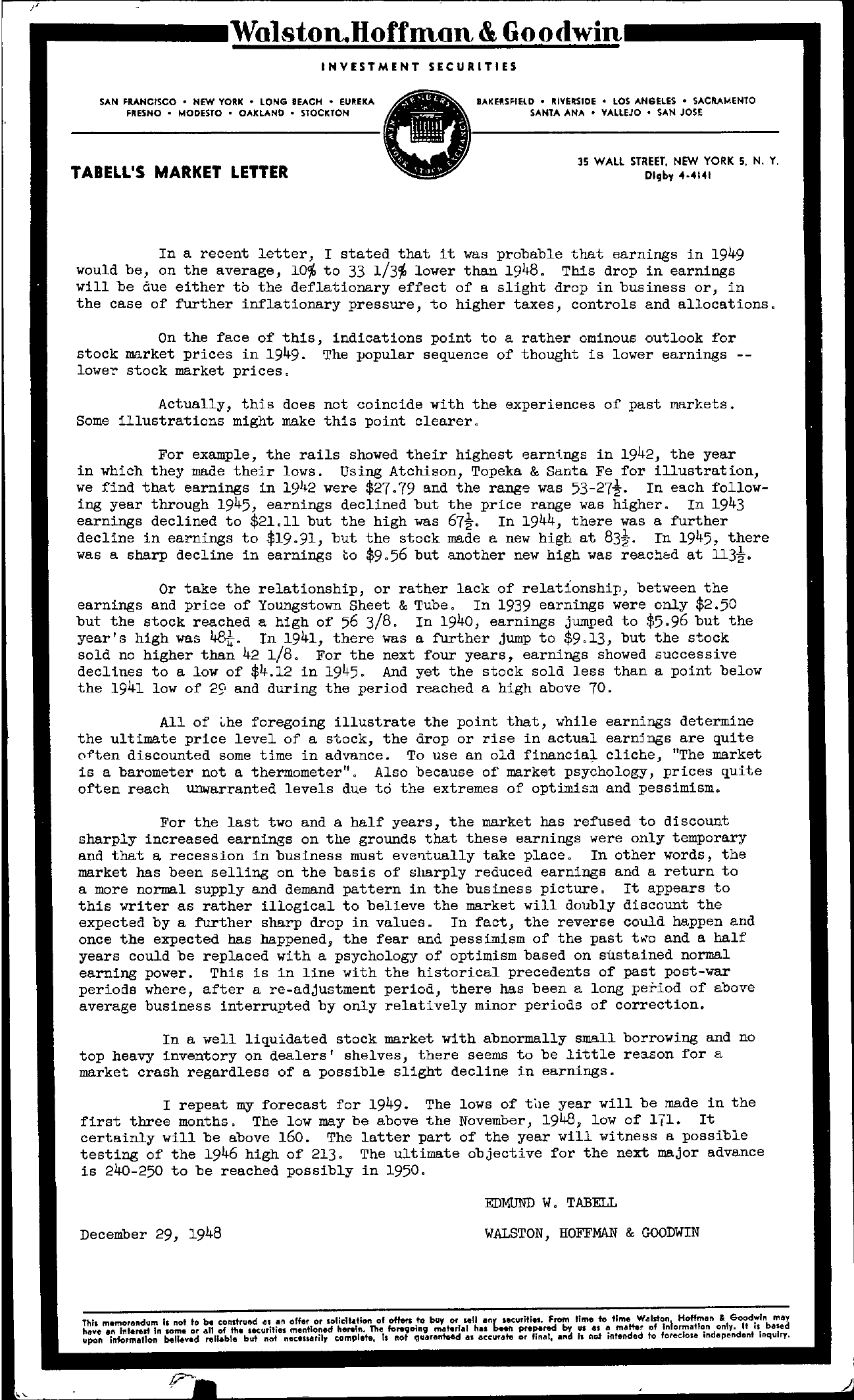 ;' INVESTMENT SECURITIES SAN FRANCISCO NfW YORK LONG lEACH EUREKA FRESNO MODESTO OAKLAND STOCKTON BAKERSFiElD RIVERSIDE lOS AN&ELES SACRAMENTO SANTA ANA. VALLEJO. SAN Jose TABELL'S MARKET LETTER l5 WAll STREET. NEW YORK 5. N. Y. Digby 44141 In a recent letter, I stated that it was probable that earnings in 1949 would be, on the average, 10 to 33 1/3 lower than 1948. This drop in earnings will be due either tb the deflationary effect of a slight drop in business or, in the case of further inflationary pressure, to higher taxes, controls and allocations. On the face of this, indications point to a rather ominous outlook for stock market prices in 1949. The popular sequence of thought is lower earnings — lowe stock market prices. Actually, this does not coincide with the experiences of past markets. Some illustrations might make this point clearer. For example, the rails showed their highest earni.ngs in 1942, the year in which they made their lows. Using Atchison, Topeka & Santa Fe for illustration, we find that earnings in 1942 were 27.79 and the range was 53-27i. In each following year through 1945, earnings declined but the price range was higher. In 1943 earnings declined to 21.11 but the high was 67i. In 1944, there was a further decline in earnings to 19.91, but the stock made a new high at 83i. In 1945, there was a sharp decline in earnings to 9.56 but another new high was reacod at 113i. Or take the relationship, or rather lack of relationship, between the earnings and price of Youngstown Sheet & Tube. In 1939 earnings were only 2.50 4ei.but the stock reached a high of 56 3/8. In 1940, earnings jumped to 5.96 but the year's high was In 1941, there was a further jump to 9.13, but the stock sold no higher than 42 1/8. For the next four years, earnings showed successive declines to a low of 4.12 in 1945. And yet the stock sold less than a point below the 1941 low of 29 and during the period reached a high above 70. All of che foregoing illustrate the point that, while earnings determine the ultimate price level of a stock, the drop or rise in actual earnjngs are quite o-l'ten discounted some time in advance. To use an old financiaj. cliche, The market is a barometer not a thermometer. Also because of market psychology, prices quite often reach unwarranted levels due to the extremes of optimis and pessimism. For the last two and a half years, the market has refused to discount sharply increased earnings on the grounds that these earnings were only temporary and that a recession in business must eveDtually take place. In other words, the market has been selling on the basis of slmrply reduced earnings and a return to a more normal supply and demand pattern in the business picture. It appears to this writer as rather illogical to believe the market will doubly discount the expected by a further sharp drop in values. In fact, the reverse could happen and once the expected has happened, the fear and peSSimism of the past to and a half years could be replaced with a psychology of optimism based on sustained normal earning power. This is in line with the historical precedents of past post-war periods where, after a re-adjustment period, there has been a long period of above average business interrupted by only relatively minor periods of correction. In a well liquidated stock market with abnormally small borrowing and no top heavy inventory on dealers' shelves, there seems to be little reason for a market crash regardless of a possible slight decline in earnings. I repeat my forecast for 1949. The lows of t;le year will be made in the first three months. The low may be above the November, 1948, low of lTl. It certainly will be above 160. The latter part of the year will witness a possible testing of the 1946 high of 213. The ultimate objective for the next major advance is 240-250 to be reached possibly in 1950. December 29, 1948 EDMUND W. TABELL WALSTON, HOFFMAN & GOODWIN This have manem'o,,r'aarnednumIn Il,Onmoet to or upon information believed b. eormruod es an offer or solidt.tlon of offers to buy or lell any securities. From all of the reUabie securTtio. mentioned but not necessarily cho.m..p.llne.teT,heIs10n'o9t01'C1l1arm.nattoeerdiaal s h bMn accurate prepantd by or linal, lind tIme to time W.!llrton Hoffmltn & Goodln may us .s a matter of InTormatl,!n only. It II based II not intended to foreclose lAde pendent Inquiry,