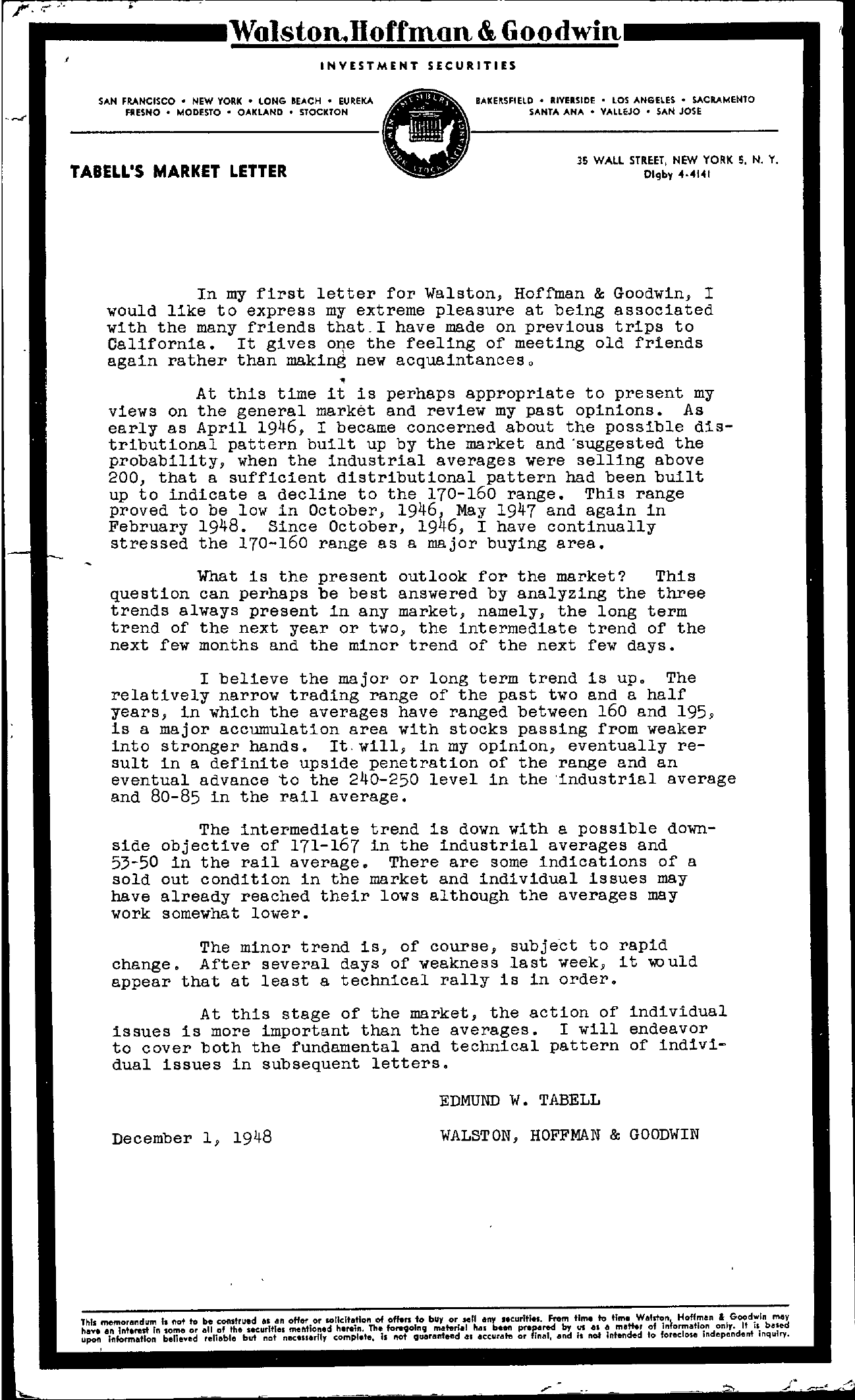 r''''' INVESTMENT SECURITIES SAN FRANCISCO NEW YORK LONG BEACH EUREKA FRESNO MODESTO OAKLAND STOCKTON BAKEkSFIElD RIVERSIDE LOS ANGELES. SACRAMENTO SANTA AHA VALLEJO SAN JOSE TABELL'S MARKET LETTER 35 WALL STREET, NEW YORK 5, N. Y. DI9by 44141 In my first letter for Walston, Hoffman & Goodwin, I would like to express my extreme pleasure at being associated with the many friends that.I have made on previous trips to California. It gives oe the feeling of meeting old friends again rather than making new acquaintances, At this time it is perhaps appropriate to present my views on the general market and review my past opinions. As early as April 1946, I became concerned about the possible distributional pattern built up by the market and 'suggested the probability, when the industrial averages were selling above 200, that a sufficient distributional pattern had been built up to indicate a decline to the 170-160 range. This range proved to be low in October, 1946 May 1947 and again in February 1948. Since October, 1946, I have continually stressed the 170-160 range as a major buying area. What is the present outlook for the market This question can perhaps be best answered by analyzing the three trends always present in any market, namely, the long term trend of the next year or two, the intermediate trend of the next few months and the minor trend of the next few days. I believe the major or long term trend is up. The relatively narrow trading range of the past two and a half years, in which the averages have ranged between 160 and 195, is a major accumulation area with stocks passing from weaker into stronger hands. It, will, in my opinion, eventually result in a definite upside penetration of the range and an eventual advance to the 240-250 level in the industrial average and 80-85 in the rail average. The intermediate trend is down with a possible downside objective of 171-167 in the industrial averages and 53-50 in the rail average. There are some indications of a sold out condition in the market and individual issues may have already reached their lows although the averages may work somewhat lower. The minor trend is, of course, subje'ct to rapid change. After several days of weakness last week, it would appear that at least a technical rally is in order. At this stage of the market, the action of individual issues is more important than the averages. I will endeavor to cover both the fundamental and technical pattern of individual issues in subsequent letters. EDMUND W. TABELL December 1, 1948 WALSTON, HOFFMAN & GOODWIN This memorandum t. not to be constrLted as an offer or sollcTt.flon of offen to buy or MIll any .eturTtiH. From tllTlfl to tlIM Walston\ Hoffman & Goodln mey ha. an Int.rest In some or all of the securities mefttioned herein. The foretoln9 materiel has been prepared by us a. a mathr of 'n,ormatlon only. It IS bued upon Information believed reliable but not necessarily compl.te, is ftOf Quoranteed as eCCI,Irate or final, and II not Inhtnded to fOfedoUl independent inquIry. ..'-…, -.,