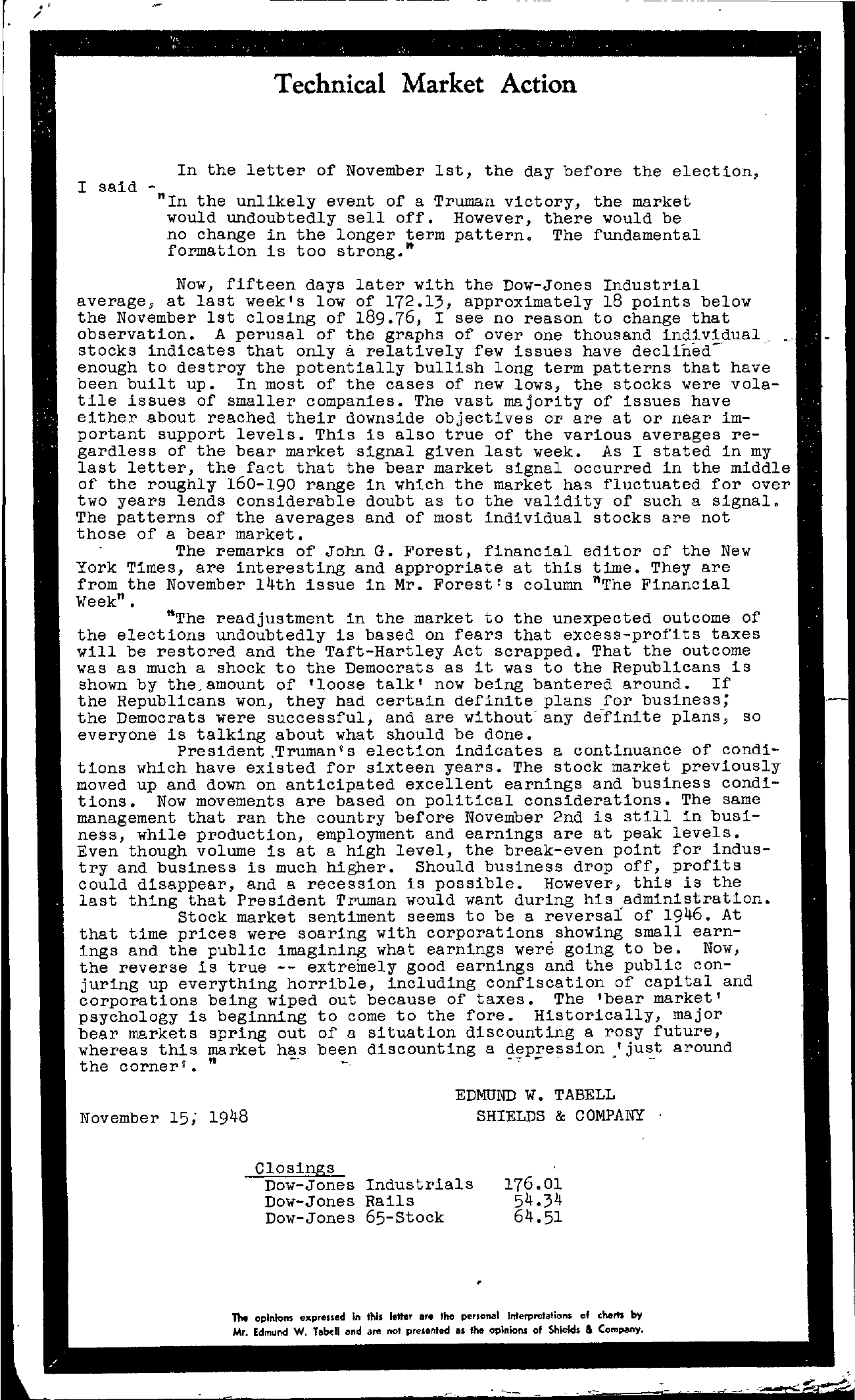 / ' – – – – – – – – – – – —— – —————- Technical Market Action In the letter of November 1st, the day before the election, I said – In the unlikely event of a Truman victory, the market would undoubtedly sell off. However, there would be no change in the longer term pattern. The fundamental formation is too strong. Now, fifteen days later with the Dow-Jones Industrial average, at last week's low of 172.13, approximately 18 pOints below the November 1st closing of 189.76, I see no reason to change that observation. A perusal of the graphs of over one thousand individual stocks indicates that only a relatively few issues have declined- enough to destroy the potentially bullish long term patterns that have been built up. In most of the cases of new lows, the stocks were vola- tile issues of smaller companies. The vast majority of issues have either about reached their downside objectives or are at or near im- portant support levels. This is also true of the various averages re- gardless of the bear market signal given last week. As I stated in my last letter, the fact that the bear market signal occurred in the middle of the roughly 160-190 range in which the market has fluctuated for over two years lends considerable doubt as to the validity of such a signal. The patterns of the averages and of most individual stocks are not those of a bear market. The remarks of John G. Forest, financial editor of the New York Times, are interesting and appropriate at this time. They are from the November 14th issue in Mr. Forest's column The Financial Week RThe readjustment in the market to the unexpected outcome of the elections undoubtedly is based on fears that excess-profits taxes will be restored and the Taft-Hartley Act scrapped. That the outcome was as much a shock to the Democrats as it was to the Republicans is shown by the,amount of 'loose talk' now being bantered around. If the Republicans won, they had certain definite plans for business; the Democrats were successful, and are without any definite plans, so everyone is talking about what should be done. President,Trumanis election indicates a continuance of condi- tions which have existed for sixteen years. The stock market previously moved up and down on anticipated excellent earnings and business condi- tions. Now movements are based on political considerations. The same management that ran the country before November 2nd is still in busi- ness, while production, employment and earnings are at peak levels. Even though volume is at a high level, the break-even pOint for indus- try and business is much higher. Should business drop off, profits could disappear, and a recession is possible. However, this is the last thing that President Truman would want during his administration. Stock market sentiment seems to be a reversai of 1946. At that time prices were soaring with corporations showing small earn- ings and the public imagining what earnings were going to be. Now, the reverse is true — extremely good earnings and the public con- juring up everything horrible, including confiscation of capital and corporations being wiped out because of taxes. The 'bear market' psychology is beginning to come to the fore. Historically, major bear markets spring out of a situation discounting a rosy future, whereas this market has been discounting a depression .'just around the corner!. II — — – – – — November 15; 1948 EDMUND W. TABELL SHIELDS & COMPANY Closings Dow-Jones Industrials Dow-Jones Rails Dow-Jones 65-Stock 176.01 54.34 64.51 The opinions expressed in this letter are the personal Interpretations of cherts by Mr. Edmund W. labell and are not presented as lhe opinions of Shields &. Company. —