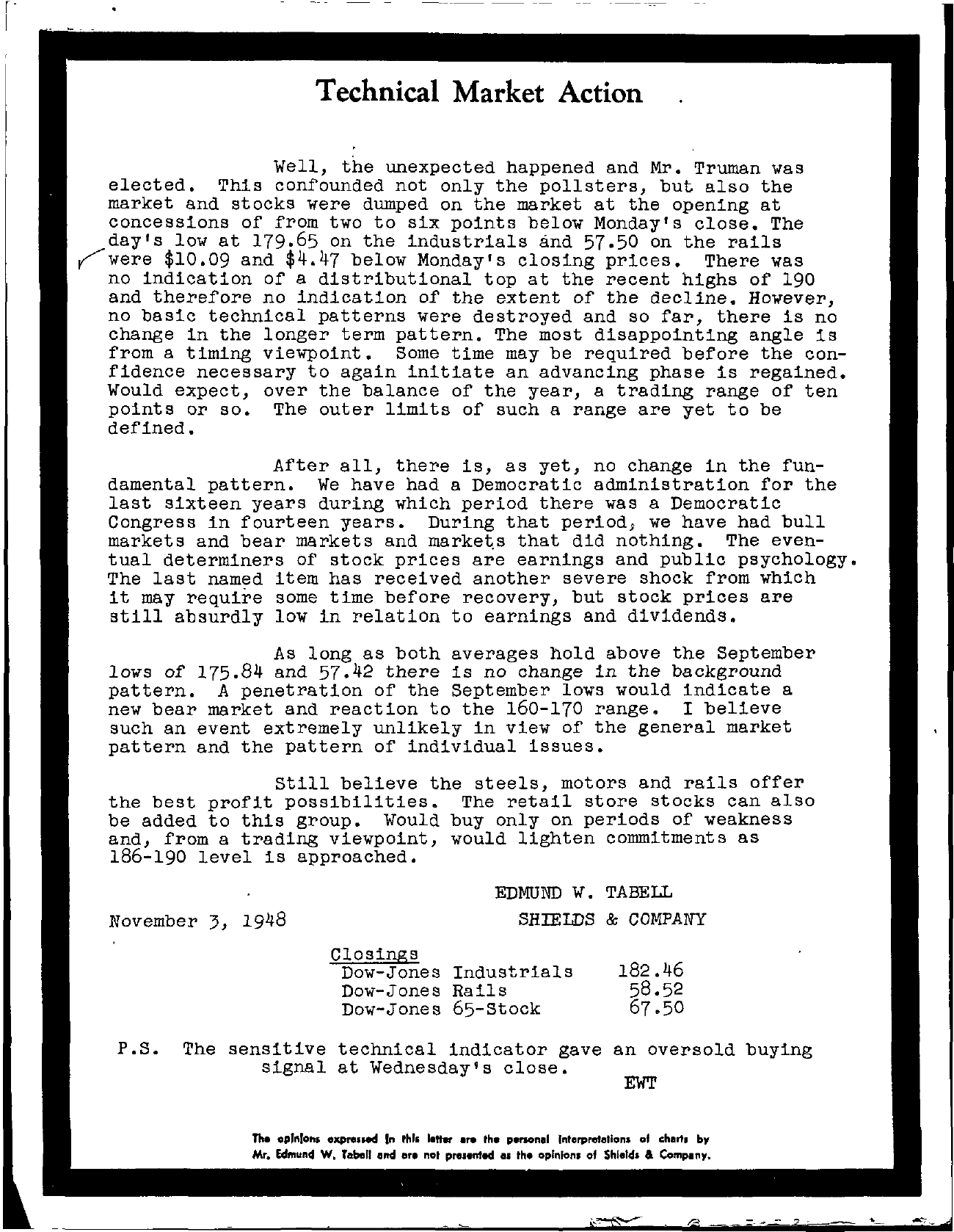 r- I Technical Market Action Well, the unexpected happened and Mr. Truman was elected. This confounded not only the pollsters, but also the market and stocks were dumped on the market at the opening at concessions of from two to six pOints below Monday's close. The day's low at 179.65 on the industrials and 57.50 on the rails were 10.09 and 4.47 below Monday's closing prices. There was no indication of a distributional top at the recent highs of 190 and therefore no indication of the extent of the decline. However, no basic technical patterns were destroyed and so far, there is no change in the longer term pattern. The most disappointing angle is from a timing viewpoint. Some time may be required before the confidence necessary to again initiate an advancing phase is regained. Would expect, over the balance of the year, a trading range of ten pOints or so. The outer limits of such a range are yet to be defined. After all, there is, as yet, no change in the fundamental pattern. We have had a Democratic administration for the last sixteen years during which period there was a Democratic Congress in fourteen years. During that period, we have had bull markets and bear markets and markes that did nothing. The eventual determiners of stock prices are earnings and public psychology. The last named item has received another severe shock from which it may require some time before recovery, but stock prices are still absurdly low in relation to earnings and dividends. As long as both averages hold above the September lows of 175.84 and 57.42 there is no change in the background pattern. A penetration of the September lows would indicate a new bear market and reaction to the 160-170 range. I believe such an event extremely unlikely in view of the general market pattern and the pattern of individual issues. Still believe the steels, motors and rails offer the best profit possibilities. The retail store stocks can also be added to this group. Would buy only on periods of weakness and, from a trading viewpoint, would lighten commitments as 186-190 level is approached. November 3, 1948 EDMUND W. TABELL SHIEUlS & COMPANY Closings Dow-Jones Industrials Dow-Jones Rails Dow-Jones 65-Stock 182.46 58.52 67.50 P.S. The sensitive technical indicator gave an oversold buying signal at Wednesday's close. The opfnfolU oxprellecl In thf, letter .re ,h. personal Interpretations of chan. by Mr. Edmund W. rabel! end are not preJentecl I. the opInion. of Shield, a Compeny. …..—