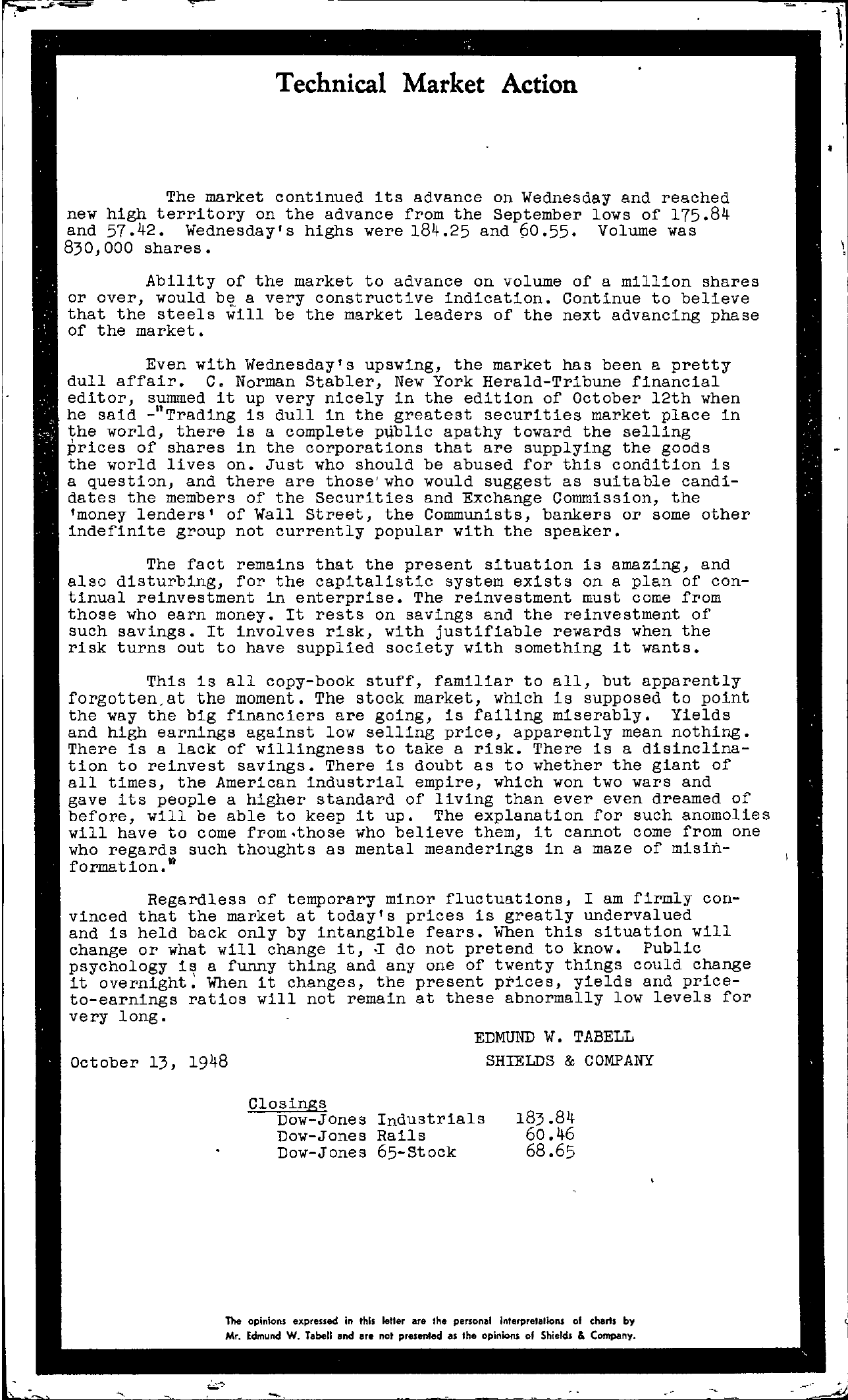 Technical Market Action The market continued its advance on WednesdaY and reached new high territory on the advance from the September lows of 175.84 and 57.42. Wednesday's highs were 184.25 and 60.55. Volume was 830,000 shares. Ability of the market to advance on volume of a million shares or over, would b a very constructive indication. Continue to believe that the steels will be the market leaders of the next advancing phase of the market. Even with Wednesday's upswing, the market has been a pretty affair. C. Norman Stabler, New York Herald-Tribune financial editor, summed it up very nicely in the edition of October 12th when he said -Trading is dull in the greatest securities market place in the world, there is a complete pblic apathy toward the selling prices of shares in the corporations that are supplying the goods the world lives on. Just who should be abused for this condition is a questiQn, and there are those'who would suggest as suitable candidates the members of the Securities and Exchange Commission, the 'money lenders' of Wall Street, the Communists, bankers or some other indefinite group not currently popular with the speaker. The fact remains that the present situation is amazing, and also disturbing, for the capitalistic system exists on a plan of continual reinvestment in enterprise. The reinvestment must come from those who earn money. It rests on savings and the reinvestment of such savings. It involves risk, with justifiable rewards when the risk turns out to have supplied society with something it wants. This is all copy-book stuff, familiar to all, but apparently forgotten,at the moment. The stock market, which is supposed to point the way the big financiers are going, is failing miserably. Yields and high earnings against low selling price, apparently mean nothing. There is a lack of willingness to take a risk. There is a disinclination to reinvest savings. There is doubt as to whether the giant of all times, the American industrial empire, which won two wars and gave its people a higher standard of living than ever even dreamed of before, will be able to keep it up. The explanation for such anomolies will have to come from,those who believe them, it cannot come from one who regards such thoughts as mental meanderings in a maze of misinformation. It Regardless of temporary minor fluctuations, I am firmly conthat the market at today's prices is greatly undervalued held back only by intangible fears. When this situation will change or what will change it, 1 do not pretend to know. Putllic psychology is a funny thing and anyone of twenty things could change it overnight When it changes, the present prices, yields and priceto-earnings ratios will not remain at these abnormally low levels for very long. EDMUND W. TABELL 1948 SHIELDS & COMPANY Closings Dow-Jones Industrials Dow-Jones Rails Dow-Jones 65-Stock 183.84 60.46 68.65 \, The opinions expreued in this letter are the personlll IntefpretalioM of (harts by Mr. Edmund W. Tabell and are not presented as the opinions of Shiekb & Company.