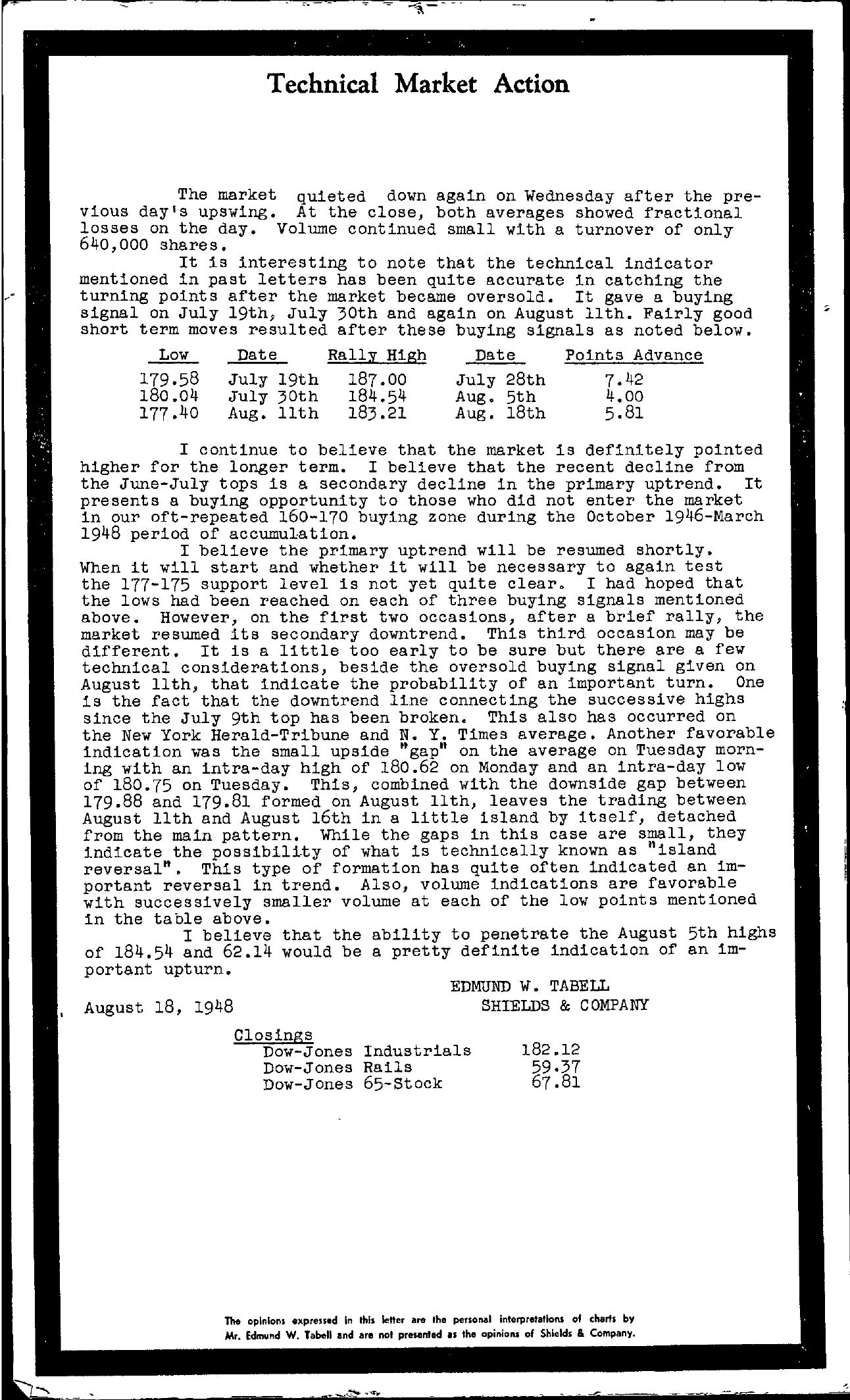 –a- Technical Market Action The market quieted down again on Wednesday after the previous day's upswing. At the close, both averages showed fractional losses on the day. Volume continued small with a turnover of only 640,000 shares. It is interesting to note that the technical indicator mentioned in past letters has been quite accurate in catching the turning pOints after the market became oversold. It gave a buying signal on July 19th, July 30th and again on August 11th. Fairly good short term moves resulted after these buying signals as noted below. Low Date Rally High Date Points Advance 179.58 July 19th 187.00 180.04 July 30th 184.54 177.40 Aug. 11th 183.21 July 28th Aug. 5th Aug. 18th 7.42 4.00 5.81 I continue to believe that the market is definitely pOinted higher for the longer term. I believe that the recent decline from the June-July tops is a secondary decline in the primary uptrend. It presents a buying opportunity to those who did not enter the market in our oft-repeated 160-170 buying zone during the October 1946-March 1948 period of accumulation. I believe the primary uptrend will be resumed shortly. When it will start and whether it will be necessary to again test the 177-175 support level is not yet quite clear. I had hoped that the lows had been reached on each of three buying signals mentioned above. However, on the first two occasions, after a brief rally, the market resumed its secondary downtrend. This third occasion may be different. It is a little too early to be sure but there are a few technical considerations, beside the oversold buying signal given on August 11th, that indicate the probability of an important turn. One is the fact that the downtrend line connecting the successive highs since the July 9th top has been broken. This also has occurred on the New York Herald-Tribune and N. Y. Times average. Another favorable indication was the small upside gap on the average on Tuesday morn- ing with an intra-day high of 180.62 on Monday and an intra-day low of 180.75 on Tuesday. This, combined with the downside gap between 179.88 and 179.81 formed on August 11th, leaves the trading between August 11th and August 16th in a little island by itself, detached from the main pattern. While the gaps in this case are small, they indicate the possibili-ty of what is technically known as island reversal, This type of formation has quite often indicated an im- portant reversal in trend. Also, volume indications are favorable with successively smaller volume at each of the low points mentioned in the table above. r believe that the ability to penetrate the August 5th highs of 184.54 and 62.14 would be a pretty definite indication of an im- portant upturn. EDMUND W. TABELL August 18, 1948 SHIELDS & COMPANY Closings Dow-Jones Industrials Dow-Jones Rails Dow-Jones 65-Stock 182.12 59.37 67.81 The opinions expressed In Ihls ieHer are the personal interpretations of charts by Mr. Edmund W. Tabell and are not presented IS the opinions of Shields & Company.