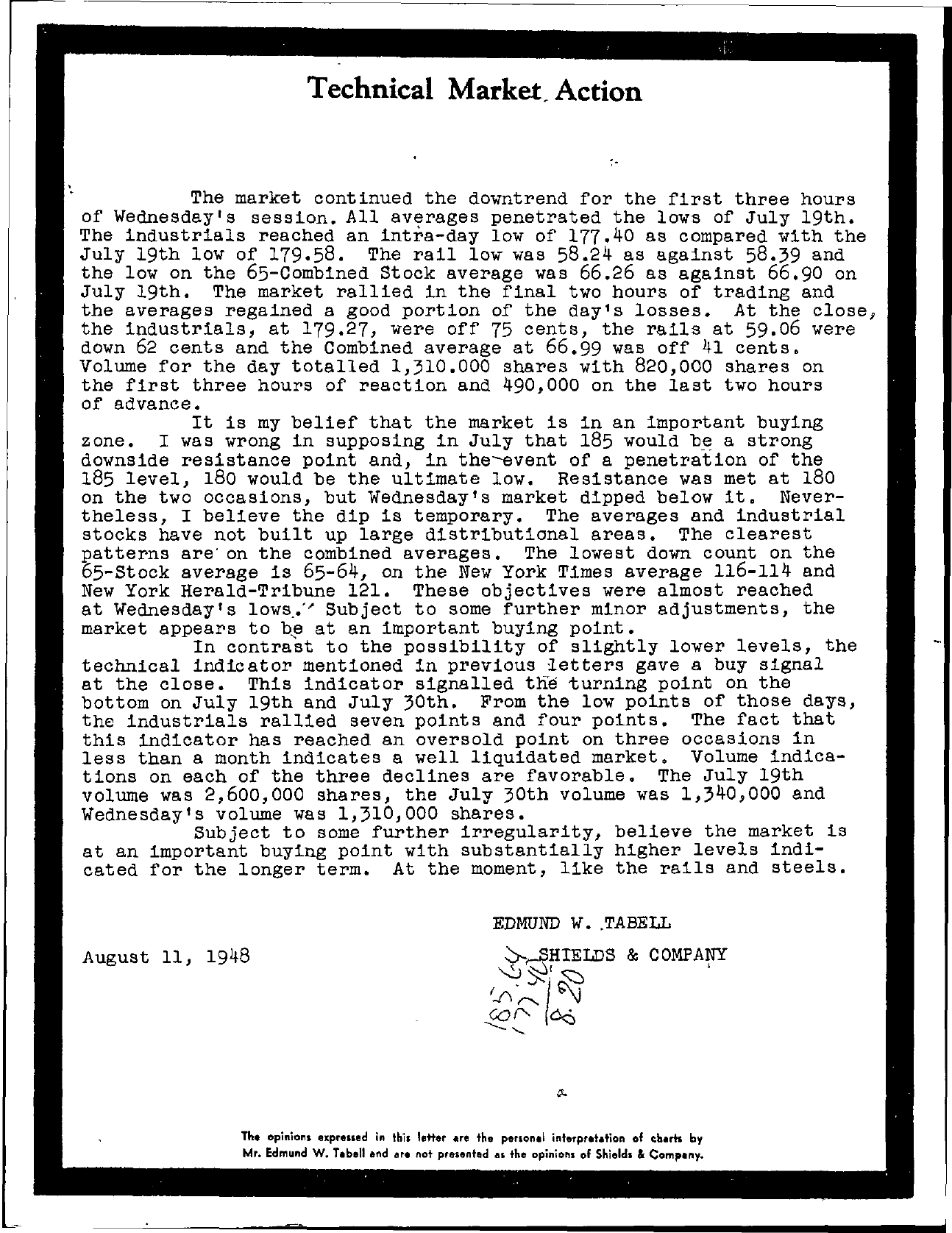 Technical Market. Action The market continued the downtrend for the first three hours of Wednesday's session. All averages penetrated the lows of July 19th. The industrials reached an intra-day low of 177.40 as compared with the July 19th low of 179.58. The rail low was 58.24 as against 58.39 and the low on the 65-Combined Stock average was 66.26 as against 66.90 on July 19th. The market rallied in the final two hours of trading and the averages regained a good portion of the day's losses. At the close, the industrials, at 179.27, were off 75 cents, the rails at 59.06 were down 62 cents and the Combined average at 66.99 was off 41 cents. Volume for the day totalled 1,310.000 shares with 820,000 shares on the first three hours of reaction and 490,000 on the last two hours of advance. It is my belief that the market is in an important buying zone. I was wrong in supposing in July that 185 would be a strong downside resistance point and, in the-event of a penetration of the 185 level, 180 would be the ultimate low. Resistance was met at 180 on the two occaSions, but Wednesday's market dipped below it. Nevertheless, I believe the dip is temporary. The averages and industrial stocks have not built up large distributional areas. The clearest patterns are' on the combined averages. The lowest down count on the 65-Stock average is 65-64, on the New York Times average 116-114 and New York Herald-Tribune 121. These objectives were almost reached at Wednesday's lows. Subject to some further minor adjustments, the market appears to b at an important buying point. In contrast to the possibility of slightly lower levels, the technical indicator mentioned in previous letters gave a buy signal at the close. This indicator signalled tne turning point on the bottom on July 19th and July 30th. From the low pOints of those days, the industrials rallied seven pOints and four points. The fact that this indicator has reached an oversold point on three occasions in less than a month indicates a well liquidated market. Volume indications on each of the three declines are favorable. The July 19th volume was 2,600,000 shares, the July 30th volume was 1,340,000 and Wednesday's volume was 1,310,000 shares. Subject to some further irregularity, believe the market is at an important buying point with substantially higher levels indicated for the longer term. At the moment, like the rails and steels. August 11, 1948 EDMUND W. ,TABELL .SHIElJ)S & COMPANY 2f IJ1 IS\j -0–…0. Th. opinions expressed in this letter are the personal interpr.tation of e.b.rh by Mr. Edmund W. Tab.1I end art not presented .!II the opinions of Shields & ComplnY.