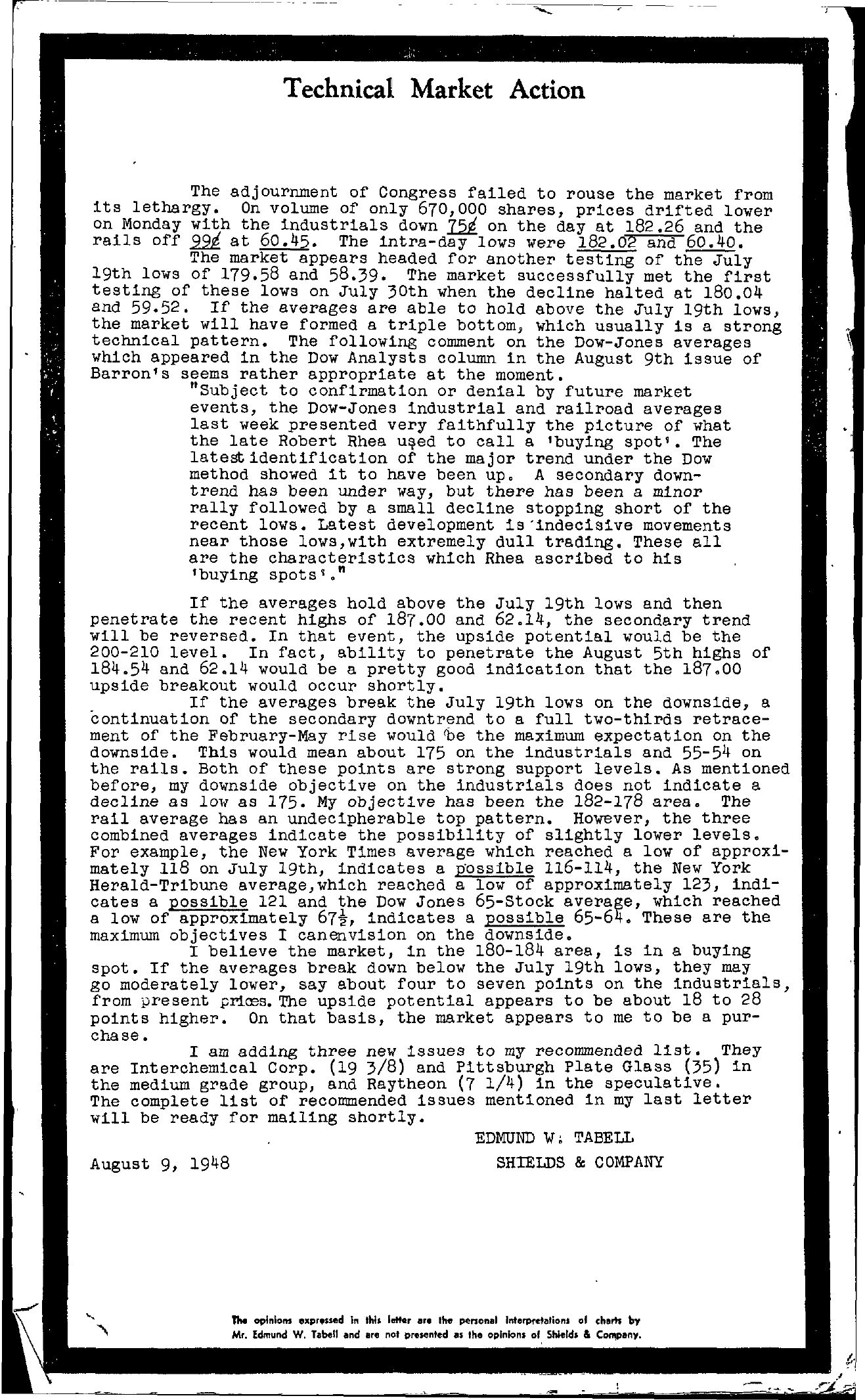 ———— Technical Market Action The adjournment of Congress failed to rouse the market from 12iits lethargy. On volume of only 670,000 shares, prices drifted lower on Monday with the industrials down on the day at 182.26 and the rails off at 60.45. The intra-day lows were 182.02 and 60.40. The market appears headed for another testing of the July 19th lows of 179.58 and 58.39. The market successfully met the first testing of these lows on July 30th when the decline halted at 180.04 and 59.52. If the averages are able to hold above the July 19th lows, the market will have formed a triple bottom, which usually is a strong technical pattern. The following comment on the Dow-Jones averages which appeared in the Dow Analysts column in the August 9th issue of Barron's seems rather appropriate at the moment. Subject to confirmation or denial by future market events, the Dow-Jones industrial and railroad averages last week presented very faithfully the picture of what the late Robert Rhea ued to call a 'buying spot'. The lateidentification of the major trend under the Dow method showed it to have been up, A secondary down- trend has been under way, but there has been a minor rally followed by a small decline stopping short of the recent lows. Latest development is 'indecisive movements near those lows,with extremely dull trading. These all are the characteristics which Rhea ascribed to his 'buying spots', n If the averages hold above the July 19th lows and then penetrate the recent highs of 187.00 and 62,14, the secondary trend will be reversed. In that event, the upside potential would be the 200-210 level. In fact, ability to penetrate the August 5th highs of 184.54 and 62.14 would be a pretty good indication that the 187,00 upside breakout would occur shortly. If the averages break the July 19th lows on the downside, a continuation of the secondary downtrend to a full two-thirds retracement of the February-May rise would (be the maximum expectation on the downside. This would mean about 175 on the industrials and 55-54 on the rails. Both of these pOints are strong support levels. As mentioned before, my downside objective on the industrials does not indicate a decline as low as 175. My objective has been the 182-178 area, The rail average has an undecipherable top pattern. However, the three combined averages indicate the possibility of slightly lower levels. For example, the New York Times average which reached a low of approxi- mately n8 on July 19th, indicates a p'ossible n6-ll4, the New York Herald-Tribune average,which reached a low of approximately 123, indi- cates a possible 121 and the Dow Jones 65-Stock average, which reached a low of approximately 67i, indicates a possible 65-64, These are the maximum objectives I canenvision on the downside. I believe the market, in the 180-184 area, is in a buying spot. If the averages break down below the July 19th lows, they may go moderately lower, say about four to seven pOints on the industrials, from present prires. The upside potential appears to be about 18 to 28 points higher. On that basiS, the market appears to me to be a pur- chase. I am adding three new issues to my recommended list. They are Interchemical Corp. (19 3/8) and Pittsburgh Plate Glass (35) in the medium grade group, and Raytheon (7 1/4) in the speculative. The complete list of recommended issues mentioned in my last letter will be ready for mailing shortly. EDMUND W; TABELL August 9, 1948 SHIELDS & COMPANY 1M opinloM expr,ued in this lett.r ar. the personal Interpretations of cham by Mr. Edmund W. label! and are not presented 81 the opinions of, Shields &; Con,pany,