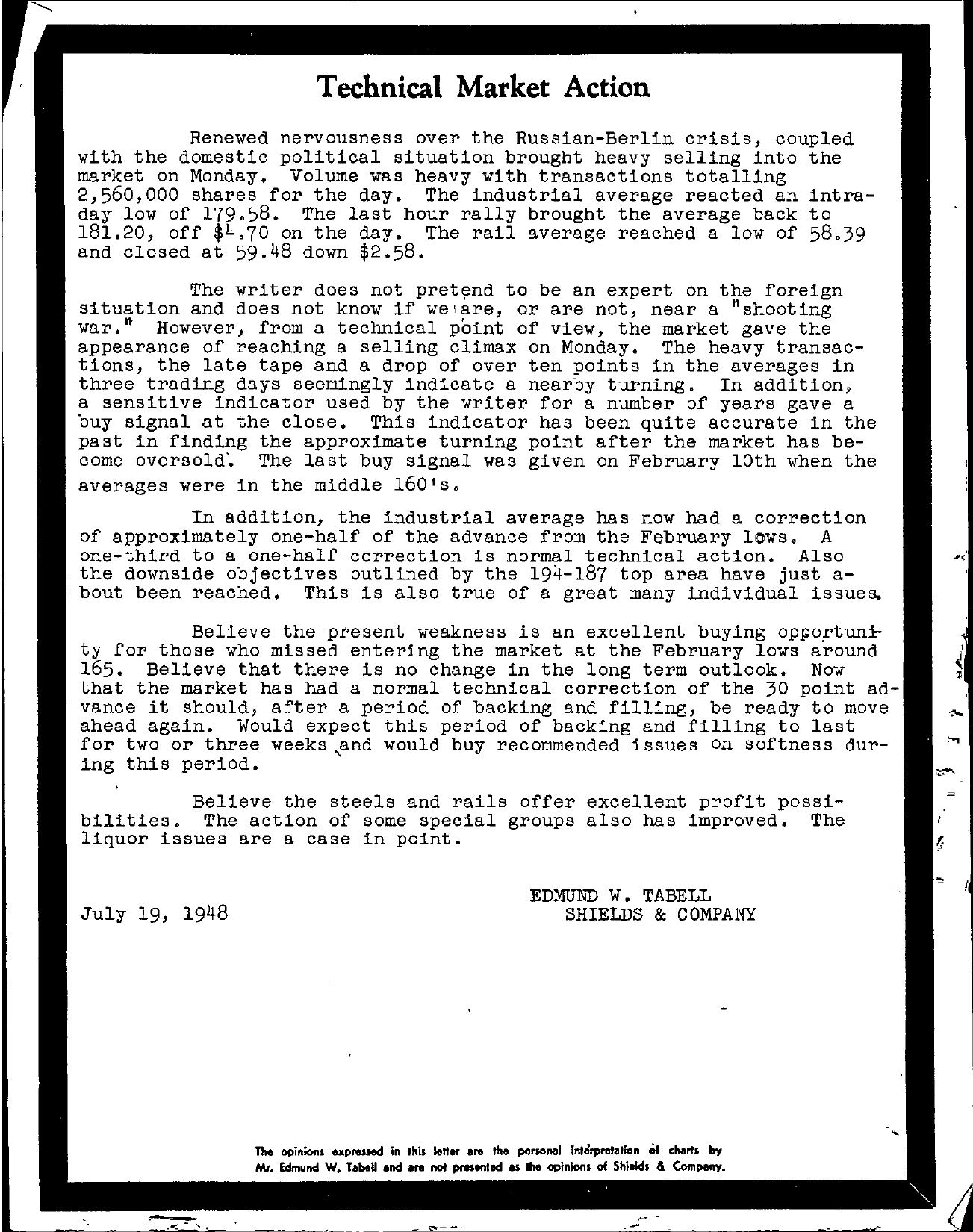 Technical Market Action Renewed nervousness over the Russian-Berlin crisis, coupled with the domestic political situation brought heavy selling into the market on Monday. Volume was heavy with transactions totalling 2,560,000 shares for the day. The industrial average reacted an intraday low of 179.58. The last hour rally brought the average back to 181.20, off 4.70 on the day. The rail average reached a low of 58.39 and closed at 59.48 down 2.58. The writer does not pretnd to be an expert on the foreign situation and does not know if we,are, or are not, near a shooting war. However, from a technical pOint of view, the market gave the appearance of reaching a selling climax on Monday. The heavy transactions, the late tape and a drop of over ten points in the averages in three trading days seemingly indicate a nearby turning. In addition, a sensitive indicator used by the writer for a number of years gave a buy signal at the close. This indicator has been quite accurate in the past in finding the approximate turning point after the market has become oversold'. The last buy signal was given on February 10th when the averages were in the middle 160's. In addition, the industrial average has now had a correction of approximately one-half of the advance from the February lows. A one-third to a one-half correction is normal technical action. Also the downside objectives outlined by the 194-187 top area have just about been reached. This is also true of a great many individual issue Believe the present weakness is an excellent buying oPpoFtun ty for those who missed entering the market at the February lows around 165. Believe that there is no change in the long term outlook. Now that the market has had a normal technical correction of the 30 point advance it should, after a period of backing and filling, be ready to move ahead again. Would expect this period of backing and filling to last for two or three weeksnd would buy recommended issues on softness during this period. Believe the steels and rails offer excellent profit possibilities. The action of some special groups also has improved. The liquor issues are a case in point. July 19, 1948 EDMOND W. TABELL SHIELDS & COMPANY The opinions expressed in this JoHOl are the personal interpretation Of cMrt, by MI. Edmund W. T.beU and aro not od os 1he opinions 01 Shields 6 Company. ;0.— -c