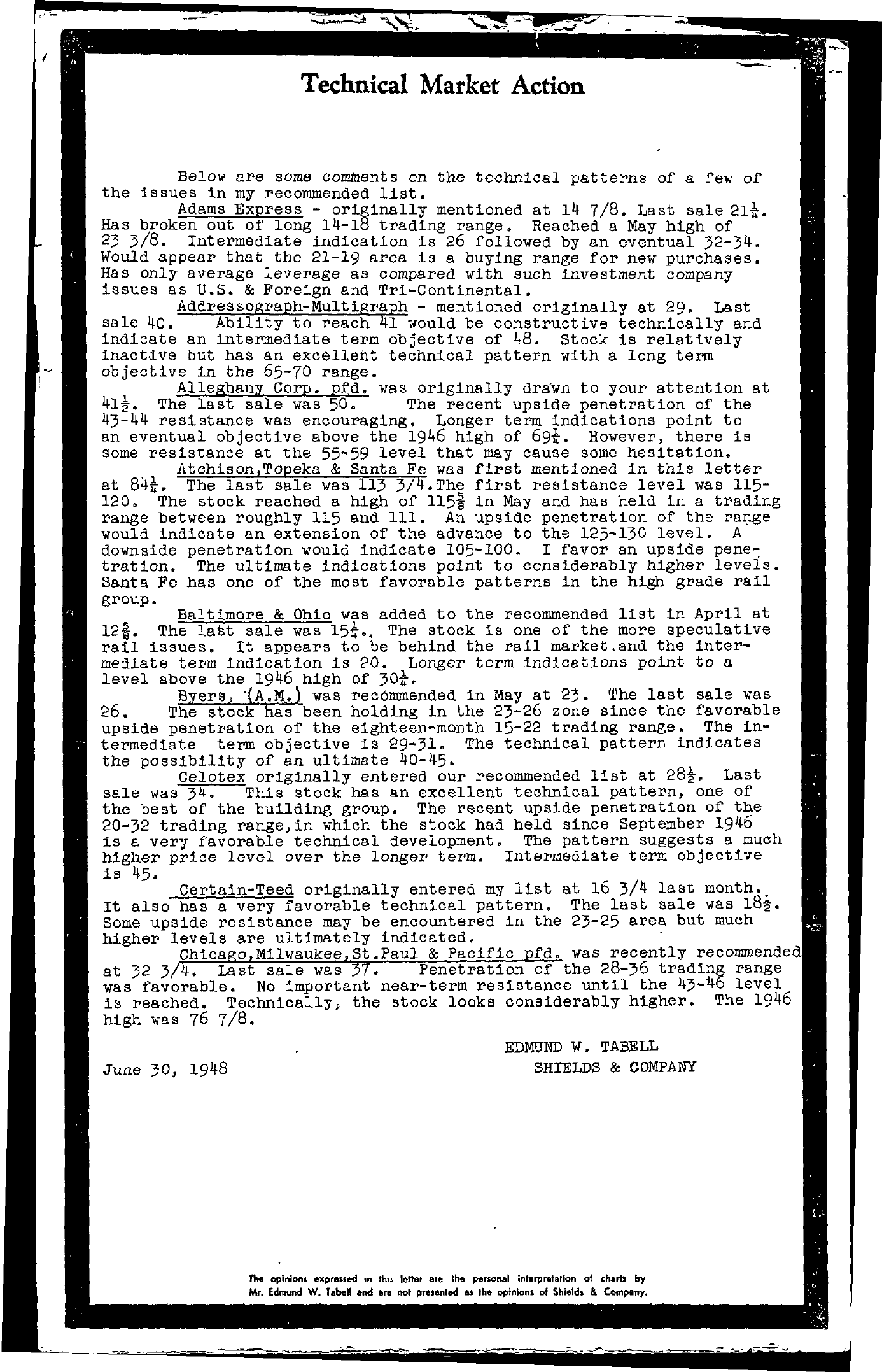 I Technical Market Action Below are some comments on the technical patterns of a few of the issues in my recommended list. Adams Express – originally mentioned at 14 7/8. Last sale 21. Has broken out of long 14-18 trading range. Reached a May high of 23 3/8. Intermediate indication is 26 followed by an eventual 32-34. Would appear that the 21-19 area is a buying range for new purchases. Has only average leverage as compared with such investment company issues as U.S. & Foreign and Tri-Continental. Addressograph-Multigraph – mentioned originally at 29. Last sale 40. Ability to reach 41 would be constructive technically and indicate an intermediate term objective of 48. Stock is relatively inactive but has an excellent technical pattern with a long term objective in the 65-70 range. Alleghany Corp. pfd. was originally drawn to your attention at 41. The last sale was 50. The recent upside penetration of the 43-44 resistance was encouraging. Longer term indications point to an eventual objective above the 1946 high of 69. However, there is some resistance at the 55-59 level that may cause some hesitation. Atchison.Topeka & Santa Fe was first mentioned in this letter at 84k. The last sale was 113 374.The first resistance level was 115- 120. The stock reached a high of 115i in May and has held in a trading range between roughly 115 and Ill. An upside penetration of the range would indicate an extension of the advance to the 125-130 level. A downside penetration would indicate 105-100. I favor an upside pene- tration. The ultimate indications point to considerably higher leveis. Santa Fe has one of the most favorable patterns in the high grade rail group. Baltimore & Ohio was added to the recommended list in April at 12j. The last sale was 15t., The stock is one of the more speculative rail issues. It appears to be behind the rail market.and the inter- mediate term indication is 20. Longer term indications point to a level above the 1946 high of 30k. Byers. (A.M.) was recommended in May at 23. The last sale was 26. The stock has been holding in the 23-26 zone since the favorable upside penetration of the eighteen-month 15-22 trading range. The in- termediate term objective is 29-31. The technical pattern indicates the possibility of an ultimate 40-45. Celotex originally entered our recommended list at 28. Last sale was 34. This stock has an excellent technical pattern, one of the best of the building group. The recent upside penetration of the 20-32 trading range,in which the stock had held since September 1946 is a very favorable technical development. The pattern suggests a much higher price level over the longer term. Intermediate term objective is 45. Certain-Teed originally entered my list at 16 3/4 last month. It also has a very favorable technical pattern. The last sale was 18. Some upside resistance may be encountered in the 23-25 area but much higher levels are ultimately indicated. . Chica 0 Milwaukee St.Paul & Pacific fd. was recently recommende at 32 3 Last sale was 37. Penetration of the 28-36 trading range was favorable. No important near-term resistance until the 43-46 level is reached. Technically, the stock looks considerably higher. The 1946 high was 76 7/8. June 30, 1948 EDMOND W. TABELL SHIELDS & COMPANY The opinions expressed In thIS letter Brl! the personal interpretation of cherts by Mr. Edmund W. label! and are not Prolanteel as the opinions of Shields & Comptlny.