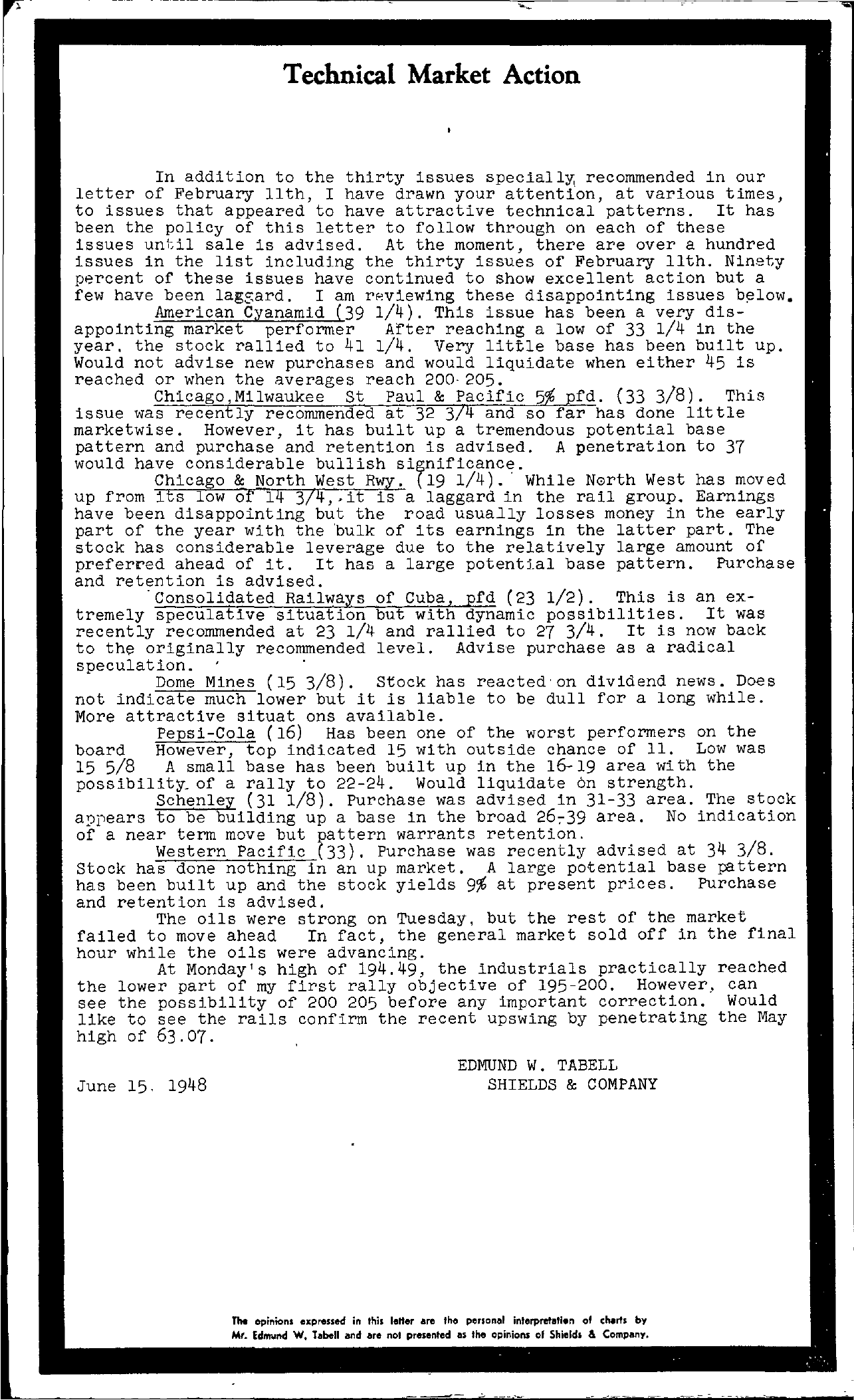 Technical Market Action In addition to the thirty issues speciall recommended in our letter of February 11th, I have drawn your attention, at various times, to issues that appeared to have attractive technical patterns. It has been the policy of this letter to follow through on each of these issues until sale is advised. At the moment, there are over a hundred issues in the list including the thirty issues of February 11th. Ninety percent of these issues have continued to show excellent action but a few have been laggard. I am rRviewing these disappointing issues blow. American Cyanamid (39 1/4). This issue has been a very dis- appointing market performer After reaching a low of 33 1/4 in the year. the stock rallied to 41 1/4. Very little base has been built up. Would not advise new purchases and would liquidate when either 45 is reached or when the averages reach 200205. Chicago ,Milwaukee St Paul & Pacific 5 f. (33 3/8). This issue was recen ly recommended at 32 3 and so far has done little marketwise. However, it has built up a tremendous potential base pattern and purchase and retention is advised. A penetration to 37 would have considerable bullish sinificance. Chicago & North West Rwy. (19 1/4).' While N0rth West has moved up from its low of 14 3!4,.it is a laggard in the rail group. Earnings have been disappointing but the road usually losses money in the early part of the year with the 'bulk of its earnings in the latter part. The stock has considerable leverage due to the relatively large amount of preferred ahead of it. It has a large potenti.al base pattern. Purchase and retention is advised . . Consolidated Railways of Cuba, pfd (23 1/2). This is an ex- tremely speculative situation but with dynamic possibilities. It was recently recommended at 23 1/4 and rallied to 27 3/4. It is now back to the originally recommended level. Advise purchase as a radical speculation. . Dome Mines (15 3/8). Stock has reacted on dividend news. Does not indicate much lower but it is liable to be dull for a long while. More attractive situat ons available. Pepsi-Cola (16) Has been one of the worst performers on the board However, top indicated 15 with outside chance of 11. Low was 15 5/8 A small base has been built up in the 16-19 area with the possibilit of a rally to 22-24. Would liquidate on strength. Schenley (31 1/8). Purchase was adVised in 31-33 area. The stock appears to be building up a base in the broad 2639 area. No indication of a near term move but pattern warrants retention. Western Pacific (33). Purchase was recently advised at 34 3/8. Stock has done nothing in an up market. A large potential base pattern has been built up and the stock yields 9 at present prices. Purchase and retention is advised. The oils were strong on Tuesday, but the rest of the market failed to move ahead In fact, the general market sold off in the final hour while the Oils were advancing. At Monday's high of 194.49, the industrials practically reached the lower part of my first rally objective of 195-200. However, can see the possibility of 200 205 before any important correction. Would like to see the rails confirm the recent upswing by penetrating the May high of 63.07. June 15. 1948 EDMUND W. TABELL SHIELDS & COMPANY The opinions expressed in this leHer are the personal interpretalien 01 ch.rts by MI. Edmund W. labell and are not presented as the opinions of Shields &. Company,