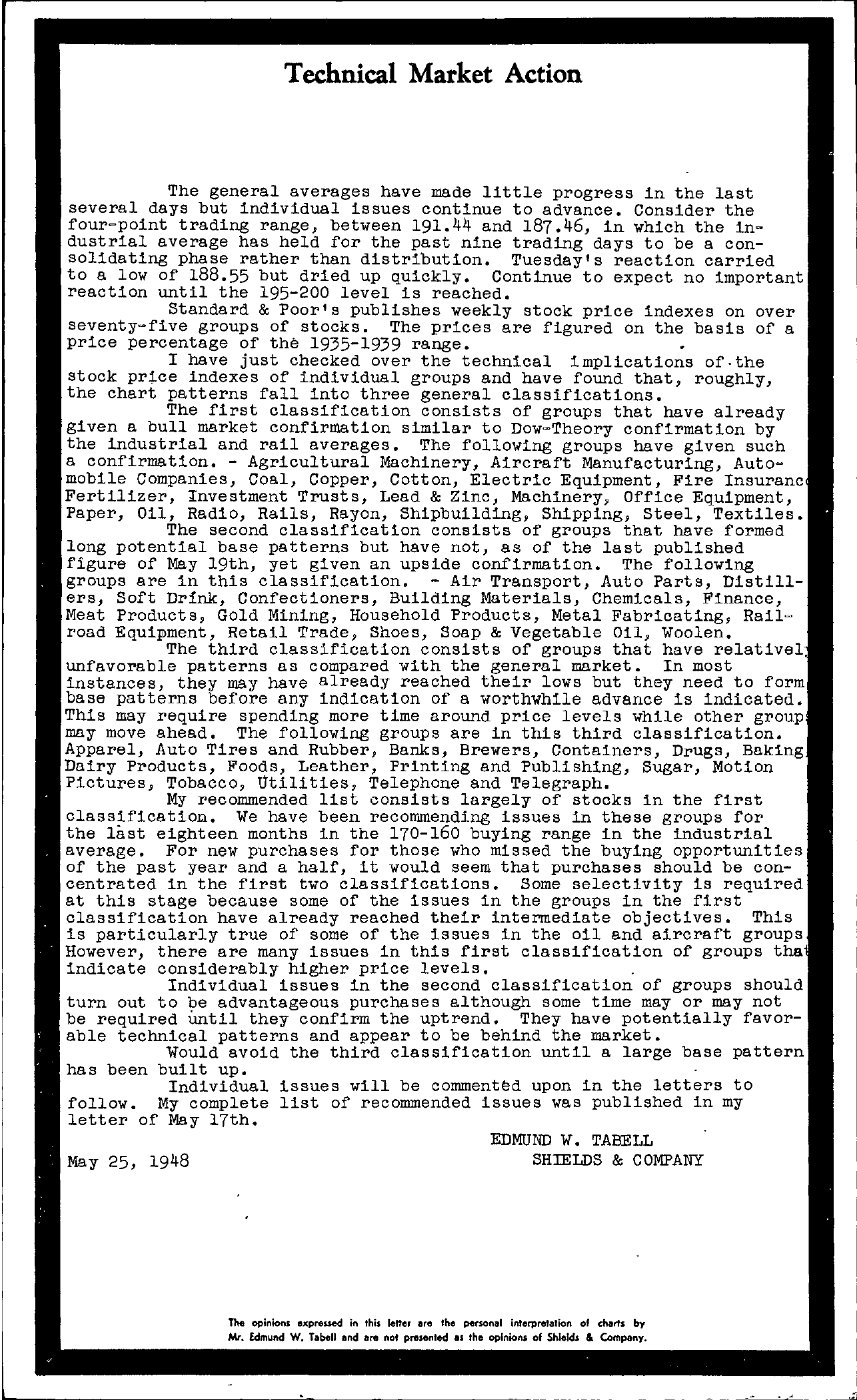 Technical Market Action The general averages have made little progress in the last several days but individual issues continue to advance. Consider the four-point trading range, between 191.44 and 187.46, in which the industrial average has held for the past nine trading days to be a con- solidating phase rather than distribution. Tuesday's reaction carried to a low of 188.55 but dried up quickly. Continue to expect no important reaction until the 195-200 level is reached. Standard & Poor's publishes weekly stock price indexes on over seventy-five groups of stocks. The prices are figured on the basis of a price percentage of the 1935-1939 range. I have just checked over the technical implications of.the stock prtce indexes of individual groups and have found that, roughly, the chart patterns fall into three general classifications. The first classification consists of groups that have already given a bull market confirmation similar to DowTheory confirmation by the industrial and rail averages. The following groups have given such a confirmation. – Agricultural Machinery, Aircraft Manufacturing, Auto- mobile Companies, Coal, Copper, Cotton, Electric Equipment, Fire In Fertilizer, Investment Trusts, Lead & Zinc, Machinery, Office Equipment, Paper, Oil, Radio, Rails, Rayon, Shipbuilding, Shipping, Steel, Textiles. The second classification consists of groups that have formed long potential base patterns but have not, as of the last published figure of May 19th, yet given an upside confirmation. The following groups are in this classification. – Air Transport, Auto Parts, Distill- ers, Soft Drink, Confectioners, Building Materials, Chemicals, Finance, Meat Products, Gold Mining, Household Products, Metal Fabricating, Railroad Equiment, Retail Trade, Shoes, Soap & Vegetable Oil, Woolen. The third classification consists of groups that have relati unfavorable patterns as compared with the general market. In most instances, they may have already reached their lows but they need to base patterns before any indication of a worthwhile advance is indicated. This may require spending more time around price levels while other may move ahead. The following groups are in this third classificati Apparel, Auto Tires and Rubber, Banks, Brewers, Containers, Drugs, Dairy Products, Foods, Leather, Printing and Publishing, Sugar, Motion Pictures, Tobacco, Utilities, Telephone and Telegraph. My recommended list consists largely of stocks in the first classification. We have been recommending issues in these groups for the last eighteen months in the 170-160 buying range in the industrial average. For new purchases for those who missed the buying opportunities of the past year and a half, it would seem that purchases should be concentrated in the first two classifications. Some selectivity is required at this stage because some of the issues in the groups in the first classification have already reached their intermediate objectives. This is particularly true of some of the issues in the oil and aircraft groups However, there are many issues in this first classification of groups indicate considerably higher price levels. . Individual issues in the second classification of groups should turn out to be advantageous purchases although some time mayor may not be required Until they confirm the uptrend. They have potentially favor- able technical patterns and appear to be behind the market. Would avoid the third classification until a large base pattern has been built up. Individual issues will be commented upon in the letters to follow. My complete list of recommended issues was published in my letter of May 17th. EDMUND W. TABELL SHIELDS & COMPANY The opinions expressed in this Jetter are the personal interpretation of charts by Mr. fdmund W. Tallell and are no' presented as the opinions of Shields & CoMpany.