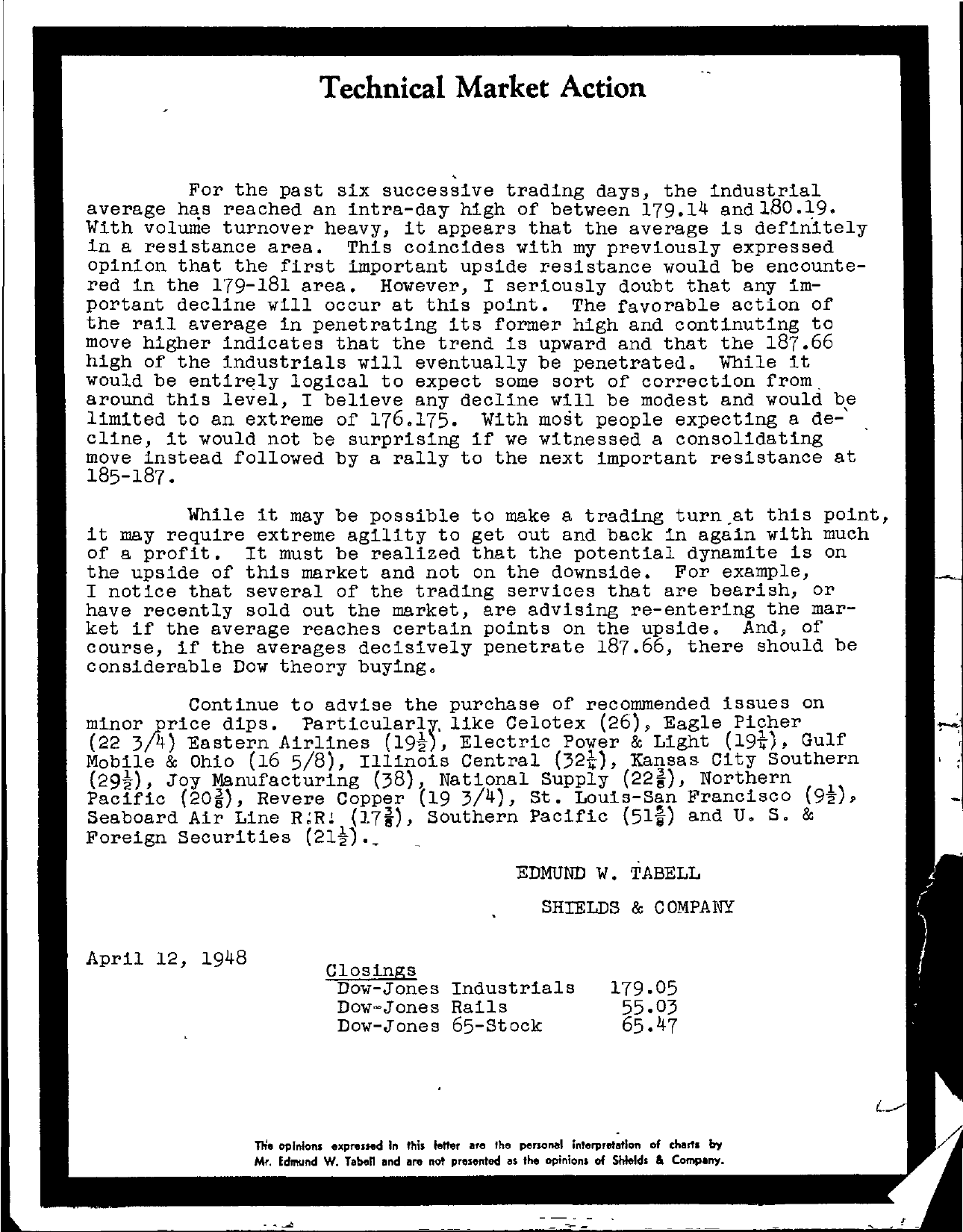 Technical Market Action , For the past six successive trading days, the industrial average has reached an intra-day high of between 179.14 and 180.19. With volunie turnover heavy, it appears that the average is defin'itely in a resistance area. This coincides with my previously expressed opinion that the first important upside resistance would be encountered in the 1'79-181 area. However, I seriously doubt that any important decline will occur at this point. The favorable action of the rail average in penetrating its former high and continuting to move higher indicates that the trend is upward and that the 18'7.66 high of the industrials will eventually be penetrated. While it would be entirely logical to expect some sort of correction from, around this level, I believe any decline will be modest and would be limited to an extreme of 176.175. With most people expecting a de-' cline, it would not be surprising if we witnessed a consolidating move instead followed by a rally to the next important resistance at 185-187. While it may be possible to make a trading turn,at this point, it may require extreme agility to get out and back in again with much of a profit. It must be realized that the potential dynamite is on the upside of this market and not on the dOwnside. For example, I notice that several of the trading services that are bearish, or have recently sold out the market, are advising re-entering the market if the average reaches certain pOints on the upside. And, of course, if the averages decisively penetrate 187.66, there should be considerable Dow theory buying. Continue to advise the purchase of recommended issues on minor rice dips. Particularl like Celotex (26), Eagle Picher (22 3/4) Eastern Airlines (19t), Electric Power & Light (19), Gulf Mobile & Ohio (16 5/8), Illinois Central (32), Kansas City Southern (29t) , Joy Manufacturing (38), National Supply (22i), Northern 1 Pacific (2oi), Revere Copper (19 3/4), St. Louis-San Francisco (92)' Seaboard Air Line R;R, (l'7i) , Southern Pacific (51i) and U. S. & Foreign Securities (21t). EDMUND W. TABELL SHIELDS & COMPANY April 12, 1948 Closings Dow-Jones Industrials Dow-Jones Rails Dow-Jones 65-Stock 179.05 55.03 65.47 nre opinions oxpnllSed In 'his fetter ate the personal interpretation of charts by Mr. Edmund W. Taben and are not presented as the opinions of Shields a. CompInY. , …..