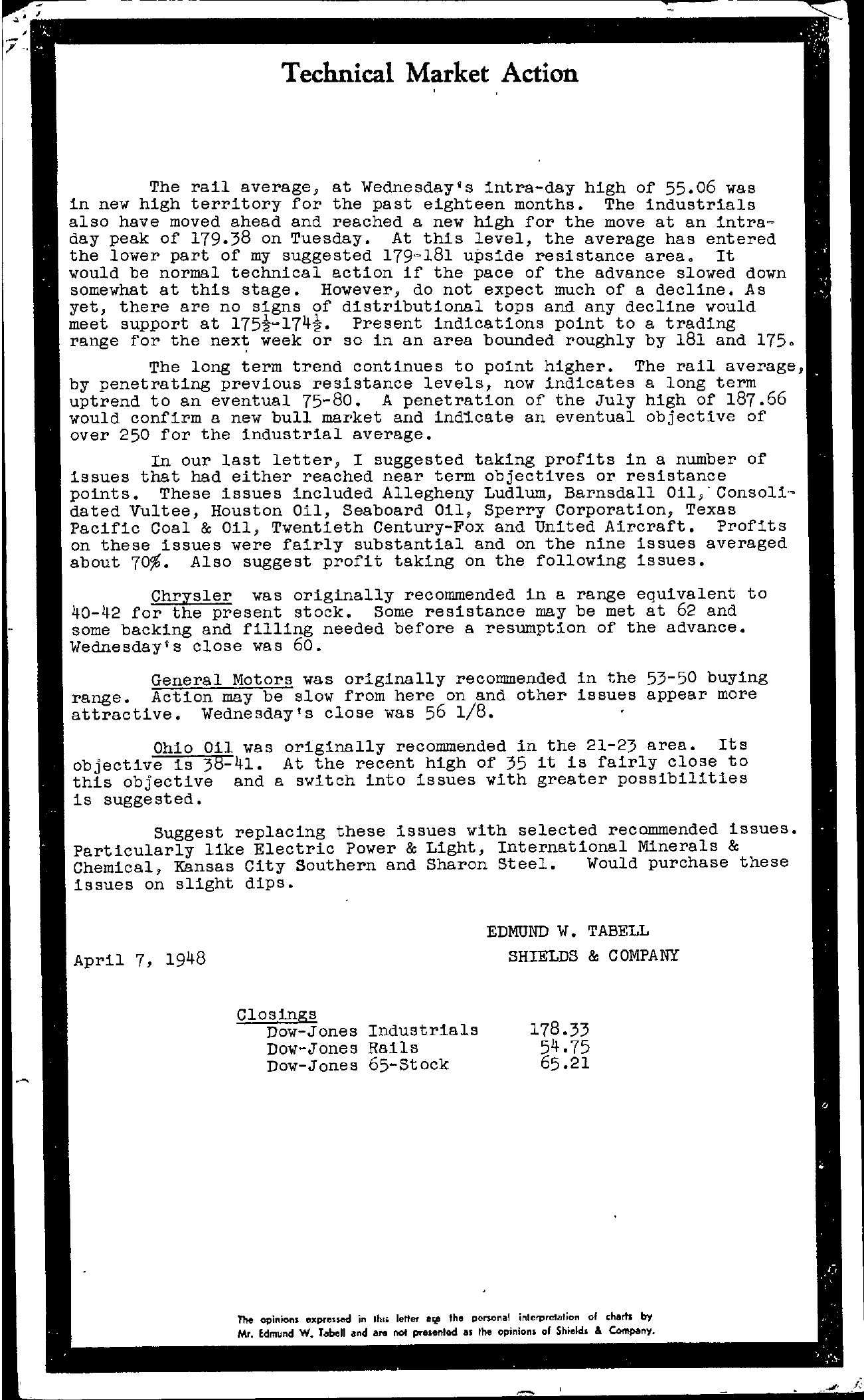 Technical Market Action The rail average, at Wednesday's intra-day high of 55.06 was in new high territory for the past eighteen months. The industrials also have moved ahead and reached a new high for the move at an intraday peak of 179.38 on Tuesday. At this level, the average has entered the lower part of my suggested 179181 upside resistance area. It would be normal technical action if the pace of the advance slowed down somewhat at this stage. However, do not expect much of a decline. As yet, there are no signs of distributional tops and any decline would meet support at 175-174. Present indications pOint to a trading range for the next week or so in an area bounded roughly by 181 and 175. The long term trend continues to point higher. The rail average, by penetrating previous resistance levels, now indicates a long term uptrend to an eventual 75-80. A penetration of the July high of 187.66 would confirm a new bull market and indicate an eventual objective of over 250 for the industrial average. In our last letter, I suggested taking profits in a number of issues that had either reached near term objectives or resistance points. These issues included Allegheny Ludlum, Barnsdall Oil, Consoli'dated Vultee, Houston Oil, Seaboard Oil, Sperry Corporation, Texas Pacific Coal & Oil, Twentieth Century-Fox and United Aircraft. Profits on these issues were fairly substantial and on the nine issues averaged about 70. Also suggest profit taking on the following issues. Chrysler was originally recommended in a range equivalent to 40-42 for the present stock. Some resistance may be met at 62 and some backing and filling needed before a resumption of the advance. Wednesday's close was 60. General Motors was originally recommended in the 53-50 buying range. Action may be slow from here on and other issues appear more attractive. Wednesday's close was 56 1/8. Ohio Oil was originally recommended in the 21-23 area. Its objective is 38-41. At the recent high of 35 it is fairly close to this objective and a switch into issues with greater possibilities is suggested. Suggest replacing these issues with selected recommended issues. Particularly like Electric Power & Light, International Minerals & Chemical, Kansas City Southern and Sharon Steel. Would purchase these issues on slight dips. April 7, 1948 EDMUND W. TABELL SHIELDS & COMPANY Closings Dow-Jones Industrials Dow-Jones Rails Dow-Jones 65-Stock 178.33 54.75 65.21 The opinions expressed in 'hi' letter BfA' the personal inlerprotolltion of cherb by Mr. Edmund W. Tabel! and are not presented 81 the opinions of Shields &. Company.