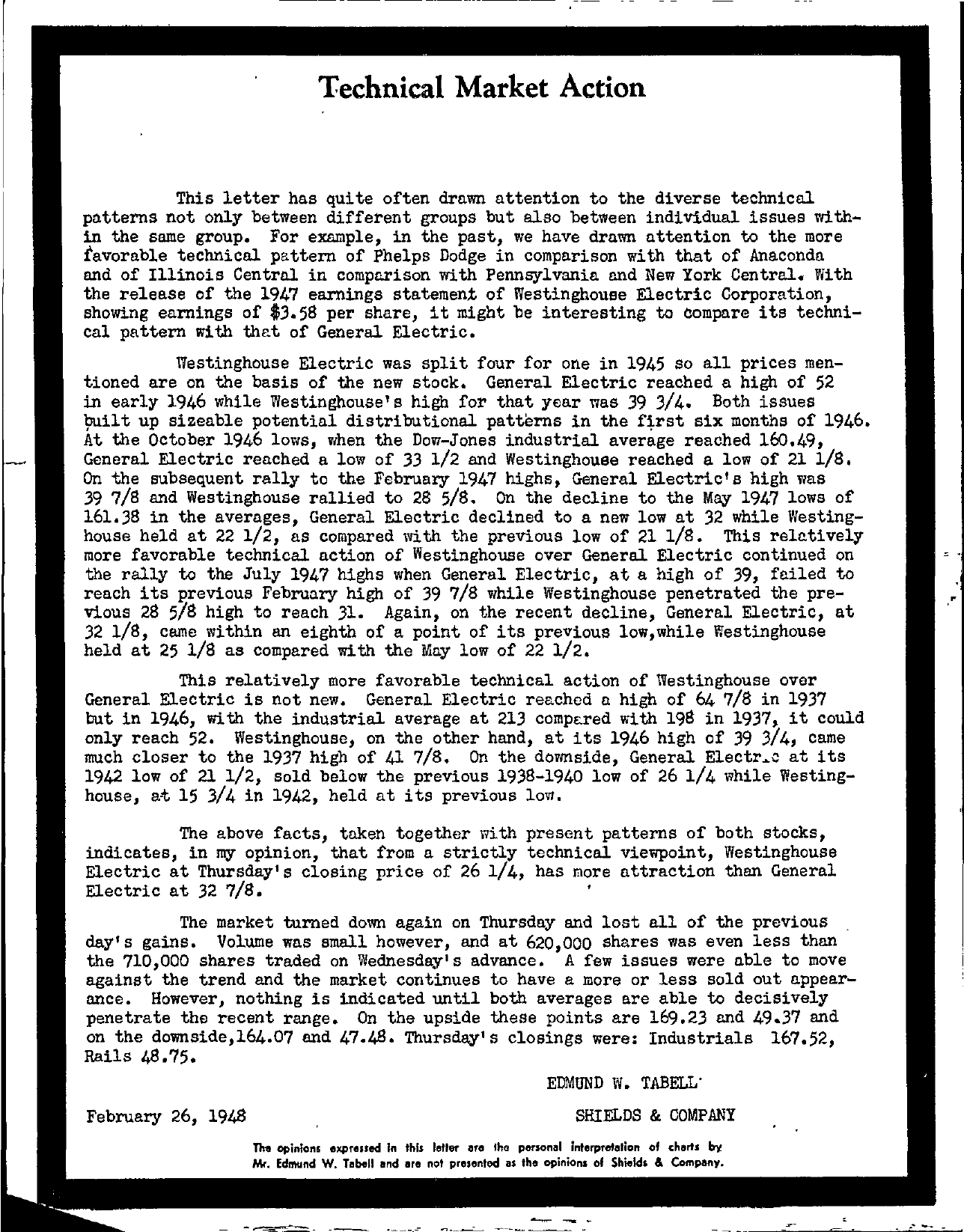 Technical Market Action This letter has quite often drawn attention to the diverse technical patterns not only between different groups but also between individual issues within the same group. For example, in the past, we have drawn attention to the more favorable technical pattern of Phelps Dodge in comparison with that of Anaconda and of Illinois Central in comparison with Pennsylvania and New York Central. With the release of the 1947 earnings statement of Westinghouse Electric Corporation, showing earnings of 3.58 per share, it might be interesting to compare its technical pattern with that of General Electric. Westinghouse Electric was split four for one in 1945 so all prices mentioned are on the basis of the new stock. General Electric reached a high of 52 in early 1946 while Westinghouse's high for that year was 39 3/4. Both issues 9uilt up sizeable potential distributional patterns in the frst six months of 1946. At the October 1946 lows, when the DOVi-Jones industrial average reached 160.49, General Electric reached a low of 33 1/2 and Westinghouse reached a low of 21 1/8. On the subsequent rally to the February 1947 highs, General Electric's high was 39 7/8 and Westinghouse rallied to 28 5/8. On the decline to the May 1947 lows of 161.38 in the averages, General Electric declined to a new low at 32 while Westinghouse held at 22 1/2, as compared with the previous low of 21 1/8. This relatively more favorable technical action of Westinghouse over General Electric continued on the rally to the July 1947 highs when General Electric, at a high of 39, failed to reach its previous February high of 39 7/8 while Westinghouse penetrated the previous 28 518 high to reach 31. Again, on the recent decline, General ElectriC, at 32 1/8, came within an eighth of a point of its previous low,while Westinghouse held at 25 1/8 as compared with the May low of 22 1/2. This relatively more favorable technical action of Westinghouse over General Electric is not new. General Electric reached a high of 64 7/8 in 1937 but in 1946, with the industrial average at 213 compared with 198 in 1937, it could only reach 52. Westinghouse, on the other hand, at its 1946 high of 39 3/4, came much closer to the 1937 high of 41 7/8. On the downSide, General Electrc at its 1942 low of 21 1/2, sold below the previous 1938-1940 low of 26 1/4 while Westinghouse, a 15 3/4 in 1942, held at its previous 10Vi. The above facts, taken together with present patterns of both stocks, indicates, in opinion, that from a strictly technical viewpoint, Westinghouse Electric at Thursday's closing price of 26 1/4, has more attraction than General Electric at 32 7/8. The market turned down again on Thursday and lost all of the previous day's gains. Volume was small however, and at 620,000 shares was even less than the 710,000 shares traded on Wednesday's advance. A few issues were able to move against the trend and the market continues to have a more or less sold out appearance. However, nothing is indicated until both averages are able to decisively penetrate the recent range. On the upside these points are 169.23 and 49.37 and on the downside,164.07 and 47.48. Thursday's closings were Industrials 167.52, Rails 48.75. EDMUND W. TABELL February 26, 1948 SHIELDS & COMPANY The opinions oxPrOJied In thb leiter aro Iha personal interpretation of cherts by Mr. Edn'lt.lnd W. Tllbell and IIro not presented as the opinions of Shield, & Company. – —