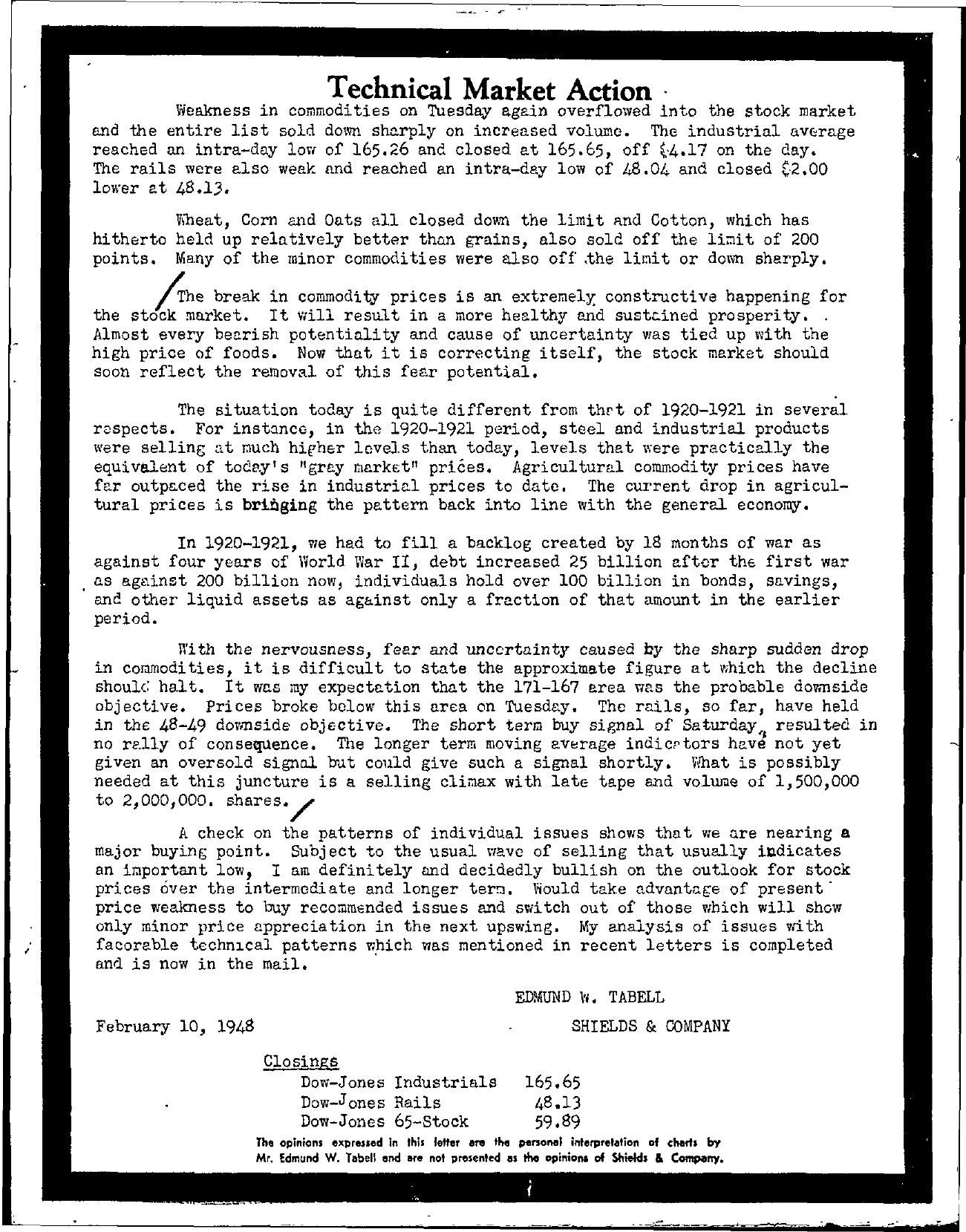 Technical Market Action . Weakness in commodities on Tuesday again overflowed into the stock market and the entire list sold down shurply on increased volume. The industrial avrage reached an intra-day low of 165.26 and closed at 165.65, off t4.17 on the day. The rails were also weak and reached an intra-day low of 48.04 and closed C-2..00 lower at 48.1). beat, Corn ru1d Oats all closed down the limit nd Cotton, which has I.hitherto held up relatively better than grains, also sold off the liit of 200 points. any of the minor commodities were also off ,the lilJit or down sharply. he break in commodit,y prices is an extremely' constructive happening for the stock market. It l'Iill result in a more healthy and sust.ined prosperity. . Almost every beurish potentiality and cause of uncertainty was tied up with the high price of foods. Now that it is correcting itself, the stock market should soon reflect the removal of this fear potential. The situation today is quite different from thrt of 1920-1921 in several r8spects. For inst3nce, in the 1920-1921 period, steel and industrial products \ere selling at ouch hifher loveJ.s than today, levels that were practically the equival,mt of tod.y' s gray markEt prices. Agricultural commodity prices have far outpaced the rise in industrial prices to date. The current drop in agricultural prices is briilging the pattern back into line with the general economy. In 1920-1921, we had to fill a backlog created by 18 months of war as against four years of World War II, debt increased 25 billion after the first war as against 200 billion now, indiViduals hold over 100 billion in bonds, savings, and other liquid assets as ag&inst only a fraction of that amount in the earlier period. With the nervousness, fear and uncertainty caused by the sharp sudden drop in cor.unodi ties, it is difficult to state the approximate figure at which the decline shaule halt. It was my expectation that the 171-167 area was the probable downside objective. Prices broke below this area on Tuesday. The rails, so far, have held in the 48-49 donside objective. The short term buy signal of Saturday, resulted in no re.lly of consequence. The longer term moving avrage indicptors hav' not yet given an oversold signal but could give such a signal shortly. bat is possibly needed at this juncture is a selling cliax with late tape and volume of 1,500,000 to 2,000,000. Shar6s. A check on the patterns of individual issues shows that vie ure nearing B major buyint; point. Subj ect to the usual rlavc of selling that usually indicates an important low, I am definitely ond decidedly bullish on the outlook for stock prices over the intermediate and longer ter!l. Viould take advantag' of present' price weakness to buy recommended issues and switch out of those whieh will show only minor price apprecia tior! in the next upswing. My analysis of issues with faeorable techncal patterns which was oentioned in recent letters is completed and is now in the mail. . February 10, 1948 EDMUND Vi. TABELL SHIELDS & COMPANY Closings Dow-Jones Industrials 165.65 Dow-Jones Rails Dow-Jones 65-Stock 48.13 59.89 The oJlinions expres.d In this letter are the penonel interpretation of cherts by Mr. Edmund W. Tabel! end &fa not presented as tho opiniON of Shields Company .—- — .