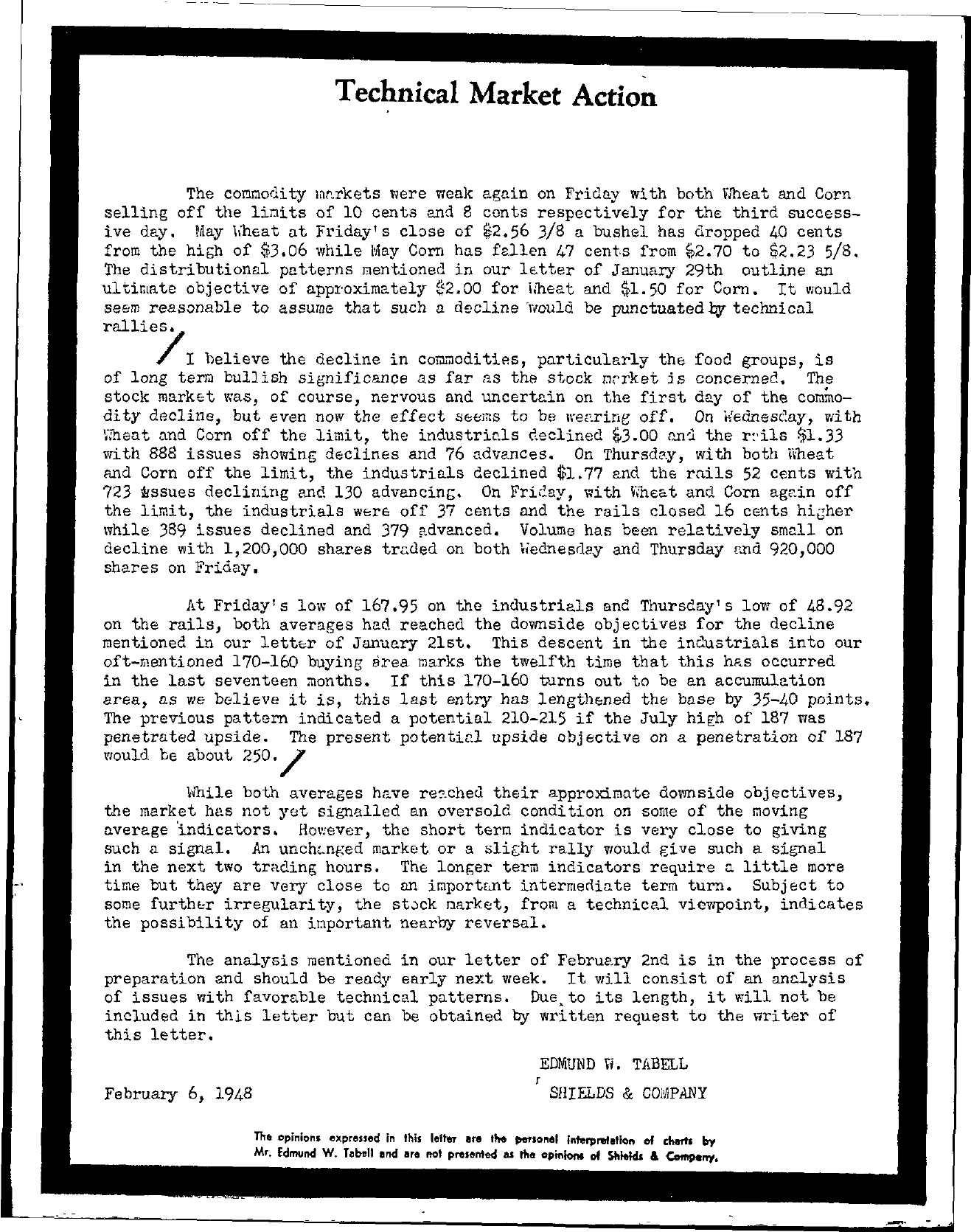 Technical Market Actio The cOlmodi ty mrcrkets were Vleak again on Friday with both Vlheat and Corn selling off the linits of 10 cents and 8 cents respectively for the third success- ive day. May 'iheat at Friday's close of 2.56 3/8 a bushel has dropped 40 cents from the high of 3.06 while May Corn has fz11en 47 cent.s from (;2.70 to 2.23 5/8. The distributionBl patterns mentioned in our letter of January 29th outline an ultimate objective of approximately 2.00 for Hheat and 1.50 for Corn. It would seem reasonable to assume that such a decline 'would be punctuated by technical I cooditis,rallies. believe the decline in particularly the food groups, is of long term bullish significance as far as the stock rrket js concerne. The stock market was, of course, nervous and uncertain on the first day of the cOrUno- di ty decline, but even now the effect s,ms to be 1I'el',rine off. On l!ednescay, with riheat and Corn off the limit, the industrials declined 3.00 QIl1 the r'ils 1.33 wi th 888 issues showing declines and 76 adve,nces. On Thursde,y, with both l'1'heat and Corn off the limit, the industrials declined 1.77 and the rails 52 cents with 723 liIssues declining and 130 advancing. On Friday, with \'ihe;at and Corn agdn off the limit, the industrials were off 37 cents and the rails closed 16 cents hiGher while 389 issues declined and 379 c,dvanced. Volume has been relatively smell on decline with 1,200,000 shares trGcled on both liednesclay and Thursday p.nd 920,000 shares on Friday. At Friday's low of 167.95 on the industrials and Thursday's low of 48.92 on the rails, both averages had reached the downside objectives for the decline mentioned in our letter of January 21st. This descent in the inGustrials into our oft-mentioned 170-160 buying area marks the twelfth time that this hp.s occurred in the last seventeen months. If this 170-160 turns out to be an accumulation area, as Vie believe it is, this last entry has length&ned the base by 35-40 points. The previous pattern indicated a potential 210-215 if the July hih of 187 was penetrated upside. The present po ten tiel upside objective on a penetration of 187 Vlould be about 250./ ),'hile both averages have ree.cheu their approximate downside objectives, the market has not yet signalled an oversold condition on some of the moving average 'indicators. However, the short term indicator is very close to giving such a signal. An unch.nged market or a sliGht rally vlOuld give such a signal in the next two trading hours. The longer term indicators require a little more time but they are very close to no imporknt intermediate term turn. Subject to some furthr irregularity, the stck narkt, from a technical vievoint, indicates the possibility of an inportant nearby reversal. The analysis mentioned in our letter of Februry 2nd is in the process of preparation and should be ready early next week. It will consist of an nndysis of issues with favorable technical patterns. Due. to its length, it will not be inCluded in thls letter but can be obtained by written request to the I1ri ter of this letter. EDMUND Ii. TABELL February 6, 1948 SHIELDS & COMPANY The opinions expressed in this lelt'eT ere Ilte pet.onel Interpl'fJlelion of chart. by Mr. Edmund W. Tlibell end are no' presented as the opmionl of Shlekb & Company.