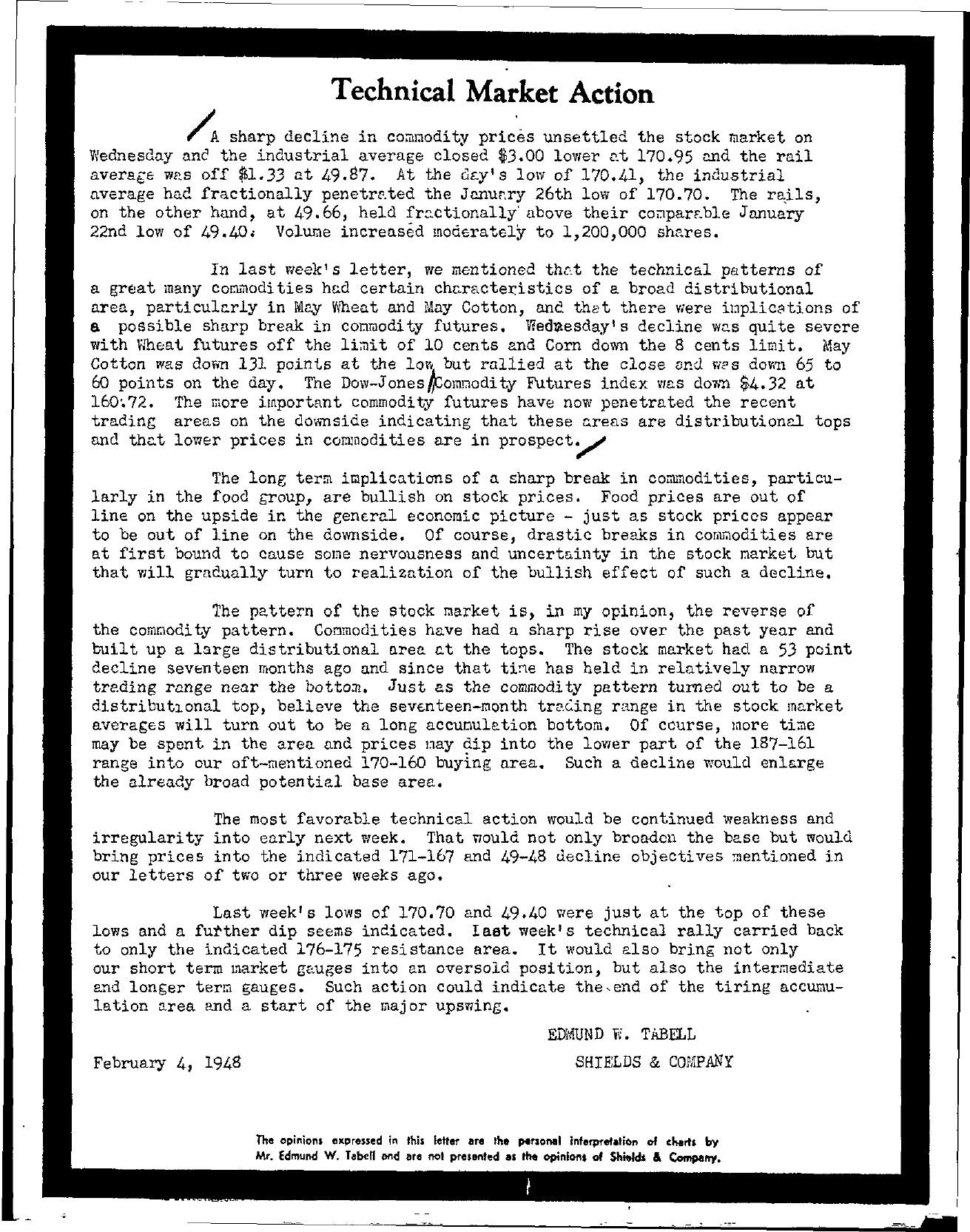 Technical Market Action cooditysharp decline in prices unsettled the stock market on Wednesday ane the industrial average closed 3.00 lower 't 170.95 nnd the rail averac was off l. 33 at 49.';37. At the Qr-y's low of 170.41, the industrial average had fractionally penetre.ted the Janur,ry 26th low of 170.70. The ra,ils, on the other hand, at 49.66, held frctionally' above their coparr.ble January 22nd low of 49.40, Volutle increased moderately to 1,200,000 shr.res. In last week's letter, we mentioned thr-t the technical patterns of a grElat many cOr.lmodities had certain characteristics of a brod distributional are, particulrly in M Wheat and May Cotton, nnd thet there Viere ilJplictions of a possible sharp break in conmodity futures. Wedesday's decline was quite severe with heat futures off the lii t of 10 cents no Corn down the 8 cents limit. illay Cotton was donn 131 points at the 10vA..,but rallied at the close Dnd Vies dorm 65 to 60 points on the day. The Dow-Jones'f-'0mr.lOdity Futures indEX ViaS down 4.32 at 160'.72. The !lore importRnt commodity futures have now penetrated the recent trading areas on the donside indicating that these areas are distribution tops and that lower prices in conodities are in prospect The long term implications of a sharp break in commodities, particularly in the food group, are bullish on stock prices. Food prices are out of line on the upside in the genEral economic picture – just as stock prices appear to be out of line on the downside. Of course, drastic breaks in cOfiodities are at first bound to cause some nervousness and uncertainty in the stock market but that will gradually turn to realiZation of the bullish effect of such a decline. The pattern of the stock market is, in my opinion, the reverse of the commodity pattern. COr.lmodities have had a sharp rise over the past year and built up a large distributional area ct the tops. The stock market had a 53 point decline sev8nteen months ago and since that tie has held in relatively narrow treding range near the bottom. Just as the commodity pattern turned out to be a distributonal top, believe the seve.nteen-month tre.Cing range in the stock market averages will turn out to be a long accur.lulation bottom. Of course, more time may be spent in the area and prices nay dip into the lower part of the 187-161 range into our oft-mentioned 170-160 buying area. Such a decline would enlarge the already broad potential base area. The most favorable technical action would be continued weakness and irregulari ty into early next week. That vlOuld not only broaden the base but would bring prices into the indicated 171-167 and 49-48 decline objectives mentioned in our letters of two or three weeks ago. Last week's lows of 170.70 and 49.40 were just at the top of these 10Vis and a futther dip seems inc.icated. last week's technical rally carried back to only the indicated 176-175 reSistance area. It would lso bring not only our short term Inarket gauges into an oversold position, but also the intermediate d longer term gauges. Such action could indicate the,end of the tiring accumu- lation area and a start of the maj or upswing. EDMUND Ii. TABELL February 4, 1948 SHIELDS & COMPANY The opinions expressed in this letter are Ihe personal interpret.tion of charts by Mr. Edmund W. Tallell and are not presented as the opinions of Sht.lds & Company. ;p