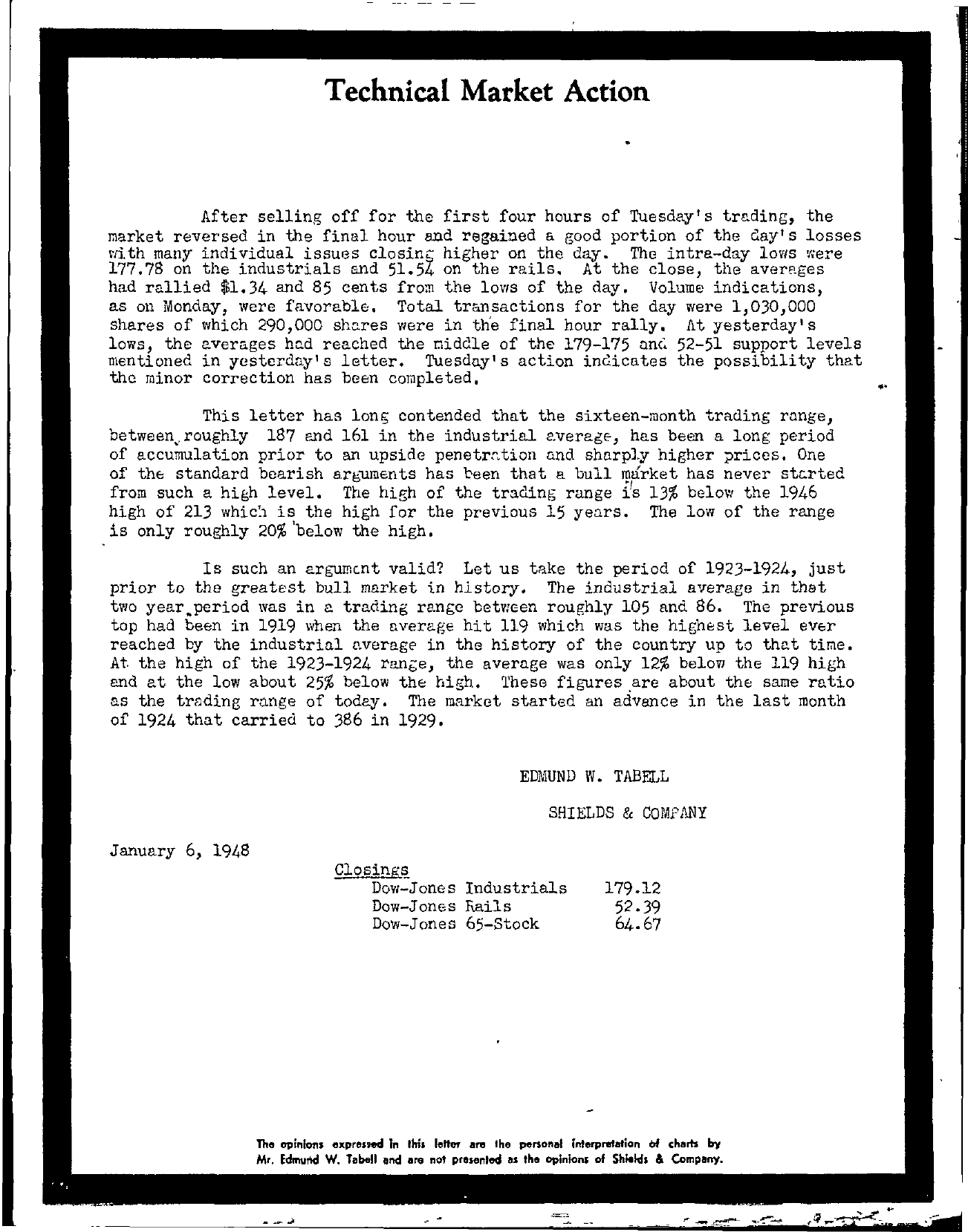 Technical Market Action After selling off for the first four hours of Tuesde's trading, the market reversed in the final hour and regained a good portion of the Gay's losses with many individual issues closin;;; higher on the day. The intra-day 10Vis v.ere 177.7B on the industrials and 51.54 on the rails. At the close, the avere,ges had rallied 1.34 and 85 cents from the lovls of the day. Volume indications, as Oil Monday, were favorable. Total transactions for the day were 1,030,000 shares of which 290,000 shc.res were in th'e final hour rally. At yesterday's lows, the averages ho.d reached the middle of the 179-175 nne 52-51 support levels mentioned in yesterday's 18tt8r. Tuesday's action inGicates the possibility that the minor correction has been completed. .' This letter has lon contended that the sixteen-month trading range, between., roughly 187 and 161 in the industrie 2,vera;;e, has been a long period of accumulation prior to an upside penetrtion and sharply higher prices. One of the standard bearish ar5cooents has been that a bull mtirket has never strted from such a hi;h level. The high of the trading runge ils 13 below the 1946 high of 213 whic1 is the high for the previous 15 years. The low of the range is only roughly 20 'below the high. Is such an argument valid Let us talce the period of 1923-1924, just prior to the greatest bull market in hIstory. The industrial average in that two year .period was in a trading range betvlGen roughly 105 and 86. The previous top had been in 1919 when the average hit 119 which was the highest level ever reached by the industrial nverage in the history of the country up to that time. At. the high of the 1923-1924 ran;;e, the average was only 12 belovi the 119 high end at the low about 25 below the high. These figures are about the same ratio as the trnding runge of today. The market started an advance in the last month of 1924 that carried to 386 in 1929. Ja.'1.uary 6, 1948 EDMUND IV. TABELL SHIELDS & COMPANY Closingl! Dow-Jones Industrials Dow-J one s f.ails DOW-Jones 65-Stock 179.12 52.39 64.67 The opinions expressed 'n lhis leHer are the personal interpretation of charts by Mr. Edmund W. lebell end are not presented as the opinions of ShJekfs &. Company.