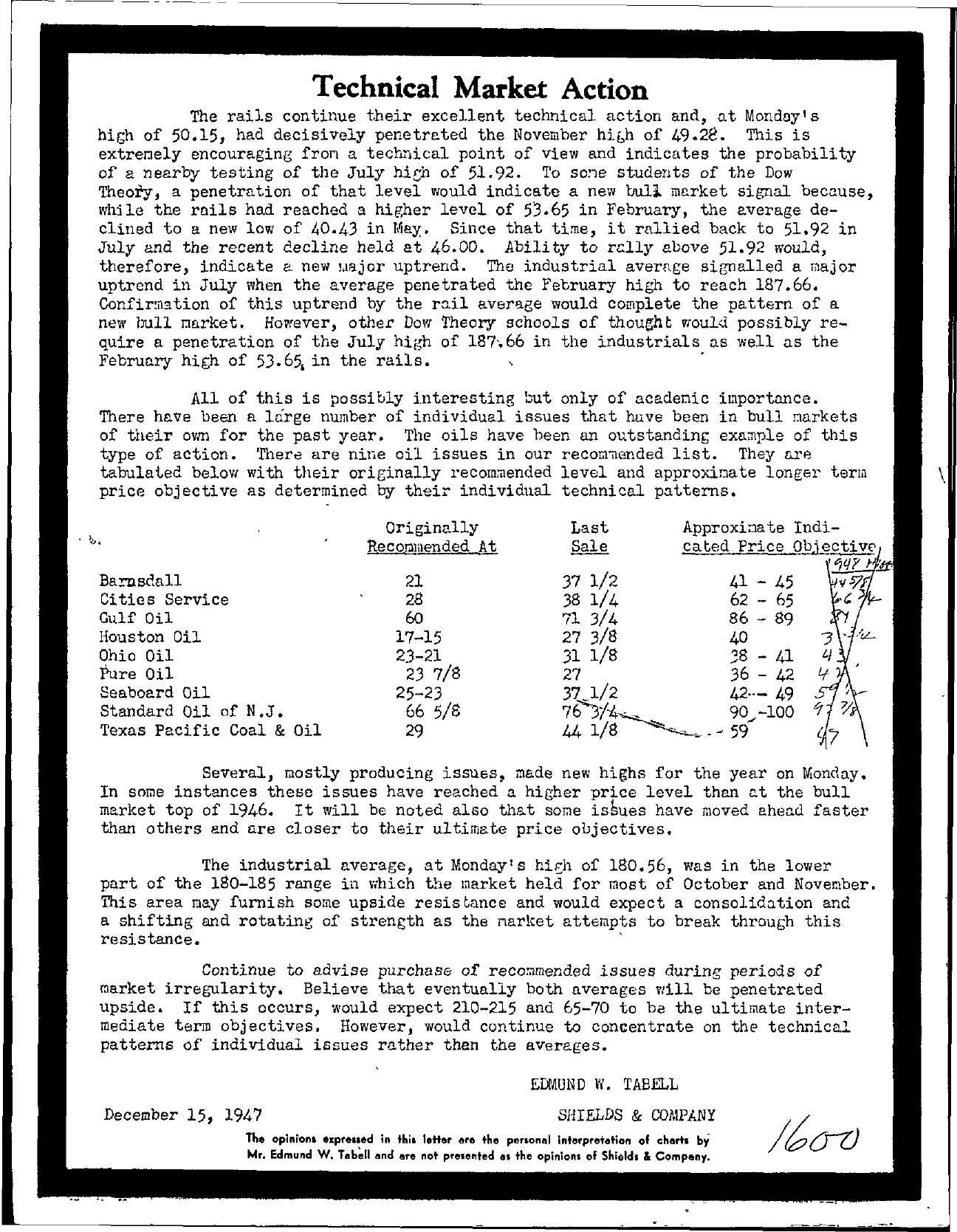 Technical Market Action The rails continue t.heir excellent technical action and, at Monday's hibh of 50.15, had decisively penetrated the November hibh of 49.28. This is extrenely encouraging fron 0. tecr4lical point of view and indicates the probability of a nearby testing of the July hieh of 51.92. To SO1e students of the Dow Theory, a penetration of that level would indicate a new bull market signal because, whlle the rnils had reached a higher level of 53.65 in February, the average declined to a new low of 40.43 in May. Since that time, it rallied back to 51. 92 in July and the recent decline held at 46.00. Ability to relly above 51.92 would, therefore, indicate e new r.lajor uptrend. The industrial average Signalled a major uptrend in July when the average penetrated the February high to reach 187.66. Confir!astion of this uptrend by the rail average would complete the patte;rn of a new bull narket. However, other Dol'I Theory schools of thought vloulJ possibly require a penetration of the July high of 187.66 in the industrials as well as the February high of 5J.6 in the rails. All of this is possibly interesting but only of acadenic importo.nce. There have been a large number of individual issues that huve been in bull narkets of their ovm for the past year. The oils have been an outstandin,; example of this type of action. Ther are nil.e oil issues in our recomended list. They are tabulated below with their originally recom;aended level and approxinate longer tenil price objective as determined by their individual technical patterns. Originally Last . . Recommended At Sale Ba!'llsdall Cities Service Gulf Oil Houston Oil Ohio Oil Pure Oil Seaboard Oil Standard Oil of N.J. Texas Pacific Coal & Oil 21 28 60 17-15 23-21 23 7/8 25-23 66 5/8 29 37 1/2 41 – 45 38 1/4 62 65 71 3/4 86 – 89 27 3/8 40 31 1/8 ;8 -41 27 36 – 42 37 1/2 42- 49 76J1-4 44 1/ 8 – – .. 9509– -100 Several, mostly producing issues, made new highs for the year on Monday. In some instances these issues have reached a higher price level than at the bull market top of 1946. It l'Iill be noted also that some isSues have moved ahead faster than others and are closer to their ultimate price objectives. The industrial average, at Monday's hi,h of 180.56, was in the lower part of the 180-185 range in which the market held for most of October and Nover.lber. This area may furnish some upside resisGance and would expect a consolidation and a shifting and rotatint; of strength as the narl,et attempts to break throubh this resistance. . Continue to advise purchase of reco;amended issues during periods of market irre5ularity. Believe that eventually both averages will be penetrated upside. If this occurs, would expect 210-215 and 65-70 to be the ultimate intermediate term objectives. However, Vlould continue to concentrate on the technical patterns of individual issues rather than the averages. EDMUND W. TABELL December 15, 1947 SHIELDS & COMPhNY byThe opinions exptened in hi, letter ere the penanal interpretation of chert. Mr. Edmund W. Tab1I end ere not presented as the opinions of Shields & Company. \