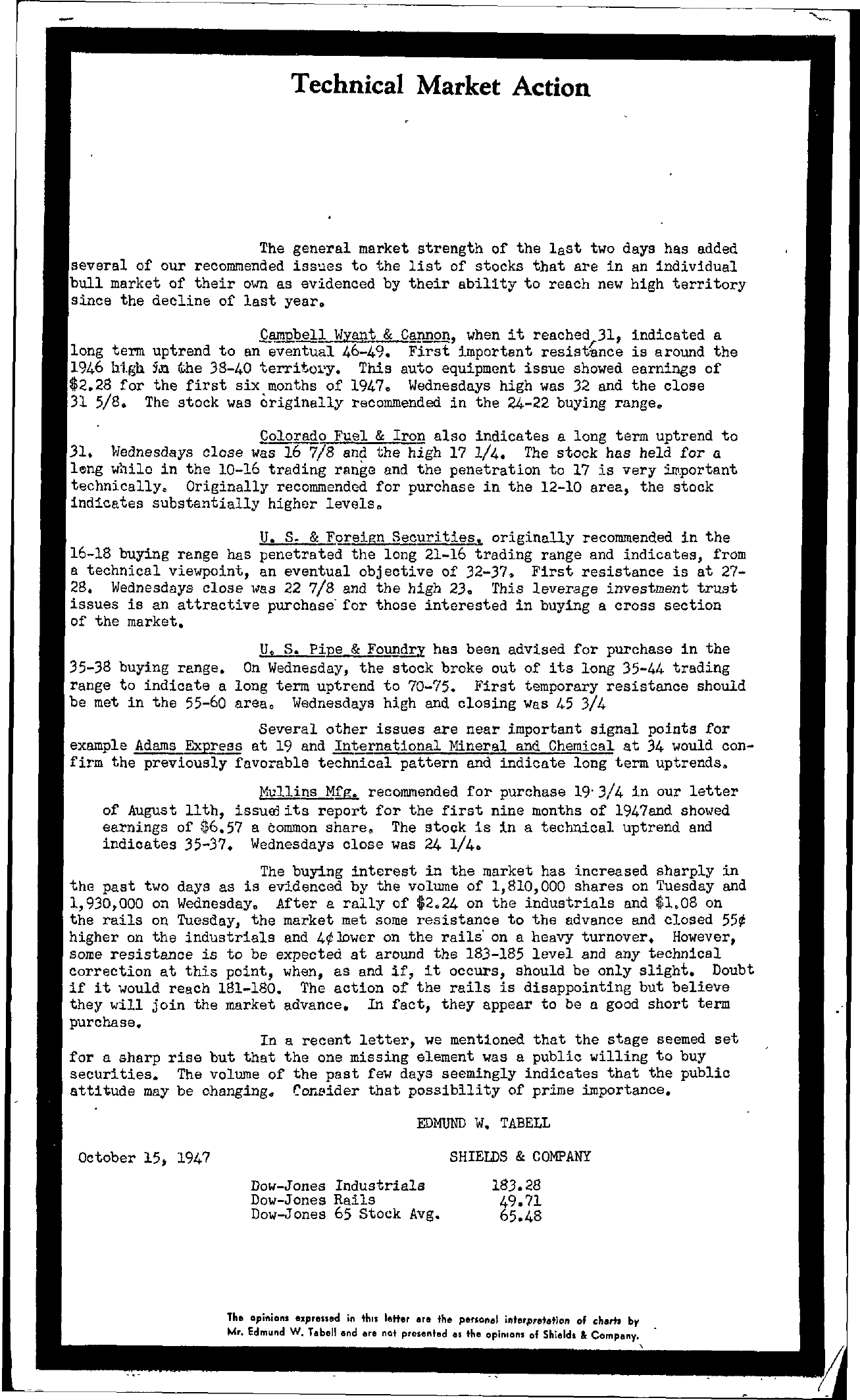 Technical Market Action The general market strength of the last two days has added several of our recommended issues to the list of stocks that are in an individual market of their own as evidenced by their ability to reach new high territory since the decline of last year. ,Q.bell Wyant & Canggn, when it reached 31, indicated a term uptrend to an eventual 46-49. First important resisnce is around the 11'I.gh ;ioll G;he 38-40 territOl'Y. This auto equipment issue showed earnings of 28 for the first six months of 1947. Wednesdays high was 32 and the close 31 5/8. The stock was originally recommended in the 24-22 buying range. Coloo Fuel & Iron also indicates a long term uptrend to Hednesdays close was 16 7/8 and the high 17 1/4. The stock has held for a whilo in the 10-16 trading range and the penetration to 17 is very important technically. Originally recommended for purchase in the 12-10 area, the stock indicates substantially highor levels. u. S. & F,oreign Securities, originally recommended in the 16-18 buying range has penetrated the long 21.16 trading range and indicates, from a technical viewpoint, an eventual objective of 32-37. First resistance is at 2728. Wednesdays close was 22 7/8 and the high 23. This leverage investment trust issues is an attractive purchase' for those interested in buying a cross section of the market. U, S. Pipe & Foundry has been advised for purchase in the 35-38 buying range. On Wednesday, the stock broke out of its long 35-44 trading range to indicate a long term uptrend to 70-75. First temporary resistance should be met in the 55-60 area, Wednesdays high and clOSing Was 45 3/4 Several other issues are near important signal points for example Adams Express at 19 and 1flnationa1 Mineral and Chemical at 34 would confirm the previously favorable technical pattern and indicate long term uptrends. ns recommended for purchase 19'3/4 in our letter of August 11th, issuooits report for the first nine months of 1947and showed earnings of 6.57 a common share. The stock is in a technical uptrend and indicates 35-37. Wednesdays close was 24 1/4. The buying interest in the market has increased sharply in the paat two days as is evidenced by the volume of 1,810,000 shares on Tuesday and 1,930,000 on Wednesday. After a rally of 2.24 on the industrials and 1,08 on the rails on Tuesday, the market met some resistance to the advance and closed 55 higher on the industrials and 4lower on the rails' on a heavy turnover. However, some resistance is to be expected at around the 183-185 level and any teChnical correction at this point, when, as and if, it occurs, should be only slight. Doubt if it would reach 181-180. The action of the rails is disappointing but believe they will join the market advance. In fact, they appear to be a good short term purchase. In a recent letter, we mentioned that the stage seemed set for a sharp rise but that the one missing element was a public willing to buy securities. The volume of the past few days seemingly indicates that the public may be changing. Conider that possibility of prime importance. EDMUND W. TABELL October 15, 1947 SHIELDS & COMPANY Dow-Jones Industrials Dow-Jones Rails Dow-Jones 65 Stock Avg. 183.28 49.71 65.48 The opinions expressed in thiS letter are the personal iterpretation of h4m by Mr. Edmund W. Tabell end fire nat presented as the opinions of Shield, & Company.