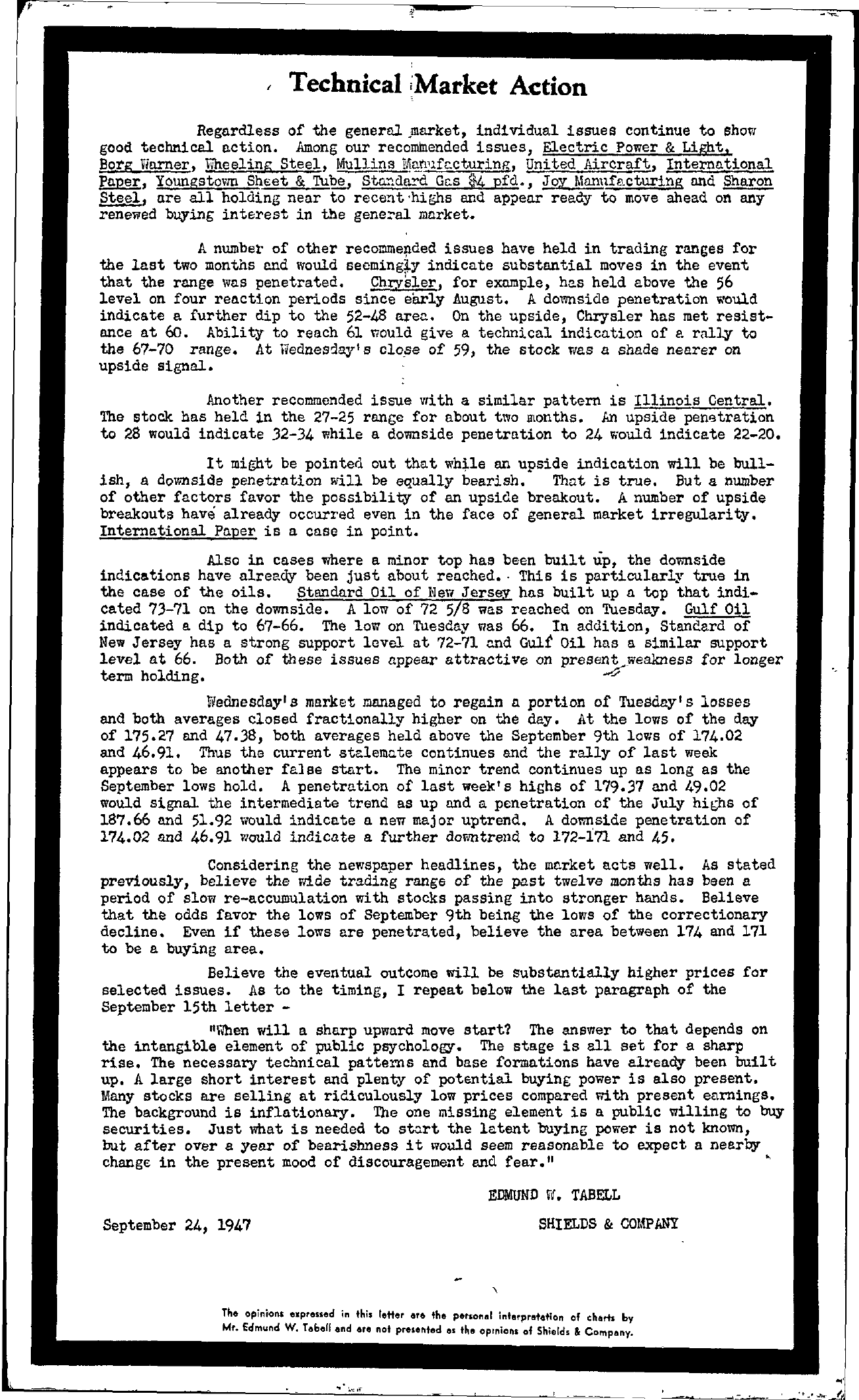 Technical Market Action Regnrdless of the general ,market, individual issues continue to show good technical action. Among our recommended issues, Electric Power & Light. Borg Vinrner, Wheeling Steel, Mullins Man11fc.cturing, United Aircraft, International Paper, Youngstovm Sheet & Tube, Sto..'lda!'d Gos 4 pfd., i!..9Y. Mannfa.cturing and Sharon Steel, are all holding near to recent-highs and appear ready to move ahead on any renewed buying interest in the general market. A number of other recommeded issues have held in trnding ranges for the last two months and 1V0uld seemingy indicate substantial moves in the event that the range was penetrated. Chrysler, for example, has held above the 56 level on four reaction periods since early August. A downside penetration would indicate a further dip to the 52-48 area. On the upside, Chrysler has met resistanCe at 60. Ability to reach 61 uould give a technical indication of a rally to the 67-70 range. At Wednesday's clofte of 59, the stock was a shade nearer on upside signal. Another recommended issue with a similar pattern is Illinois Central. The stoCk bas held in the 27-25 ranGe for about two months. An upside penetration to 28 would indicate 32-34 while a downside penetration to 24 would indicate 22-20. It might be pointed out that whle an upside indication will be bullish, a downside penetrntion will be equally bearish. That is true. But a number of other factors favor the possibilit,r of an upside breakout. A number of upSide breakouts have already occurred even in the face of general market irregularity. International Paper is a case in pOint. Also in cases where a minor top has been built up, the downside indic&tions have already been just about reached. – This is particularly true in the case of the oils. Standard Oil of New JerseY has built up a top that indi- cated 73-71 on the downside. A low of 72 5/8 was reached on Tuesday. Gulf Oil indicated a dip to 67-66. The low on Tuesday was 66. In addition, Standard of New Jersey has a strong support level at 72-71 nnd Gulf Oil has a similar support level at 66. Both of these issues appear attractive on present,weakness for longer term holding. ./ Flednesdnyl s market managed to regain a portion of Tuesday's losses and both averages closed fractionally higher on the day. At the lows of the day of 175.27 and 47.38, both averages held above the September 9th lows of 174.02 and 46.91. Thus the current stalemate continues and the rally of last week appears to be another false start. The minor trend continues up as long as the September lows hold. A penetration of last week's hiGhS of 179.37 and 49.02 would signal the intermediate trend as up nnd a penetration of the July hiQhs of 187.66 and 51.92 would indicate a new major uptrend. A downside penetration of 174.02 and 46.91 would indicate a further downtrend to 172-171 and 45. Considering the newspaper headlines, the market acts well. As stated previously, believe the wide trading range of the past twelve months has been a period of slow re-accumulation with stocks passing into stronger hands. Believe that the odds favor the lows of September 9th being the lows of the correctionary decline. Even if these lows are penetrated, believe the area between 174 and 171 to be a buying area. Believe the eventual outcome will be substantially higher prices for selected issues. As to the timing, I repeat below the last paragraph of the September 15th letter – \'l'hen will a sharp upward move start The answer to that depends on the intangible element of public psychology. The stage is all set for a sharp rise. The necessary technical patterns and base formations have already been built up. A large short interest and plent,r of potential buying power is also present. Many stocks are selling at ridiculously low prices compared with present earnings. The background is inflationary. '!he one miSSing element is e. public willing to buy securities. Just what is needed to start the latant buying power is not known, but after over a year of bearishness it would seem reasonable to expect a neerb,r change in the present mood of discouragement and fear. ' September 24, 1947 EDMUND Vi. TABELL SHIELDS & COMPANY , The opiniolU elpressed in this letter 6r6 the personal interpretation of chl/Jlrts by Mr. Edmund W. Tabel! and are not presented as the opInions of Shields & Company. '.,….- t.