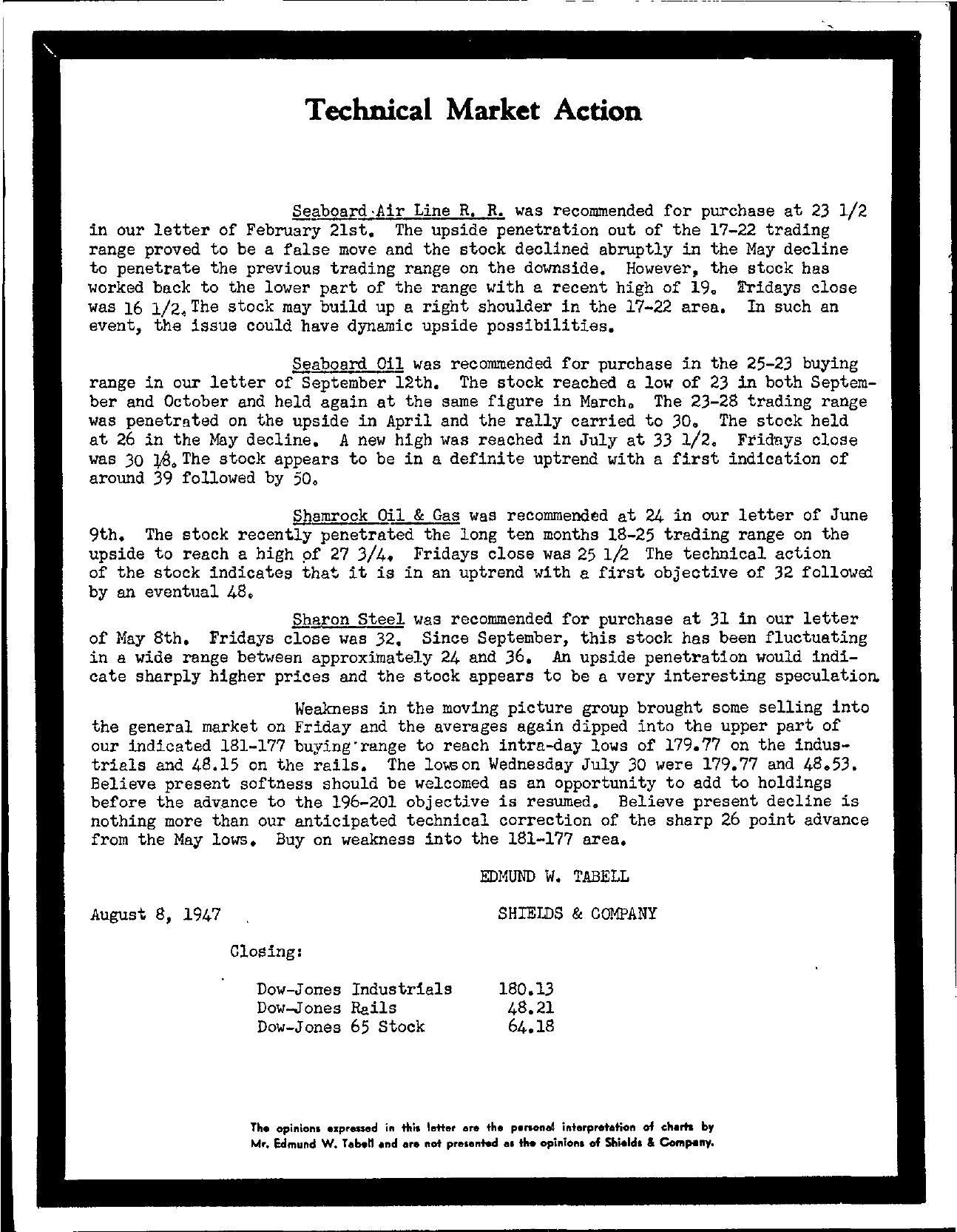 Technical Market Action Seaboard-Air Line R. R. was recommended for purchase at 23 1/2 in our letter of February 21st. The upside penetration out of the 17-22 trading range proved to be a false move and the stock declined abruptly in the May decline to penetrate the previous trading range on the downside. However, the stock has worked back to the lower part of the range with a recent high of 19. fridays close was 16 1/2. The stock may build up a right shoulder in the 17-22 area. In such an event, the issue could have dynamic upside possibilities. Seaboard Oil was recommended for purchase in the 25-23 buying range in our letter of September 12th. The stock reached a low of 23 in both September and October and held again at the same figure in March. The 23-28 trading range was penetrated on the upside in April and the rally carried to 30. The stock held at 26 in the May decline. A new high was reached in July at 33 1/2. Fridays close was 30 S. The stock appears to be in a definite uptrend with a first indication of around 39 followed by 50. Shamrock Oil & Gas waS recommended at 24 in our letter of June 9th. The stock recently penetrated the long ten months 18-25 trading range on the upside to reach a high pf 27 3/4. Fridays close was 25 1/2 The technical action of the stock indicates that it is in an uptrend with a first objective of 32 followed by an eventual 48. Sharon Steel was recommended for purchase at 31 in our letter of May 8th. Fridays close was 32. Since September, this stock has been fluctuating in a wide range between approximately 24 and 36. An upside penetration would indicate sharply higher prices and the stock appears to be a very interesting speculatio Weakness in the moving picture group brought some selling into the general market on Friday and the averages again dipped into the upper part of our indicated 181-177 buying'range to reach intra-day lows of 179.77 on the industrials and 48.15 on the rails. The lowson Wednesday July 30 were 179.77 and 48.53. Believe present softness should be welcomed as an opportunity to add to holdings before the advance to the 196-201 objective is resumed. Believe present decline is nothing more than our anticipated technical correction of the sharp 26 point advance from the May lows. Buy on weakness into the 181-177 area. EDHUND W. TABELL August 8, 1947 SHIELDS & COMPANY Closing Dow-Jones Industrials Dow-Jones Rails Dow-Jones 65 Stock 180.13 48.21 64.18 Th. opinions erpressed in this letter ere the p.nonal interpretation of ch.rta by Mr. Eclmund W. feb.n end .r. not pre.enhd 0lil1 the opinion. of Shitlld, & Compilny.