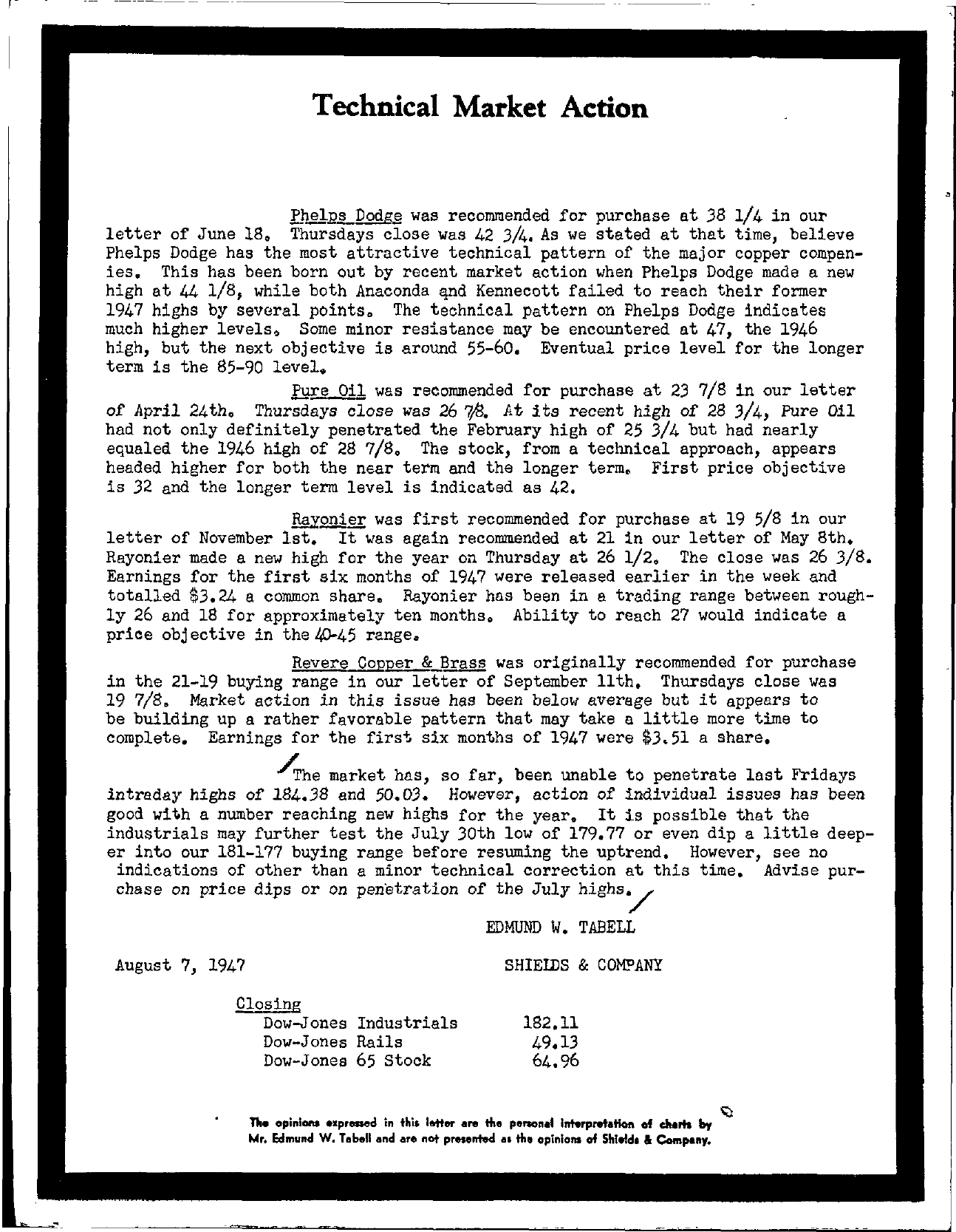 Technical Market Action fpelDodg was recommended for purchase at 38 1/4 in our letter of June 18. Thursdays close was 42 3/4. As we stated at that time, believe Phelps Dodge has the most attractive technical pattern of the major copper companies. This has been born out by recent market action when Phelps Dodge made a new high at 44 1/8, while both Anaconda nd Kennecott failed to reach their former 1947 highs by several points. The technical Pattern on Phelps Dodge indicates much higher levels. Some minor resistance may be encountered at 47, the 1946 high, but the next objective is around 55-60. Eventual price level for the longer term is the 85-90 level. Pure Oil was recommended for purchase at 23 7/8 in our letter of April 24th. Thursdays close was 267;8. At its recent high of 28 3/4, Pure Oil had not only definitely penetrated the February high of 25 3/4 but had nearly equaled the 1946 high of 28 7/8. The stock, from a technical approach, appears headed higher for both the near term and the longer term. First price objective is 32 and the longer term level is indicated as 42. Rayonier was first recommended for purchase at 19 5/8 in our letter of November 1st. It was again recommended at 21 in our letter of May 8th. Rayonier made a new high for the year on Thursday at 26 1/2. The close was 26 3/8. Earnings for the first six months of 1947 were released earlier in the week and totalled 3.24 a common share. Rayonier has been in a trading range between roughly 26 and 18 for approximately ten months. Ability to reach 27 would indicate a priee objective in the 1iJ-45 range. Revere Copper &Brass was originally recommended for purchase in the 21-19 buying range in our letter of September 11th. Thursdays close was 19 7/8. Market action in this issue has been below average but it appears to be building up a rather favorable pattern that may take a little more time to complete. Earnings for the first six months of 1947 were 3.51 a share. he market has, so far, been unable to penetrate last Fridays intraday highs of 184.38 and 50.03. However, action of individual issues has been good wih a number reaching new highs for the year. It is possible that the industrials may further test the July 30th low of 179.77 or even dip a little deeper into our 181-177 buying range before resuming the uptrend. However, see no indications of other than a minor technical correction at this time. Advise purchase on price dips or on penetration of the July highS EDMUND W. TABELL August 7, 1947 SHIELDS & COMANY Closing Dow-Jones Industrials Dow-Jones Rails Dow-Jones 65 Stock 182.11 49.13 64.96 \;) Th. opinlOftS expressed in this l6tter are the penonat Interpretation of ch.rts by Mr. Edmund W. Tabell and are not presented al the opinions of Sht.td. I Company.