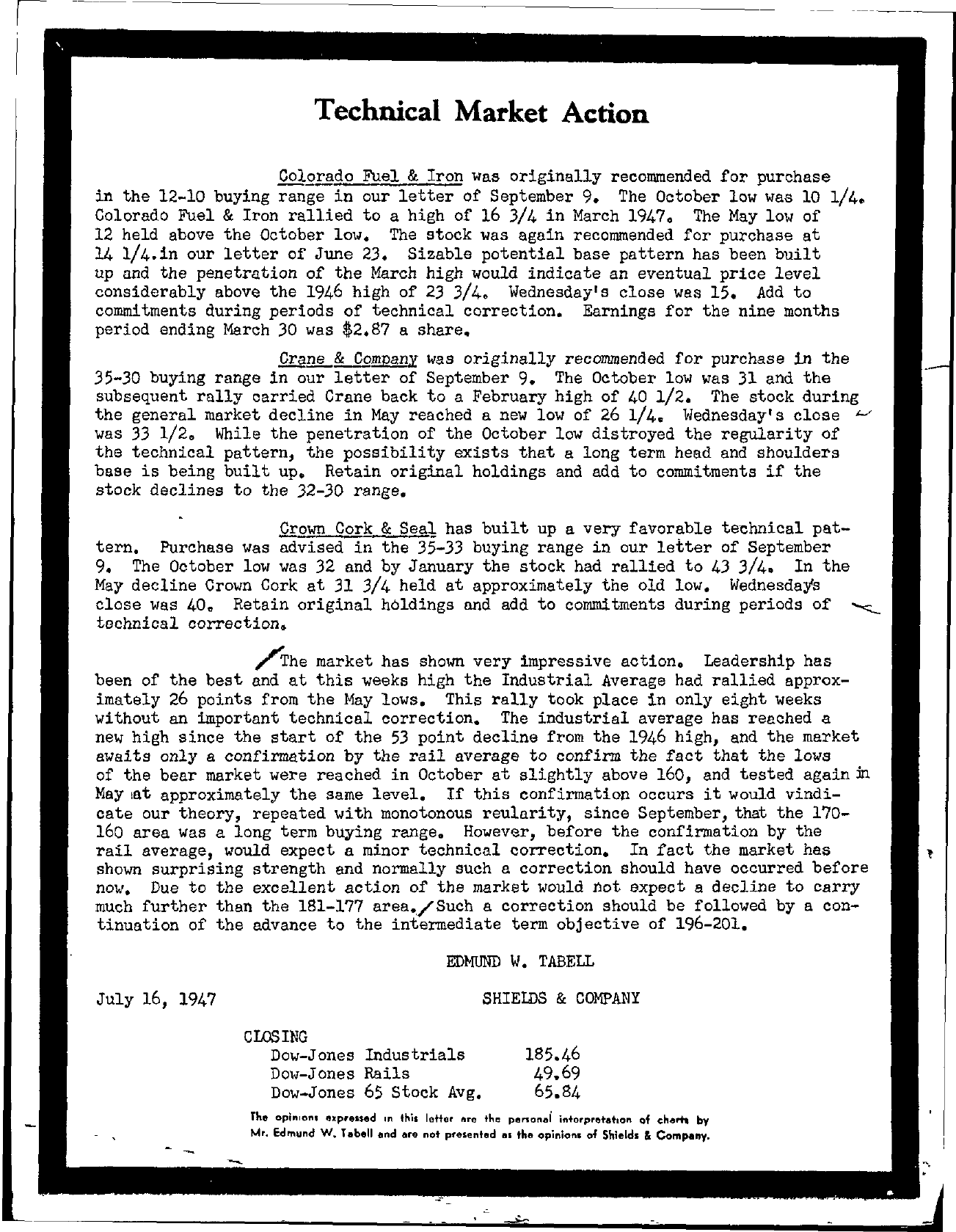 Technical Market Action Colorado Fuel & Iron was originally recommended for purchase in the 12-10 buying range in our letter of September 9. The October low was 10 1/4. Colorado Fuel & Iron rallied to a high of 16 3/4 in March 1947. The May low of 12 held above the October low. The stock was again recommended for purchase at 14 1/4.in our letter of June 23. Sizable potential base pattern has been built up and the penetration of the March high would indicate an eventual price level considerably above the 1946 high of 23 3/4. Wednesday's close was 15. Add to commitments during periods of technical correction. Earnings for the nine months period ending March 30 was 2.87 a share. Qr& Companx Was originally recommended for purchase in the 35-30 buying range in our letter of September 9. The October low was 31 and the subsequent rally carried Crane back to a February high of 40 1/2. The stock during the general market decline in May reached a new low of 26 1/4. Wednesday's close h/ was 33 1/2. While the penetration of the October low distroyed the regularity of the technical pattern, the possibility exists that a long term head and shoulders base is being built up. Retain original holdings and add to commitments if the stock declines to the 32-30 range. Crown Cork &Sea1 has built up a very favorable tehnical pat- tern. Purchase was advised in the 35-33 buying range in our letter of September 9. The October low was 32 and by January the stock had rallied to 43 3/4. In the May decline Crown Cork at 31 3/4 held at approximately the old low. Wednesdays close was 40. Retain original h61dings and add to commitments during periods of technical correction. he market has shown very impressive action. Leadership has been of the best and at this weeks high the Industrial Average had rallied approximately 26 points from the May lows. This rally took place in only eight weeks without an important technical correction. The industrial average has reached a new high since the start of the 53 point decline from the 1946 high, and the market awaits only a confirmation by the rail average to confirm the fact that the lows of the bear market were reached in October at slightly above 160, and tested againm May ,at approximately the same level. If this confirmation occurs it would vindicate our theory, repeated with monotonous reu1arity, since September, that the 170160 area was a long term buying range. However, before the confirmation by the rail average, would expect a minor technical correction. In fact the market has shown surprising strength and normally such a correction should have occurred before now. Due to the excellent action of the market would not expect a decline to carry much further than the 181-177 area./ Such a correction should be followed by a continuation of the advance to the intermediate term objective of 196-201. ED!UND W. TABELL July 16, 1947 SHIELDS & COMPANY CLOSING Dow-Jones Industrials Dow-Jones Rails Dow-Jones 65 Stock Avg. 185.46 49.69 65.84 The opinlo. 8wpressod In this letter IIro the personei intorpretatlon of ella,… by Mr. Edmund W. labell end are not presented as the opinions of Shields & Comp.lllny.