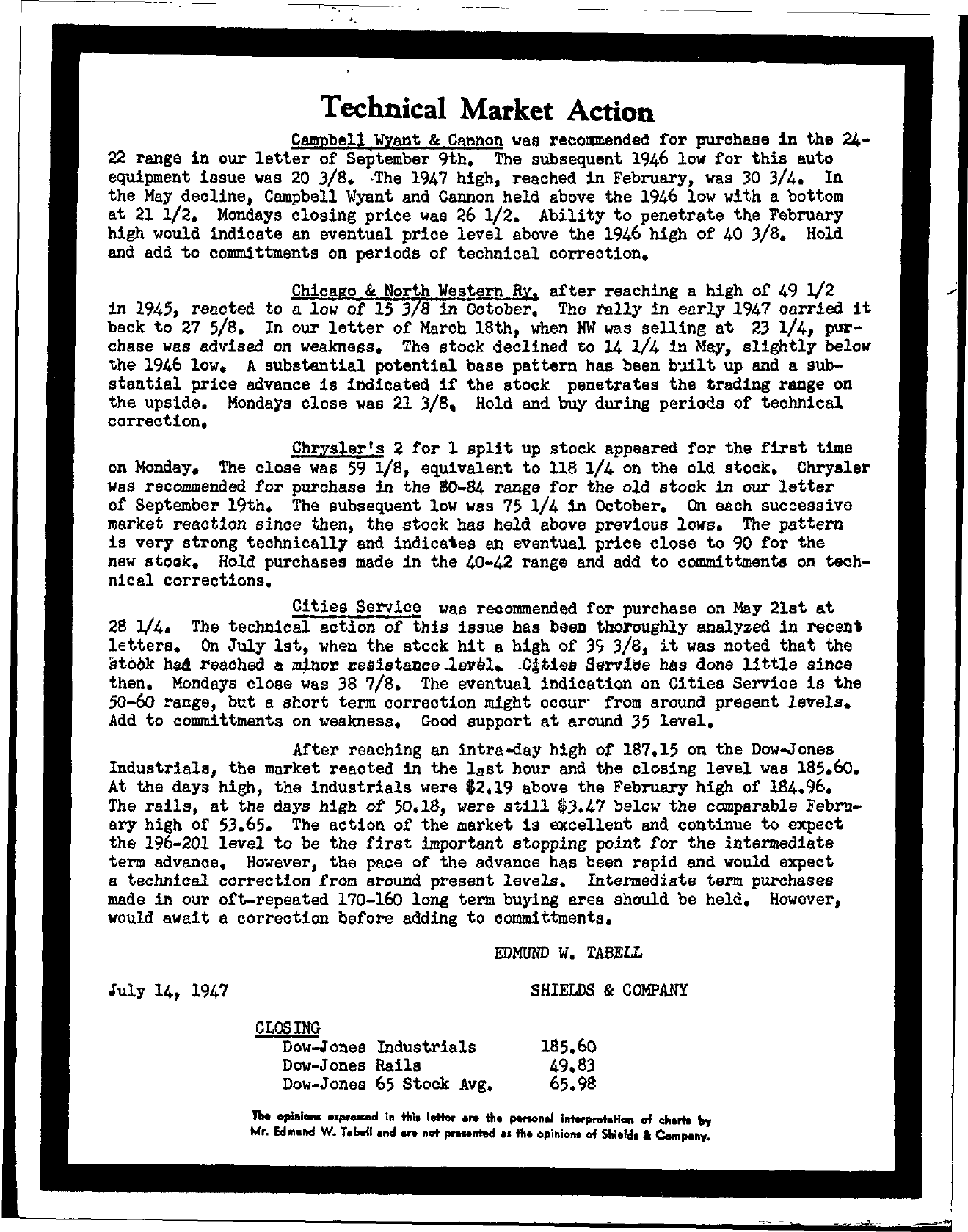 Technical Market Action Campbell WYant &Cannon was recommended for purchase 1n the 24- 22 range in our letter of September 9th. The subsequent 1946 low for this auto equipment issue was 20 3/8. -The 1947 high, reached in February, was 30 3/4. In the May decline, Campbell Wyant and Cannon held above the 1946 low with a bottom at 21 1/2. Mondays closing price was 26 1/2. Ability to penetrate the February high would indioate an eventual prioe level above the 1946 high of 40 3/8. Hold and add to committments on periods of technioa1 correotion. Chioago &North Western Ry. after reaohing a high of 49 1/2 in 1945, reacted to a low of 15 3/8 in October. The rally in early 1947 carried it back to 27 5/8. In our letter of March 18th, when NW was selling at 23 1/4, purchase was advised on weskness. The stook declined to l4 1/4 in May, slightly below the 1946 low. A substantial potential base pattern has been built up and a substsntial price advanoe is indioated if the stock penetrates the trading range on the upside. Mondays close was 21 3/8. Hold and buy during periods of technical oorreotion. Chrysler1s 2 for 1 split up stock appeared for the first time on Monday. The close was 59 1/8, equivalent to 118 1/4 on the old stock. Chrysler was recommended for purchase in the SO-S4 range for the old stock in our letter of September 19th. The subsequent low was 75 1/4 in October. On each suocessive market reaction since then, the stock has held above previous lows. The pattern is very strong technically and indica\es an eventual price close to 90 for the new stoQk. Hold purohases made in the 40-42 range and add to oommittments on technical corrections. Cities Service was recommended for purohase on May 21st at 28 1/4. The technioal action of this issue has beeD thoroughly analyzed in recen' letters. On July 1st, when the stook hit a high of 3S 3/8, it was noted that the stock bed reached a minor resistacelevel. CtieB Service h8s done little since then. Mondays olose was 38 7/8. The eventual-indioation on Cities Service is the 50-60 range, but a short term correotion might oocur- from around present levels. Add to committments on weakness. Good support at around 35 level. After reaching an intra-day high of 187.15 on the Dow-Jones Industrials, the market reacted in the last hour and the closing level was 185.60. At the days high, the industrials were 2,19 above the February high of 184.96. The rails, at the days high of 50.18, were still 3.47 below the comparable February high of 53.65. The action of the market is excellent and continue to expect the 196-201 level to be the first important stopping point for the intermediate term advanoe. However, the pace of the advance has been rapid and would expect a technical correction from around present levels. Intermediate term purohases made in our oft-repeated 170-160 long term buying area should be held. However, would await a correction before adding to committments. EDMUND W. TABELL J'uly 14, 1947 SHIELDS & COMPANY CLOSING Dow-Jones Industrials Dow-Jones Rails Dow-Jones 65 Stook Avg. 185.60 49.83 65.98 TIte ophdorw e.preaed in thls letter .,. the fMrsonai Interpretation of dI…. by Mr. Echl'lUM W. T,b.lI,nef …. not p…..nted I' the opinioM of Shield, Company.