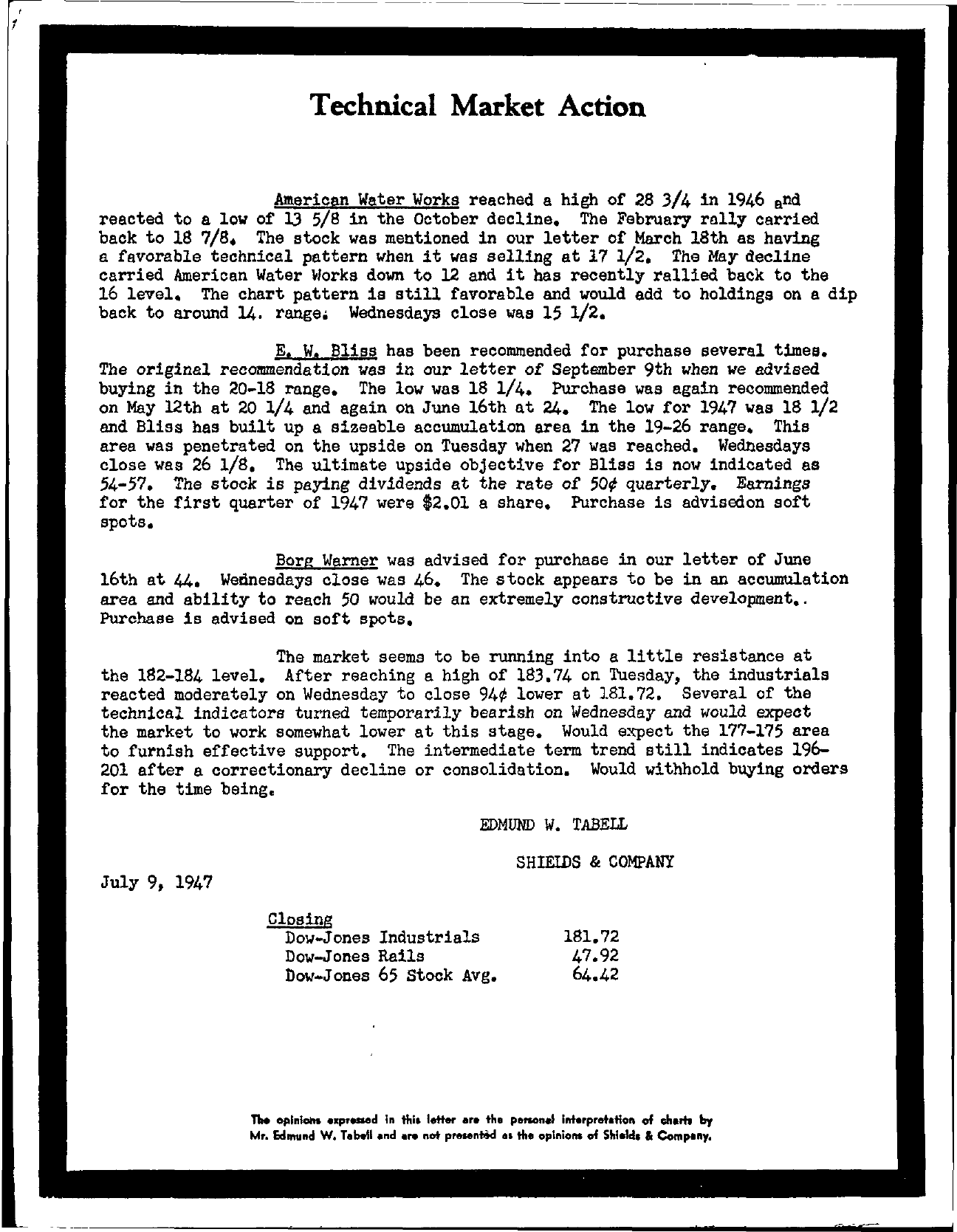 Technical Market Action American Water Works reached a high of 28 3/4 in 1946 and reacted to a low of 13 5/8 in the October decline. The February rally carried back to 18 7/8. The stock was mentioned in our letter of March 18th as having a favorable technical pattern when it was selling at 17 1/2. The May decline carried American Water Iorks down to 12 and it has recently rallied back to the 16 level. The chart pattern is still favorable and would add to holdings on a dip back to around 14. range. Wednesdays close was 15 1/2. E. W. Bliss has been recommended for purchase several times. The original recommendation was in our letter of September 9th when we advised buying in the 20-18 range. The low was 18 1/4. Purchase was again recommended on May 12th at 20 1/4 and again on June 16th at 24. The low for 1947 was 18 1/2 and Bliss has built up a sizeable accumulation area in the 19-26 range. This area was penetrated on the upside on Tuesday when 27 was reached. Wednesdays close was 26 1/8. The ultimate upside objective for Bliss is now indicated as 54-57. The stock is paying dividends at the rate of 50 quarterly. Earnings for the first quarter of 1947 were 2.01 a share. Purchase is advisedon soft spots. Borg Warner was advised for purchase in our letter of June 16th at 44. Wednesdays close was 46. The stock appears to be in an accumulation area and ability to reach 50 would be an extremely constructive development. Purchase is advised on soft spots. The market seems to be running into a little resistance at the 182-184 level. After reaching a high of 183.74 on Tuesday, the industrials reacted moderately on Wednesday to close 94 lower at 181.72. Several of the technical indicators turned temporarily bearish on Wednesday and would expect the market to work somewhat lower at this stage. Would expect the 177-175 area to furnish effective support. The intermediate term trend still indicates 196201 after a correctionary decline or consolidation. Would withhold buying orders for the time being. EDMUND W. TABELL July 9, 1947 SHIEIDS & COMPANY Closing Dow-Jones Industrials Dow-Jones Rails Dow-Jones 65 stock Avg. 181.72 47.92 64.42 The oplnloM expreaed In thla letter .,. the person Interpretation of chart. by a.Mr. edMUnd W. r.beU end …. not presenMd the opinions of Shields' Complny.