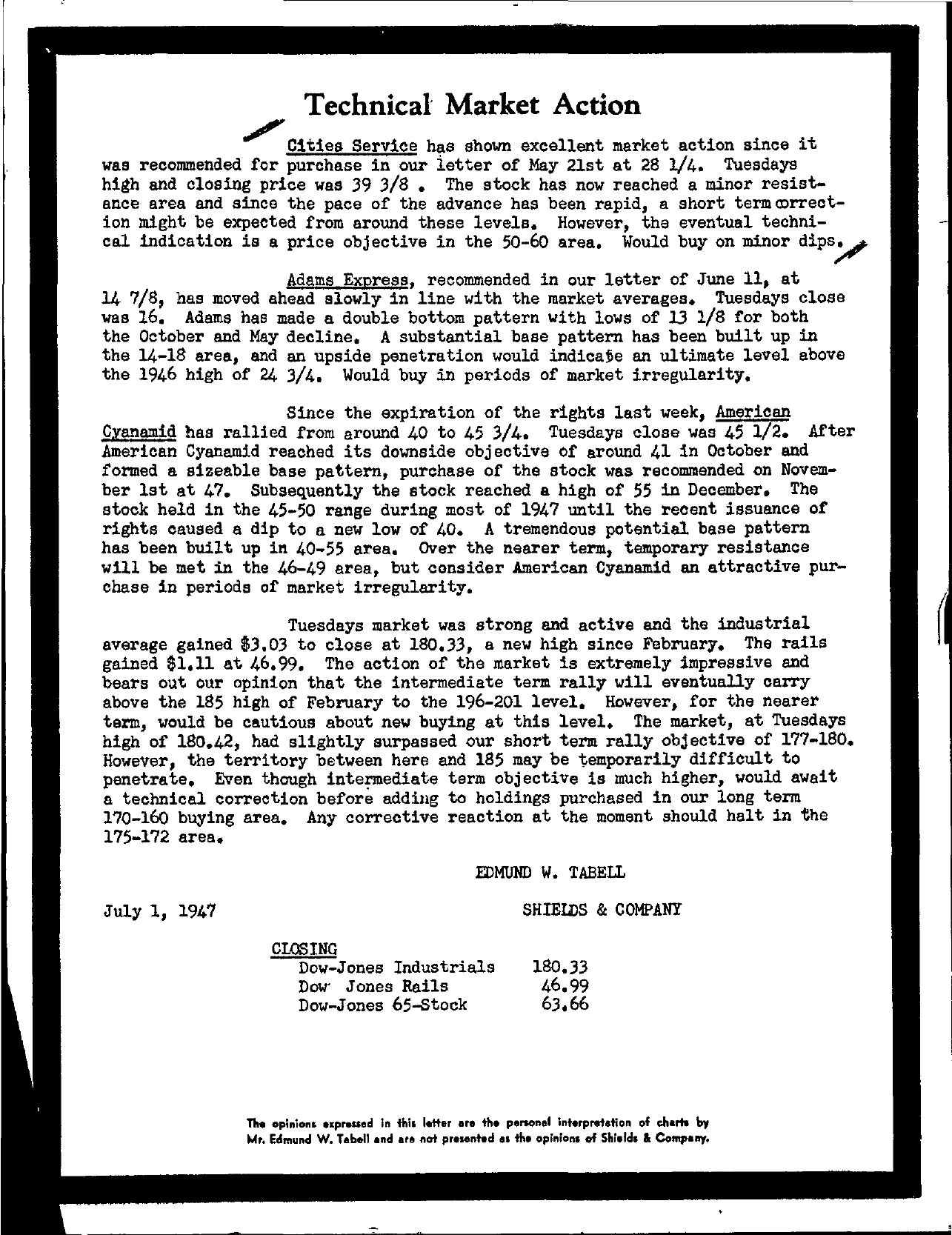 Technical Market Action Cltles Service has shown excellent market action since it was recommended for purchase in our ietter of May 21st at 28 1/4. Tuesdays high and closing price was 39 3/8. The stock has now reached a minor resistance area and since the pace of the advance has been rapid, a short termrorrection might be expected from around these levels. However, the eventual technical indication is a price objective in the 50-60 area. Would buy on minor diPS Adams Express, recommended in our letter of June 11, at 14 7/8, has moved ahead slowly in line with the market averages. Tuesdays close was 16. Adams has made a double bottom pattern with lows of 13 1/8 for both the October and May decline. A substantial base pattern has been built up in the 14-18 area, and an upside penetration would indicae an ultimate level above the 1946 high of 24 3/4. Would buy in periods of market irregularity. Since the expiration of the rights last week, American CYanamid has rallied from around 40 to 45 3/4. Tuesdays close was 45 1/2. After American Cyanamid reached its downside objective of around 41 in October and formed a sizeable base pattern, purchase of the stock was recommended on Novem- ber 1st st 47. Subsequently the stock reached a high of 55 in December. The stock held in the 45-50 range during most of 1947 until the recent issuance of rights caused a dip to a new low of 40. A tremendous potential base pattern has been built up in 40-55 area. Over the nearer term, temporary resistance will be met in the 46-49 area, but consider American Cyanamid an attractive pur- chase in periods of market irregularity. Tuesdays market was strong and active and the industrial average gained 3.03 to close at 180.33, a new high since February. The rails gained 1.11 at 46.99. The action of the market is extremely impressive and bears out our opinion that the intermediate term rally will eventually carry above the 185 high of February to the 196-201 level. HoWever, for the nearer term, would be cautious about new buying at this level. The market, at Tuesdays high of 180.42, had slightly surpassed our short term rally objective of 177-180. However, the territory between here and 185 may be temporarily difficult to penetrate. Even though intermediate term objective is much higher, would await a technical correction before adding to holdings purchased in our long term 170-160 buying area. Any corrective reaction at the moment should halt in the 175-172 area. EDMUND W. TABEIl. July I, 1947 SHIEWS & COMPANY CLOSING Dow-Jones Industrials Dow Jones Rails Dow-Jones 65-Stook 180.33 46.99 63.66 Th. opinions expressed 1n this letter are the personal interpretation of cham by Mr Edmund W. T.b.n and ere not presented 811 the opinions of Shi.ld, l Company.