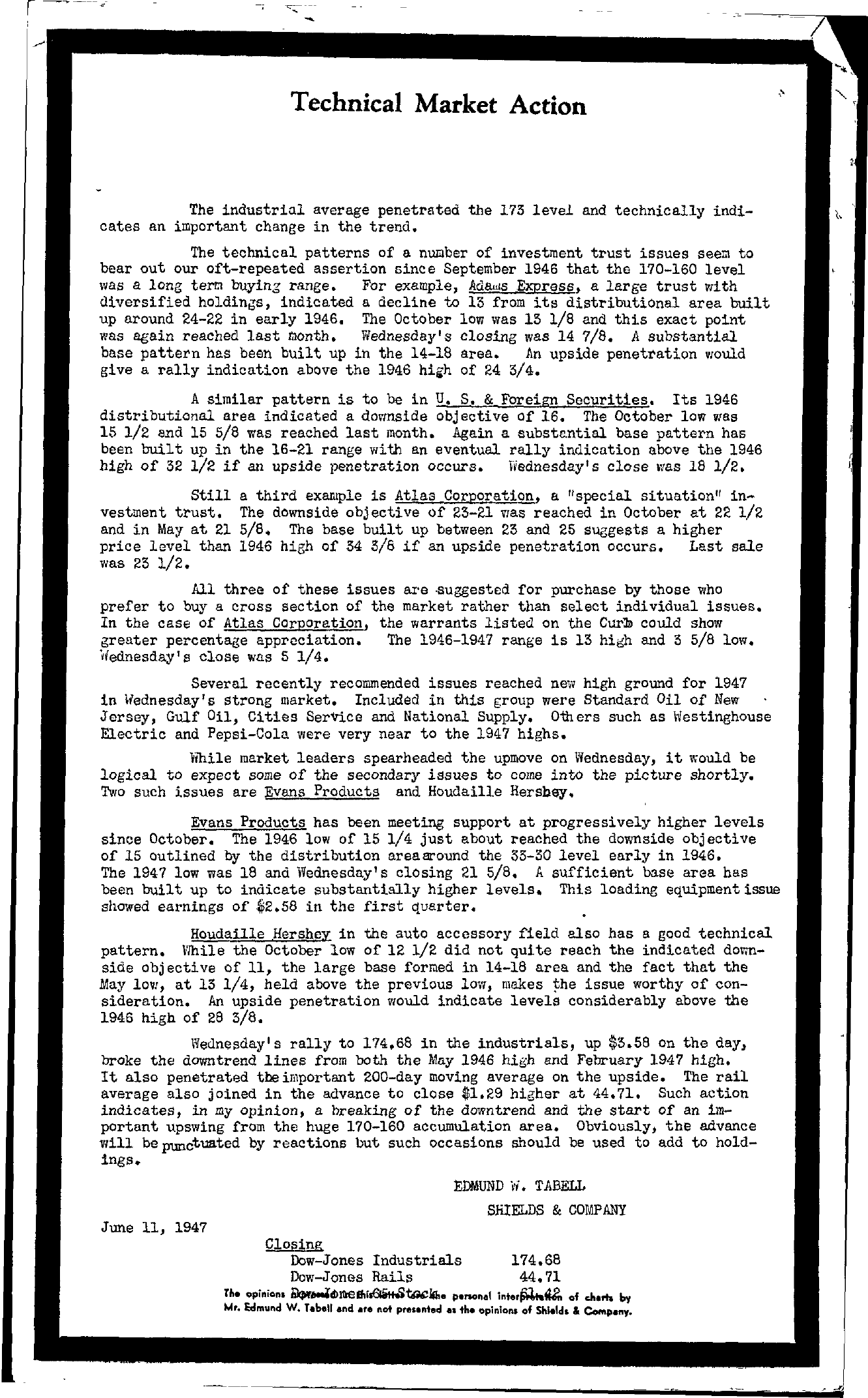 Technical Market Action The industrial average penetrated the 175 level and technically indicates an important change in the trend. The technical patterns of a number of investment trust issues seem to bear out our oft-repeated assertion since September 1946 that the 170-160 level was a long term buying range. For example, AdamS Express, a large trust with diversified holdinbs, indicated a decline to 15 from its distributional area built up around 24-22 in early 1946. The October low was 15 1/8 and this exact point was again reached last month. Wednesday's closing was 14 7/8. A substantial base pattern has been built up in the 14-18 area. An upside penetration would give a rally indication above the 1946 hih of 24 5/4. A similar pattern is to be in U. S. & Foreign Securities. Its 1946 distributional area indicated a downside objective of 16. The October low was 15 1/2 and 15 5/8 was reached last month. Again a substantial base pattern has been built up in the 16-21 range with an eventual rally indication above the 1946 high of 32 1/2 if an upside penetration occurs. Wednesday's close was 18 1/2. Still a third example is Atlas Corporation, a special Situation investment trust. The downside objective of 23-21 was reached in October at 22 1/2 and in May at 21 5/8. The base built up between 23 and 25 suggests a higher price level than 1946 high of 54 5/6 if an upside penetration occurs. Last sale was 25 1/2. All three of these issues are .suggested for purchase by those who prefer to buy a cross section of the market rather than select individual issues. In the case of Atlas Corporation, the warrants listed on the Cur could show greater percentage appreciation. The 1946-1947 range is 15 high and 5 5/8 low. '/ednesday's close was 5 1/4. Several recently recommended issues reached new high ground for 1947 in \iednesday's strong market. Included in this group were Standard Oil of New Jersey, Gulf Oil, Cities SerVice and National Supply. Others such as Westinghouse Electric and Pepsi-Cola were very near to the 1947 highs. While market leaders spearheaded the upmove on Wednesday, it would be logical to expect some of the secondary issues to come into the picture shortly. Two such issues are Evans Products and Houdaille Hersbey. Evans Products has been meeting support at progressively higher levels since October. The 1946 low of 15 1/4 just about reached the downside objective of 15 outlined by the distribution area around the 55-50 level early in 1946. The 1947 low was 18 and Wednesday's closing 21 5/8. A. sufficient base area has been built up to indicate substantially higher levels. This loading equipment issue showed earnings of 4i2.58 in the first Ciuarter. Houdaille Hershey in the auto accessory field also has a good technical pattern. Vlhile the October low of 12 1/2 did not quite reach the indicated down- side objective of 11, the large base formed in 14-18 area and the fact that the May lOVI, at 15 1/4, held above the previous low, makes he issue worthy of consideration. An upside penetration would indicate levelS considerably above the 1946 high of 28 5/8. Wednesday's rally to 174.68 in the industrials, up 5.58 on the day, broke the downtrend lines from both the May 1946 high and February 1947 high. It also penetrated the important 200-day moving average on the upside. The rail average also joined in the advance to close 1.29 higher at 44.71. Such action indicates, in my opinion, a breaking of the downtrend and the start of an important upswing from the huge 170-160 accumulation area. Obviously, the advance will be punctuated by reactions but such occasions should be used to add to hold- ings. l!DMUND l'i. TABELL June 11, 1947 SHIELDS & COMPANY Closing Dow-Jones Industrials 174.68 Dow-Jones Rails 44.71 Tho opinion. dlfIeS.is6litt.'lI!.. ponon.1 inter of chorb by Mr. Edmund W. rabell and .re not presented al the opinions of Shield, I. Company