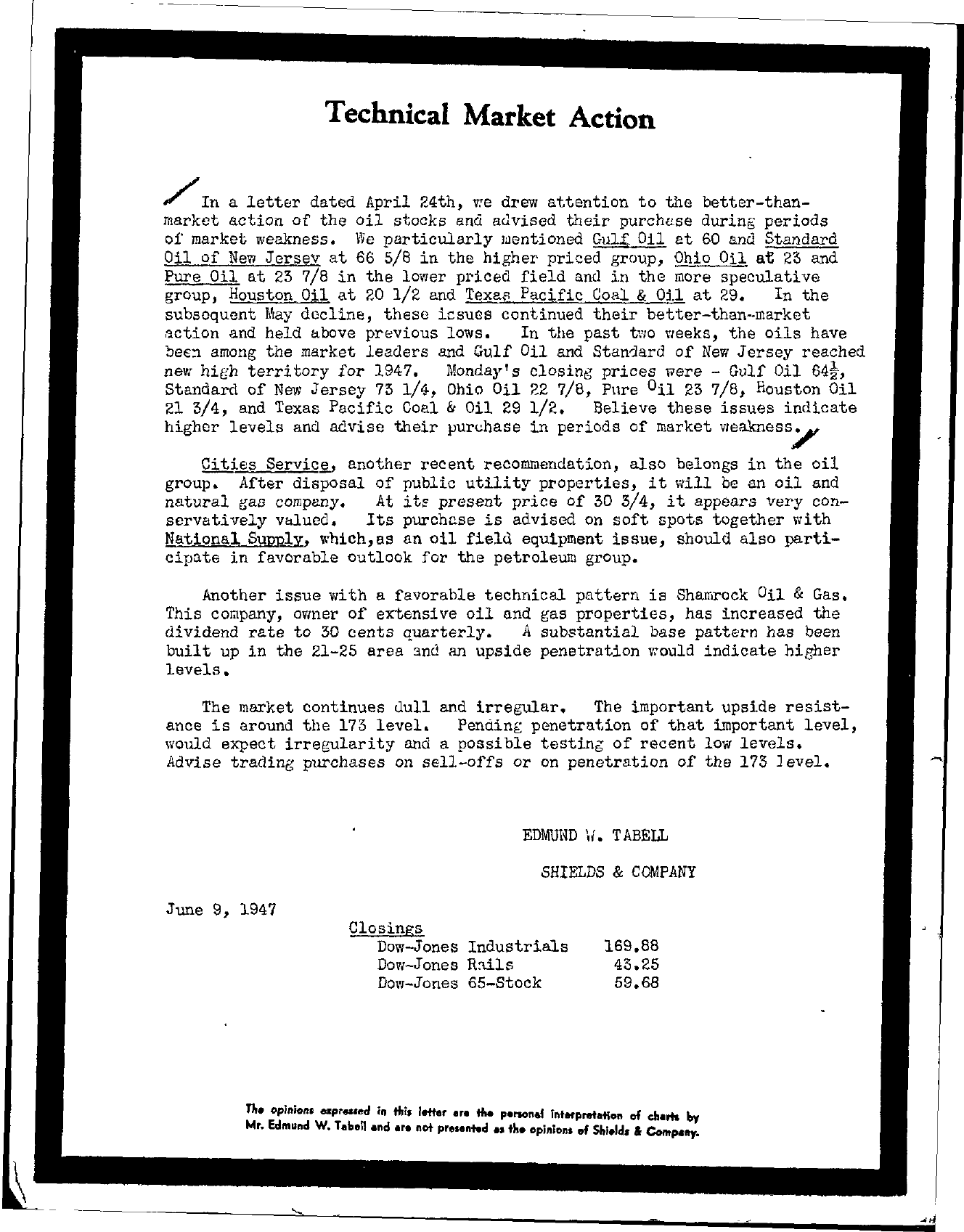 Technical Market Action In a letter dated April 24th, we drew attention to the better-than- market action of the oil stocks and advised their purchase during periods of market weakness. We particularly mentioned Gul! Oil at 60 and Standard Oil of New Jersev at 66 5/8 in the higher priced group, Ohio Oil a 25 and Pure Oil at 25 7/8 in the lower priced field and in the more speculative group, Houston Oil at 20 1/2 and Texafl Pacific Coal & Oi.l at 29. In the subsequent May decline, these icsues continued their better-than-market action and held above previous lows. In the past two Ieeks, the oils have beE among the market leaders and Gulf Oil and Standard of New Jersey reached new high territory for 1947. Monday's closing prices were – Gulf Oil 64t, Standard of New Jersey 75 1/4, Ohio Oil 22 7/8, Pure On 25 7/8, Houston Oil 21 5/4, and Texas Pacific Coal & Oil 29 1/2. Believe these issues indicate higher levels and advise their jJurt!hase in periods of market vleakness;l' Cities Service, another recent recommendation, also belongs in the oil group. After disposal of public utility properties, it will be an oil and natural gas company. At HE present price of 50 3/4, it appMrs very conservatively valued. Its purchc.se is advised on soft spots together with National Supply, wMch,as an oil field equi)ment issue, should also participate in favorable outlook for the petroleum group. Another issue with a favorable technical pattern is Shamrock Oil & Gas. This cor.tpany, ovmer of extensive oil and gas properties, has increased the dividend rate to 30 cents quarterly. A substantial base pattern has been built up in the 21-25 area 3nd an upside penetration would indicate hieher levels. The market continues dull and irregular. The important upside resistance is around the 175 level. Pending penetrat.ion of that important level, would expect irregularity and a possible testing of recent loVl levels. Advise trading purchases on sell-offs or on penetration of the 173 Jevel. June 9, 1947 EDMUND Ii. TABELL SHIELDS & COMPANY Closings Dow-Jones Industrials DoV/-Jones Rlils Dow-Jones 65-Stock 169.88 45.25 59.68 TIt. opln;on, apreued in this letter er. tM persone.i interpretation of cham by T.b.nMr. edMund W. end .r. not presented ., tl,. opinions of Shl.ld… Compcay.