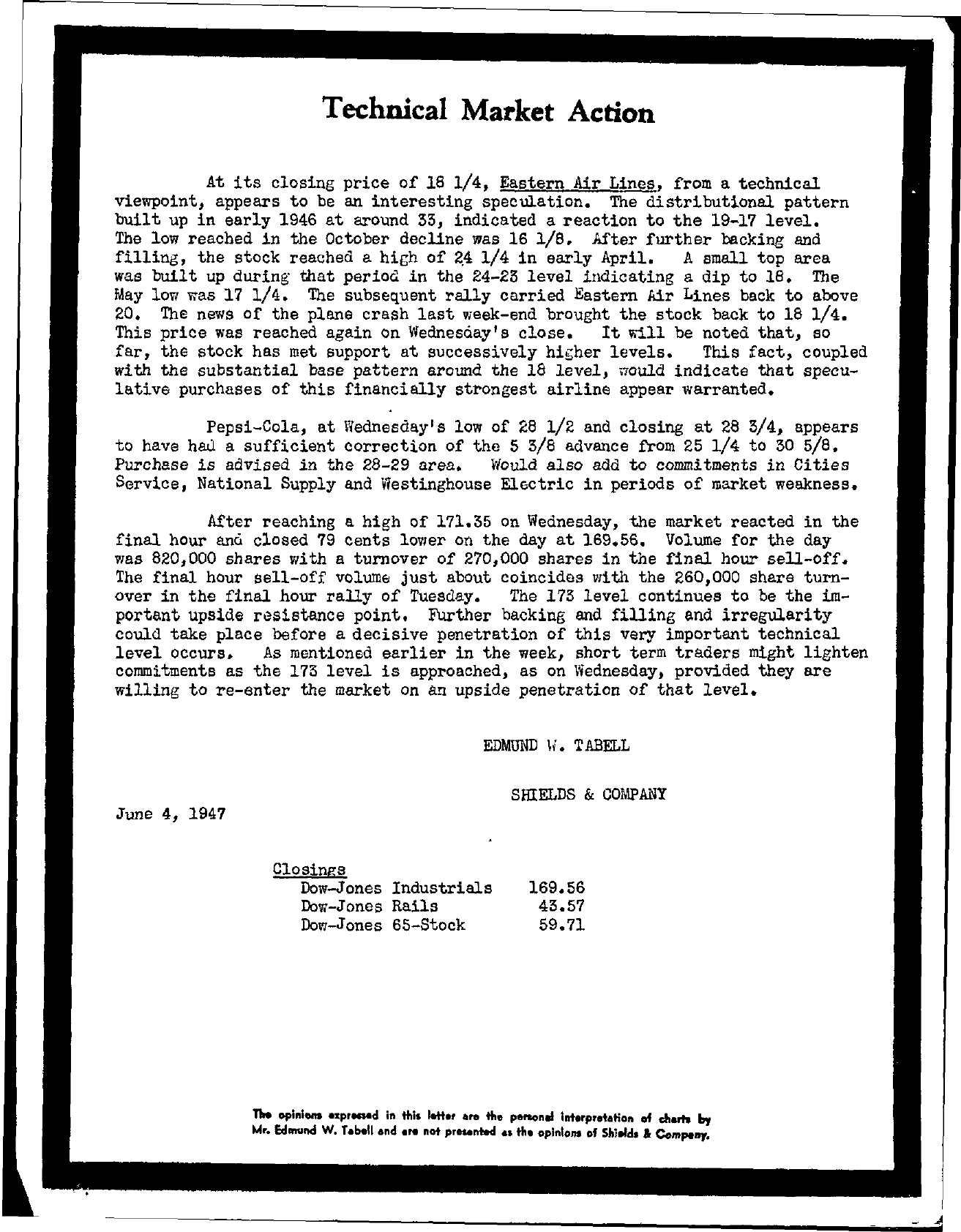 Technical Market Action At its closing price of 18 1/4, Eastern Air Lines, from a technical viewpoint, appears to be an interesting speculation. The distributional pattern built up in early 1946 at around 55, indicated a reaction to the 19-17 level. The low reached in the October decline was 16 1/8. After further backing and filling, the stock reached a high of 2,4 1/4 in early April. A small top area was built up during that perio in the 24-25 level indicating a dip to 18. The May 10Vl was 17 1/4. The subsequent rally carried Eastern Air Lines back to above 20. The news of the plane crash last week-end brought the stock back to 18 1/4. This price was reached again on Wednes6ay's close. It will be noted that, so far, the stock has met support at successively higher levels. This fact, coupled with the substantial base pattern around the 18 level, would indicate that speculative purchases of this financially strongest airline appear warranted. Pepsi-Cola, at Wednesday's low of 28 1/2 and closing at 28 5/4, appears to have hau a sufficient correction of the 5 5/8 advance from 25 1/4 to 50 5/8. Purchase is adVised in the 28-29 area. Would also add to commitments in Cities Service, National Supply and Westinghouse Electric in periods of market weekness. After reaching a high of 171.55 on Wednesday, the market reacted in the final hour ano closed 79 cents lower on the day at 169.56. Volume for the day was 820,000 shares with a turnover of 270,000 shares in the final hour sell-off. The final hour sell-off volume just about coincides with the 260,000 share turnover in the final hour rally of Tuesday. The 175 level continues to be the important upside resistance pOint. Further backing and filling and irregularity could take place before a decisive penetration of this very important technical level occurs. As mentioned earlier in the week, short term traders might lighten commitments as the 175 level is approached, as on Wednesday, provided they are willing to re-enter the market on an upside penetration of that level. June 4, 1947 EDMUND Ii. TABELL SHIELDS & COMPANY CloSings Dow-Jones Industrials Dow-Jones Rails Dow-Jones 65-Stock 169.56 45.57 59.71 The ophtlens p,tllHd in this I.-H., fllre the penon. int.rpretation of cham by ,. Edmund W. f.b.U end .,. not pres.nted ., th. opintOM of Shl.1d. .. Compe,. -1