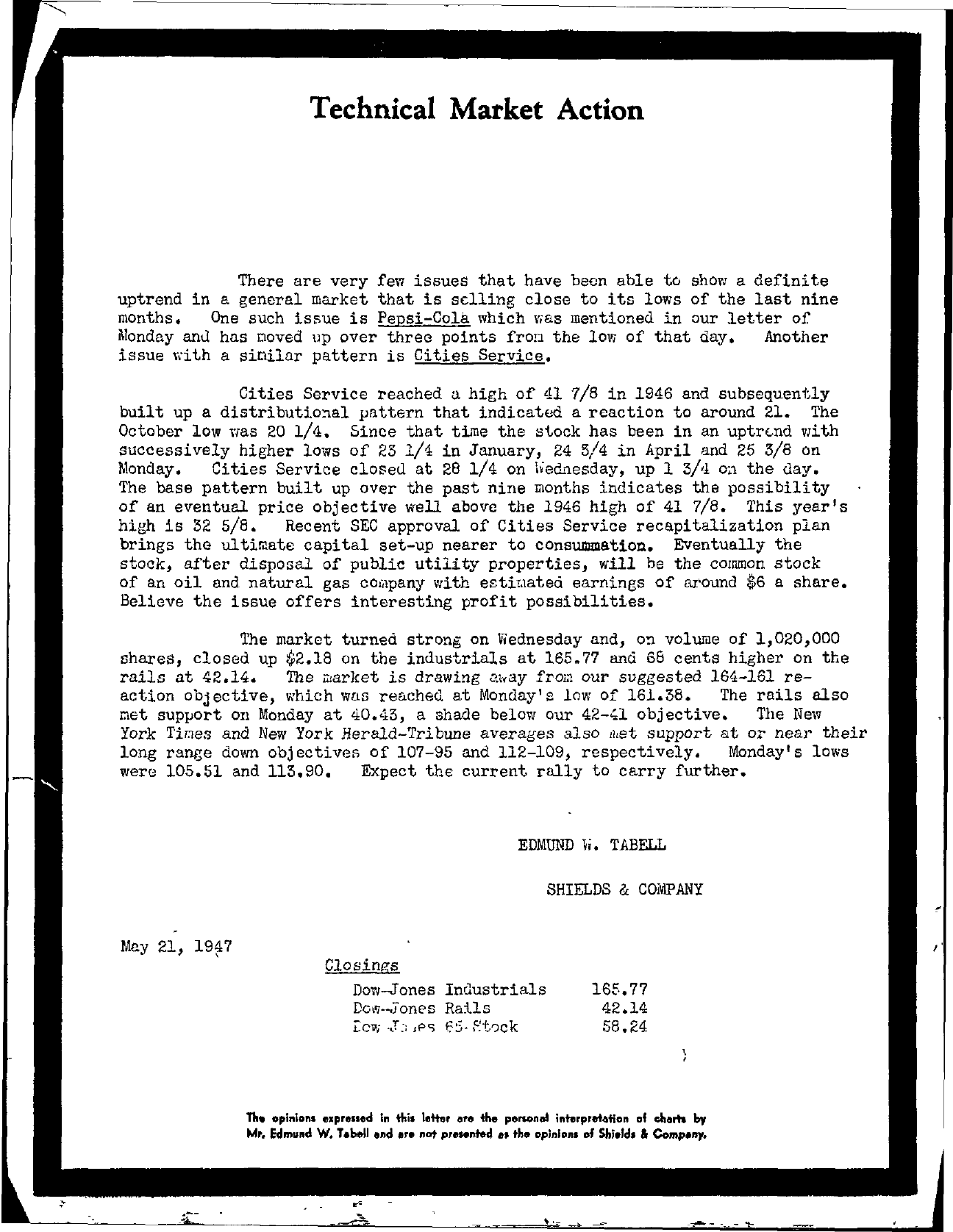 Technical Market Action There are very few issues that have been able to show a definite uptrend in a general market that is selling close to its lows of the last nine months. One such issue is Pepsi-Cola which Vias mentioned in our letter of i\londay anLl has Doved up over three points froJ the low of that day. Another issue y.-ith a sillilar pattern is Cities Service. Cities Service reached a high of 41 7/8 in 1946 and subsequently built up a distributioal pattern that indicated a reaction to around 21. The October low nas 20 1/4. Since that time the stock has been in an uptrGnd vlith successively higher lows of 23 1/4 in January, 24 5/4 in April and 25 5/8 on Monday. Cities Service closeu at 28 1/4 on liednesday, up 1 5/4 0;1 the day. The base pattern built up over the past nine months indicates the possibility of an eventual price objective well above the 1946 high of 41 7/8. This year's high is 52 5/8. Recent SEC approval of Cities Service recapitalization plan brings the ultimate capital set-up nearer to cOnsummation. Eventually the stock, after disposal of public utility properties, will be the common stock of an oil and natural gas co,;lpany with estir.lateci earnings of around 6 a share. Believe the issue offers interesting profit possibilities. The market turned strong on Wednesday and, o volume of 1,020,000 shares, closed up 2.18 on the industrials at 165.77 and 68 cents higher all the rails at 42.14. The lllarket is drawing m,ay from our suggested 164-161 reaction obj ective, which was reached at Monday's low of 161.58. The rails also r.let supIJort OIl Monday at 40.45, a shade below our 42-n objective. The New York Times and New York Herald-Tribune averages also Jlet support at or near their long range down objectiveR of 107-95 and 112-109, respectively. Monday's lows were 105.51 and 115.90. Expect the current rally to carry further. May 21, 197 EDMUND Ii. TABELL SHIELDS & COMPANY Closings Dow-Jones Industrials Do,–';onE's Rails Lew ..1; JPq f5 ft')ck lSf.77 42.14 58.24 Th. opinions expressed in this letter ere the personol interpretotion of charta by …..,. Edmund W. T.bell end ere not pr…nted. ., the opin.oM of Shi.fd. A Compa,.