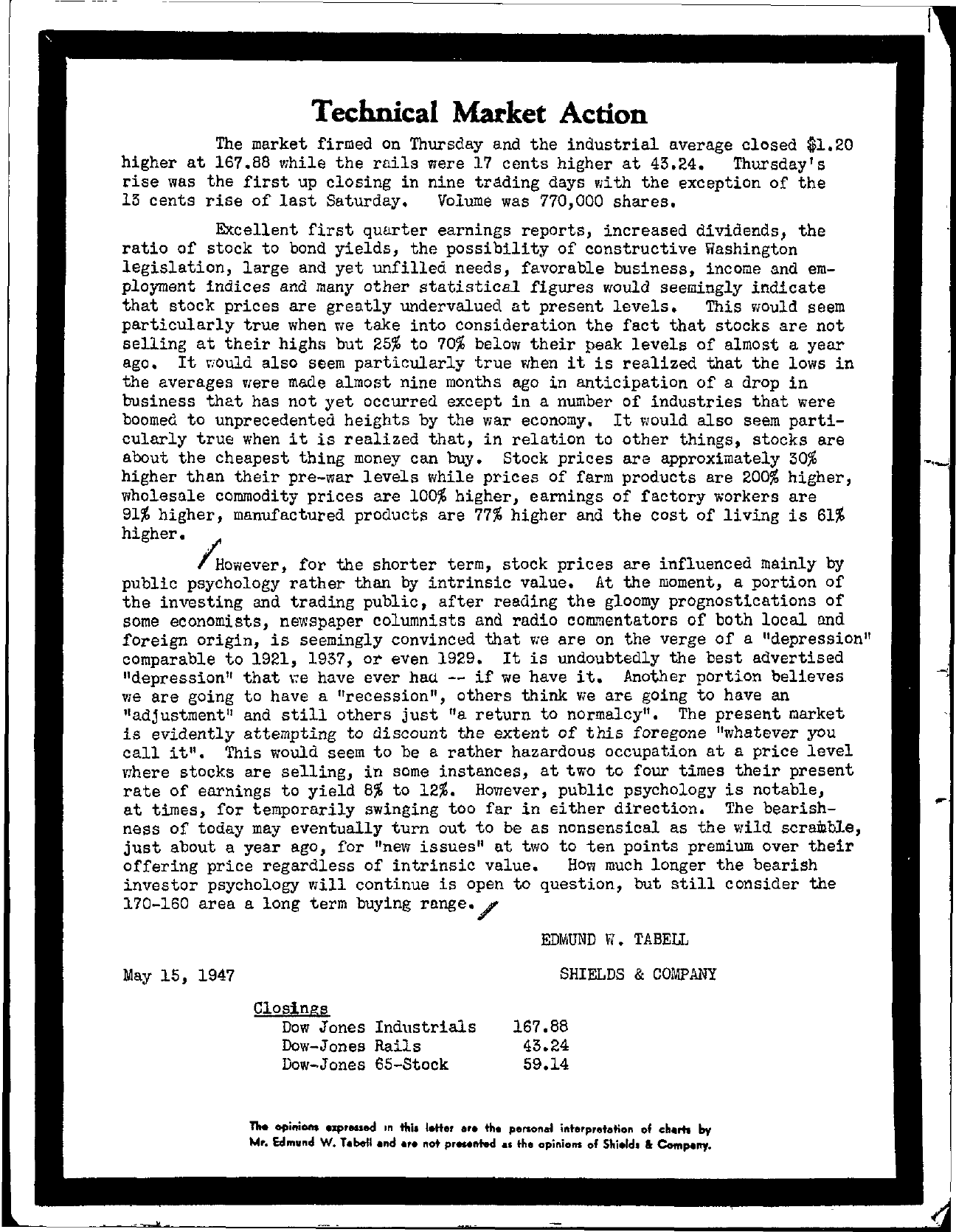 Technical Market Action The market firmed on Thursday and the industrial average closed 1.20 higher at 167.88 while the rails were 17 cents higher at 45.24. Thursday's rise was the first up closing in nine trading days with the exception of the 15 cents rise of last Saturday. Volume was 770,000 shares. Excellent first quurter earnings reports, increased dividends, the ratio of stock to bond yields, the possibility of constructive fiashington legislation, large and yet unfilled needs, favorable business, income and employment indices and many other statistical figures would seemingly indicate that stock prices are greatly undervalued at present levels. This would seem particularly true when we take into consideration the fact that stocks are not selling at their highs but 25 to 70 below their peak levels of almost a year ago. It riould also seem particularly true when it is realized that the lows in the averages Vlere made almost nine months ago in anticipation of a drop in business that has not yet occurred except in a number of industries that were boomed to unprecedented heights by the war economy. It 1V0uld also seem particularly true when it is realized that, in relation to other things, stocks are about the cheapest thing money can buy. Stock prices are approximately 50 higher than their pre-war levels while prices of farm products are 200 higher, wholesale commodity prices are 100 higher, earnings of factory workers are 91 higher, manufactured products are 77 higher and the cost of living is 61 higher. owever, for the shorter term, stock prices are influenced mainly by public psychology rather than by intrinsic value. At the moment, a portion of the investing and trading public, after reading the gloomy prognostications of some economists, newspaper columnists and radio coentators of both local and foreign origin, is seemingly convinced that Vie are on the verge of a depression comparable to 1921, 1957, or even 1929. It is undoubtedly the best advertised depression that \7e have ever haa — if we have it. Another portion believes we are going to have a recession, others think we are going to have an adjustment and still others just a return to normalcy. The present market is evidently attempting to discount the extent of this foregone whatever you call it. This would seem to be a rather hazardous occupation at a price level \7here stocks are selling, in some instances, at two to four times their present rate of earnings to yield 8 to 12. Honever, public psychology is notable, at times, for temporarily swinging too far in either direction. The bearishness of today may eventually turn out to be as nonsensical as the wild scramble, just about a year ago, for new issues at two to ten points premium over their offering price regardless of intrinsic value. How much longer the bearish investor psychology will continue is open to question, but still consider the 170-160 area a long term buying range. EDMUND H. TABELL May 15, 1947 SHIELDS & COMPANY Closings Dow Jones Industrials Dow-Jones Rails Dow-Jones 65-Stock 167.88 45.24 59.14 n.. opiniOft e.p,eaed In this tetter r. the pet'W intarpretation of cherts by Mr. Edmund W. T.ban and .r. not present.d .s the opinions of Slti.td. , Company.