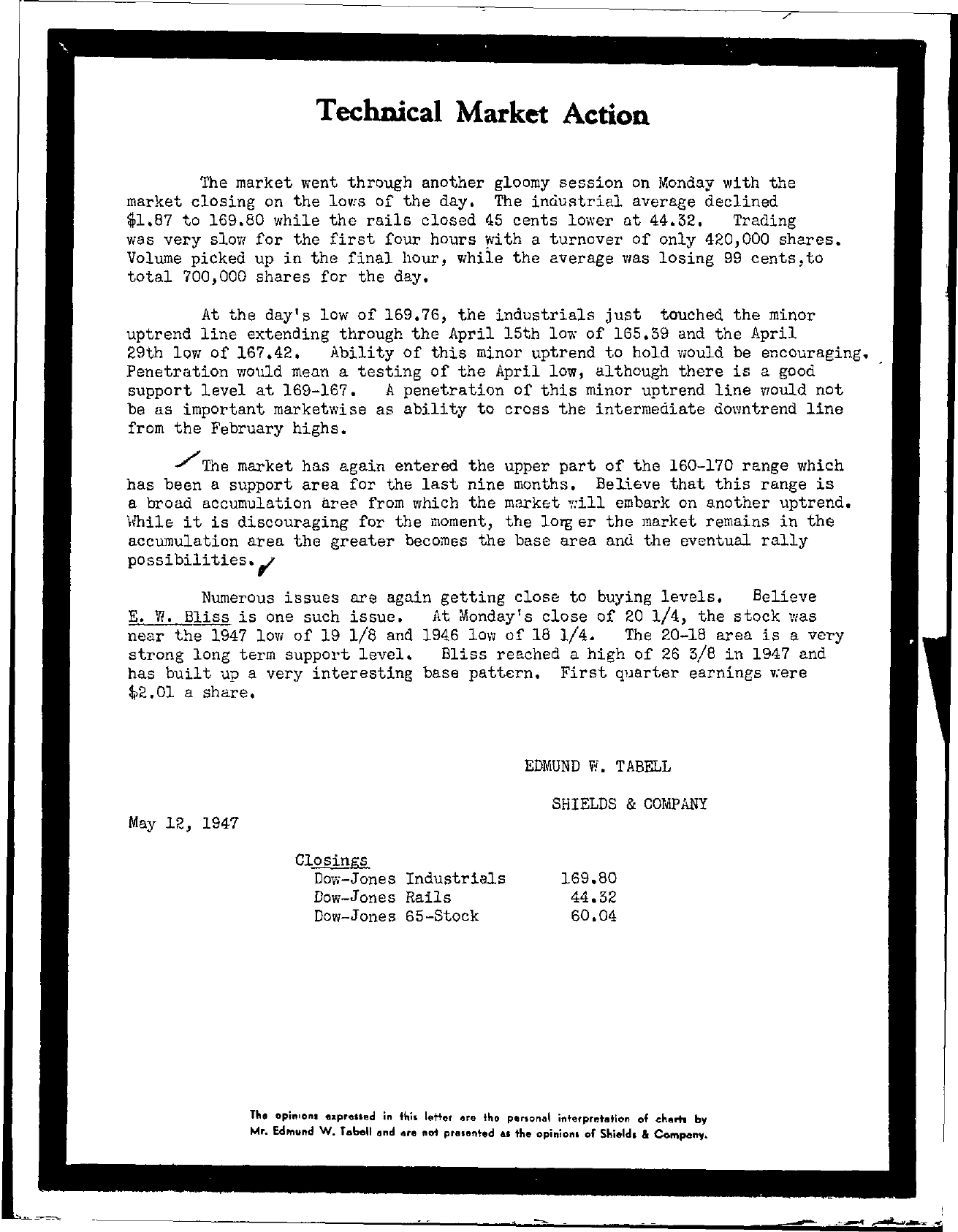 Technical Market Action The market went through another gloomy session on Monday with the market closing on the lov!s of the day. The industrial average declined 1.87 to 169.80 while the rails closed 45 cents lower at 44.52. Trading was very slow for the first four hours lith a turnover of only 420,000 shares. Volume picked up in the final hour, while the average Vias losing 99 cents, to total 700,000 shares for the day. At the day's low of 159.76, the industrials just touched the minor uptrend line extending through the April 15th low of 165.59 and the April 29th loVi of 167.42. Ability of this minor uptrend to hold would be encouraging. Penetration wo\lld mean a testing of the April low, although there is a good support level at 169-167. A penetration of this minor uptrend line Vlould not be as important marketwise as ability to cross the intermediate downtrend line from the February highs. /The market has again entered the upper part of the 150-170 range which has been a support area for the last nine months. Believe that this range is a broad accumulation il.re from which the market 'I!ill embark on another uptrend. II'hile; it is discouraging for the moment, the 1015 er the market remains in the accumulation area the greater becomes the base area and the eventual rally pOssibilities. Numerous issues are again getting close to buying levels. Believe E. VI. Bliss is one such issue. At Monday's close of 20 1/4, the stock Vias near the 1947 low of 19 l/e and 1946 low of 18 1/4. The 20-18 area is a very strong long term support level. Bliss reached a high of 26 5/8 in 1947 and has buHt up a very interesting base pattern. First quarter earnings v;ere 2.0l a share. May 12, 1947 EDMUND Vi. TABELL SHIELDS & COMPANY Closings Dow-Jones Industrials Dow-Jones Rails Dow-Jones 55-Stock 169.80 44.52 50.04 The opinions iIllp,-oued in this leHe, MO tho penon.!lt interpretation of cham by Mr. Edmund W. Tobell lind re not presented 41 the opinionl of Shield. & Compony.