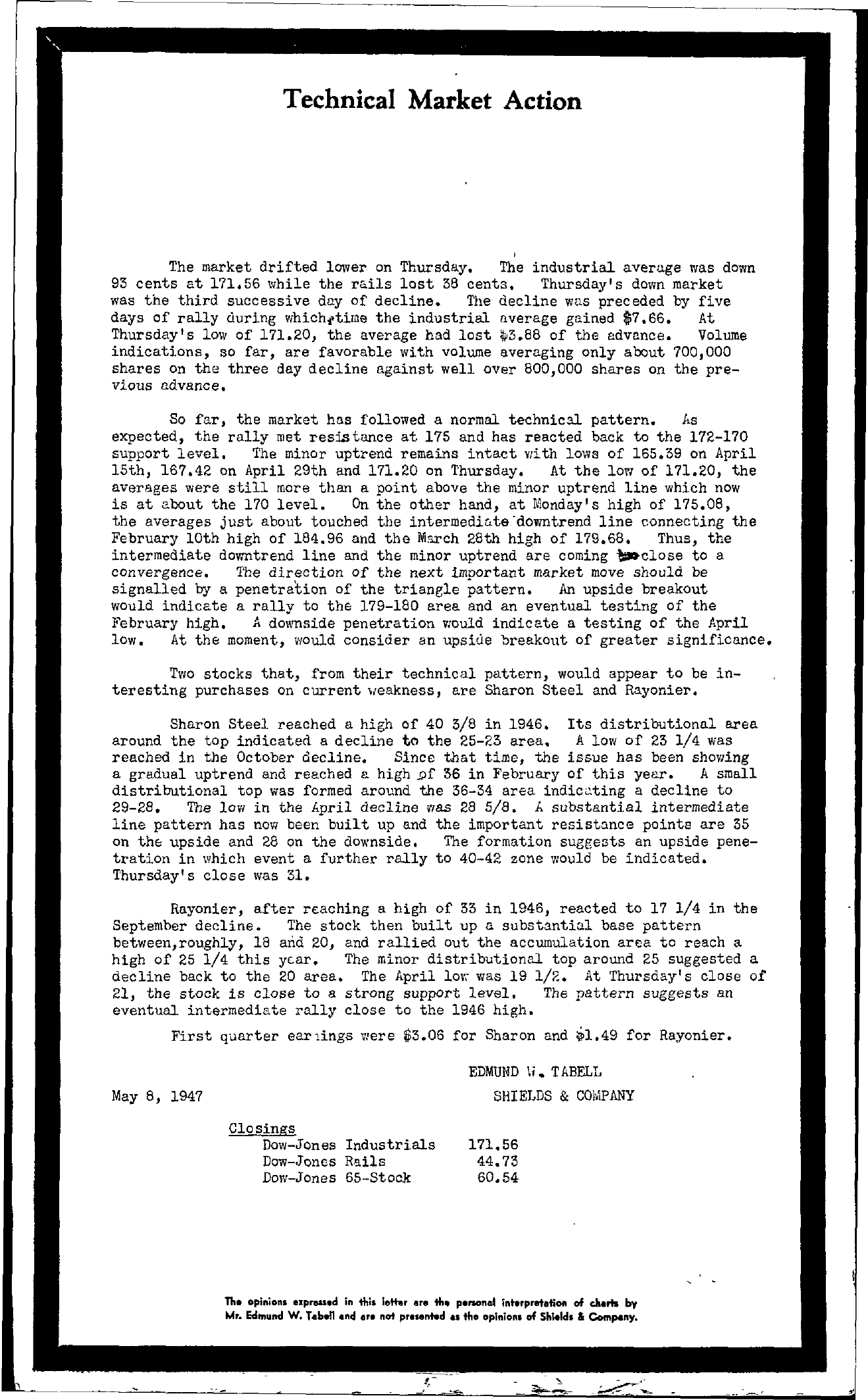 Technical Market Action The market drifted lower on Thursday. The industrial average was down 95 cents at 171.56 while the rails lost 58 cents. Thursday's down market was the third successive day of decline. The decline was preceded by five days of rally during whichi,tirne the industrial average gained 7.66. At Thursday's low of 171.20, the average had lost ,,3.88 of the advance. Volume indications, so far, are favorable with volume averaging only about 700,000 shares on the three day decline against well over 800,000 shares on the previous a.dvance. So far, the market has followed a normal technical pattern. As expected, the rally met resistance at 175 and has reacted back to the 172-170 support level. The minor uptrend remains intact Vlith lows of 165.59 on April 15th, 167.42 on April 29th and 171.20 on Thursday. At the lovi of 171.20, the averages were still more than a point above the minor uptrend line which now is at about the 170 level. On the other hand, at Monday's high of 175.08, the averages just about touched the intermedillta-downtrend line connecting the February lOth high of 184.96 and the March 28th high of 179.68. Thus, the intermediate downtrend line and the minor uptrend are coming close to a convergence. The dirction of the next important market move should be signalled by a penetration of the triangle pattern. An upside breakout would indicate a rally to the 179-180 area and an eventual testing of the February high. A downside penetration v/Ould indicate a testing of the April low. At the moment, would consider an upside breakout of greater significance. Two stocks that, from their technical pattern, would appear to be interesting purchases on current .,eakness, are Sharon Steel and Rayonier. Sharon Steel reached a high of 40 5/8 in 1946. Its distributional area around the top indicated a decline to the 25-25 area, A low of 25 1/4 was reached in the October decline. Since that time, the issue has been shovling a gradual uptrend and reached a high 9f 56 in February of this year. A small distributional top was formed around the 36-54 area indic'ting a decline to 29-28. The lov, in the April decline Vias 28 5/8. A substantial intermediate line pattern has non been built up and the important resistance points are 55 on the upside and 28 on the downside. The formation sugge5ts an upside pene- tration in which event a further rally to 40-42 zone would be indicated. 'I'hursday's close was 51. Rayonier, after reaching a high of 55 in 1946, reacted to 17 1/4 in the September decline. The stock then built up a substantial base pattern between, roughly, 18 and 20, and rallied out the accwDulation area to reach a high of 25 1/4 this year. The minor distributional top around 25 suggested a decline back to the 20 area. The April lov; was 19 1/2. At Thursday's close of 21, the stock is close to a strong support level. The pattern suggests an eventual intermediate rally close to the 1946 high. First quarter ear,ings vlere 5.06 for Sharon and 1.49 for Rayonier. May 8, 1947 Closings Dow-Jones Industrials Dow-Jones R'l.i1s Dow-Jones 65-Stock EDMUND Ii. TABELL SHIELDS & COliIPANY 171.56 44.75 60.54 Th. opinions .Ipressed in this letter are th, p.rson interpretation of dt….. by Mre Edmund W. T.b.n end ere not pr.sented as the opinions of Sht.ldl I eompeny. —.,