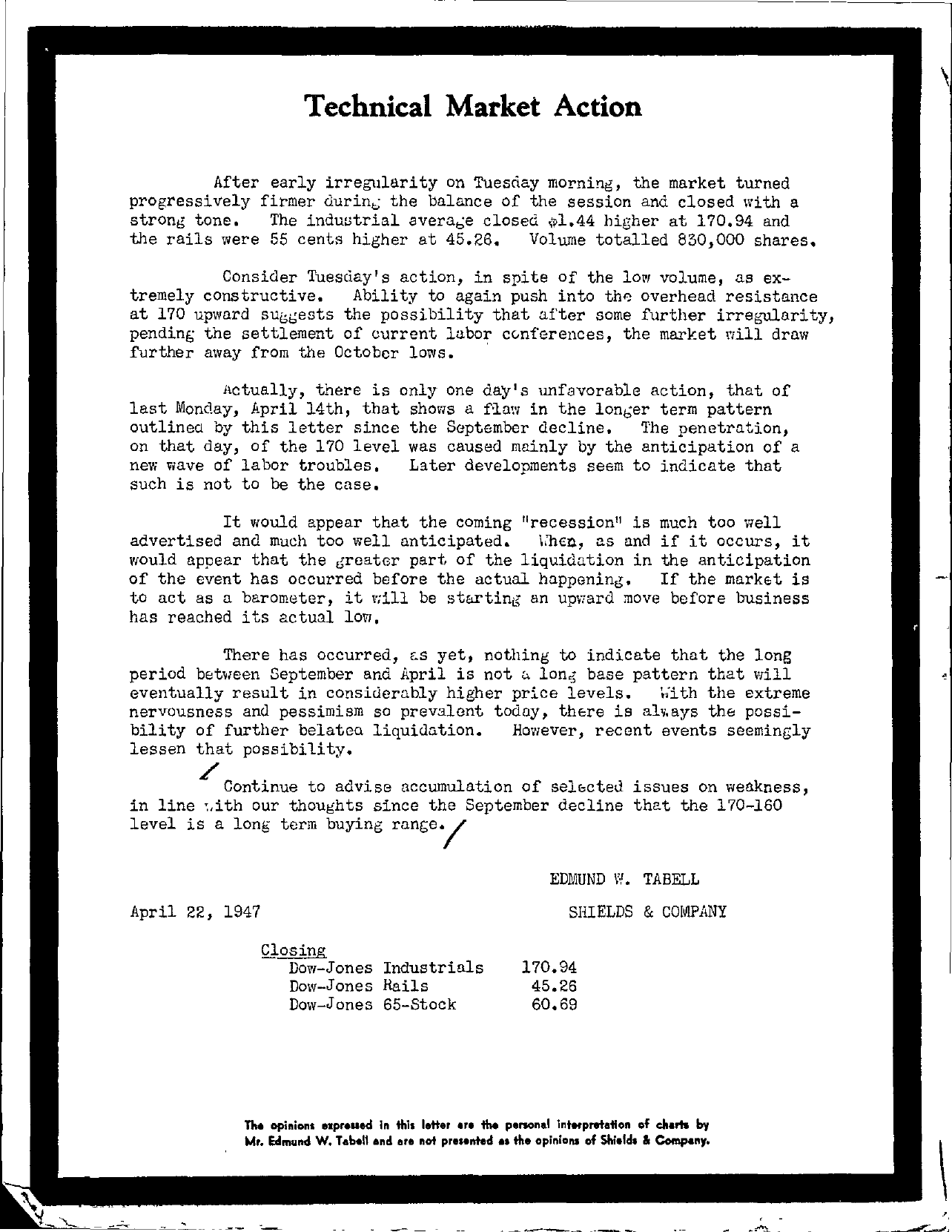 Technical Market Action After early irrellarity on Tuesday morning, the market turned progressively firmer durin,; the balance of the session and closed with a stron tone. The induGtrial avera,;e closed 1.44 higher at 170.94 and the rails were 55 cents higher at 45.26. Volume totalled 830,000 shares. Consider Tuesday's action, in spite of the lO1 volume, as extremely constructive. Ability to again push into thp. overhead resistance at 170 upward su;gests the possibility that after some further irregularity, pending the settlement of current labor c0nferences, the market will draw further away from the October lows. Actually, there is only one day's llnfavorable action, that of last Monday, April 14th, that shows a Haw in the longer term pattern outlined by this letter since the September decline. 1'he penetration, on that day, of the 170 level was caused mainly by the anticipation of a new wave of labor troubles. L9.ter developments seem to indicate that such is not to be the case. It would appear that the coming recession is much too well advertised and much too well anticipated. \,'hIl, as and if it occurs, it Vlould appear that the .,reater part of the liquidation in the anticipation of the event has occurred before the actual happenin5' If the markt is to act as a barometer, it v;ill be stllltiniS an up\iSrd move before business has reached its actual lovi. There has occurred, &s yet, nothing to indicate that the long period bet/een September and April is not (, lon;; base pattern that will eventually result in considerably higher price levels. hith the extreme nervousness and pessimism so prevalent today, thue is alv.ays the possibility of further belatGQ liquidution. However, recent events seemingly lessen that possibility. ,/ Continue to advise accumulation of selGcted issues on weakness, in line ith our thoughts since the September decline that the 170-160 level is a long term buying range.;! April 22, 1947 ClOSing Dov/-Jones Industrials Dow-Jones Hails Dow-Jones 65-Stock EDMUND W. TABELL SHIELDS & COMPANY 170.94 45.26 60.69 . Th. opinions upr.Qed In this letter .r. tn. persona! interpretation of charts by Mr. Edmund W. T.b.1t end are not pre..nted the opinions of Shi.ld, Company. \