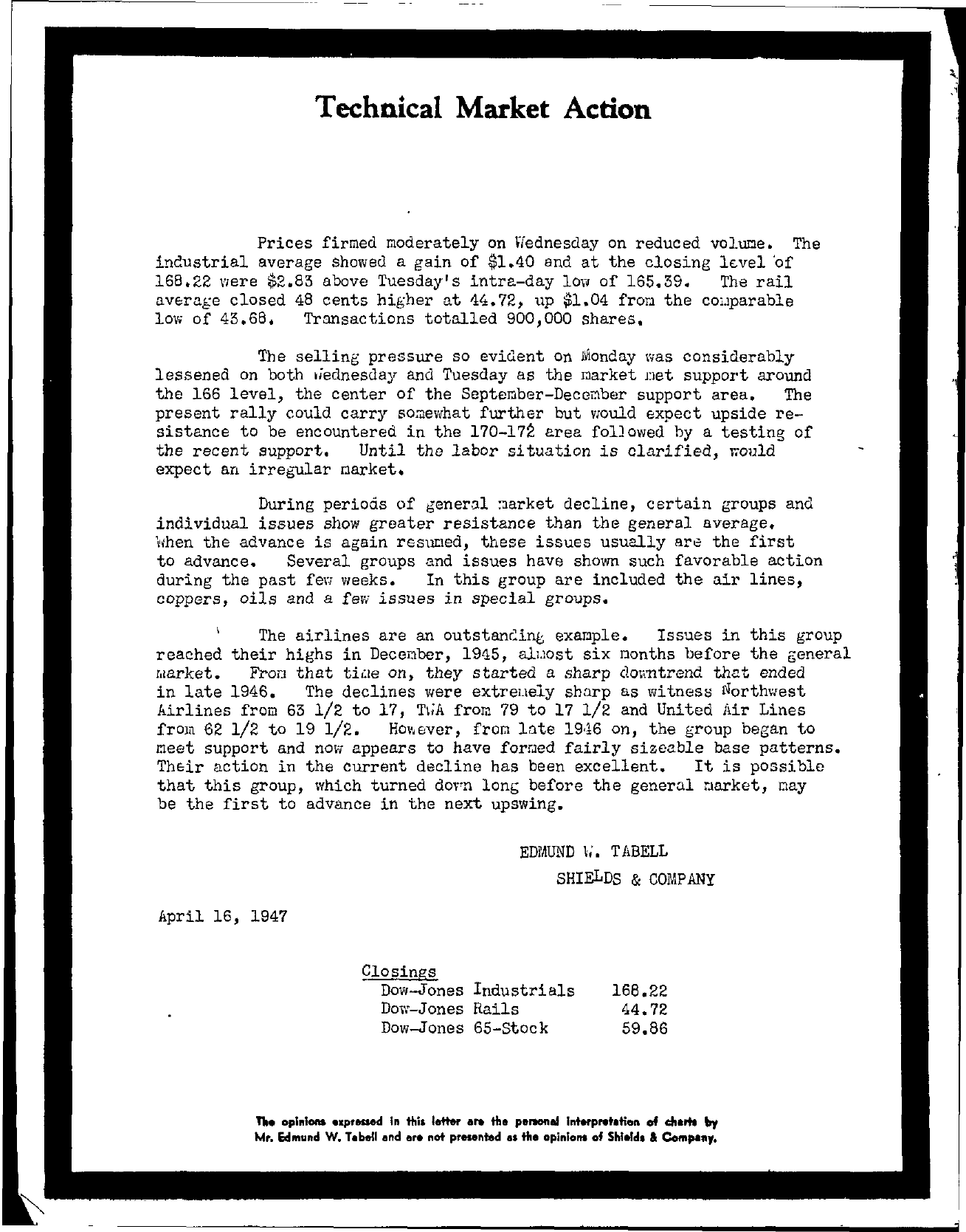 Technical Market Action Prices firmed moderately on Hednesday on reduced voluoe. The incustrial average showed a gain of 1.40 and at the closing lvel 'of 168.22 were 2.83 above Tuesday's intra-day low of 165.59. The rail ave,ra;e closed 48 cents higher at 44.72, up 1.04 fron the cOl.lparable low of 43.68. Transactions totalled 900,000 shares. The selling pressure so evident on londay was considerably lessened on both ,jednesday and Tuesday as the market net support around the 166 level, the center of the September-Deccnber support area. The present rally could carry somewhat further but vlOuld e,xpect upside resistance to be encountered in the 170-17 area followed by a testing of the recent support. Until the labor situation is clarified, l,ould expect an irregular market. During periods of t5'eneral larket decline, certain groups and individual issues show greater resistance than the general average. lihen the advance is again resumed, these issues usually are the first to advance. Several groups and issues have shown such favorable action during the past fer; weeks. In this group are included the air lines, coppers, oils and a few issues in special groups. The airlines are an outstanGin example. Issues in this group reached their highs in Decer1ber, 1945, alJ.1ost six nonths before the general Market. Fron that ti,le on, they started a sharp dovmtrend that ended in late 1946. The declines were extreuely sharp as witness lorthVlest Airlines from 63 1/2 to 17, T\;A from 79 to 17 1/2 and United Air Lines from 62 1/2 to 19 1/2. HOMNer, from late 19,16 on, the group began to eet support and now appears to have formed fairly sizeable base patterns. The,ir action in the current decline has been excellent. It is possible that this group, which turned doY'n lonG before the general rJarket, nay be the first to advance in the next upswing. April 16, 1947 EDMUND \;. TABELL SHIELDS & COMPANY Closings Dow-Jones Industrials Dow-Jones Rails Dow-Jones 65-Stock 168.22 44.72 59.86 n. oplniOftl expressed In this letter art the pertonel lnterpNlt.tion of cha' by a. Com,..,.M,. Edmund W. T.betl end ere not presented the opinions of Shield, a