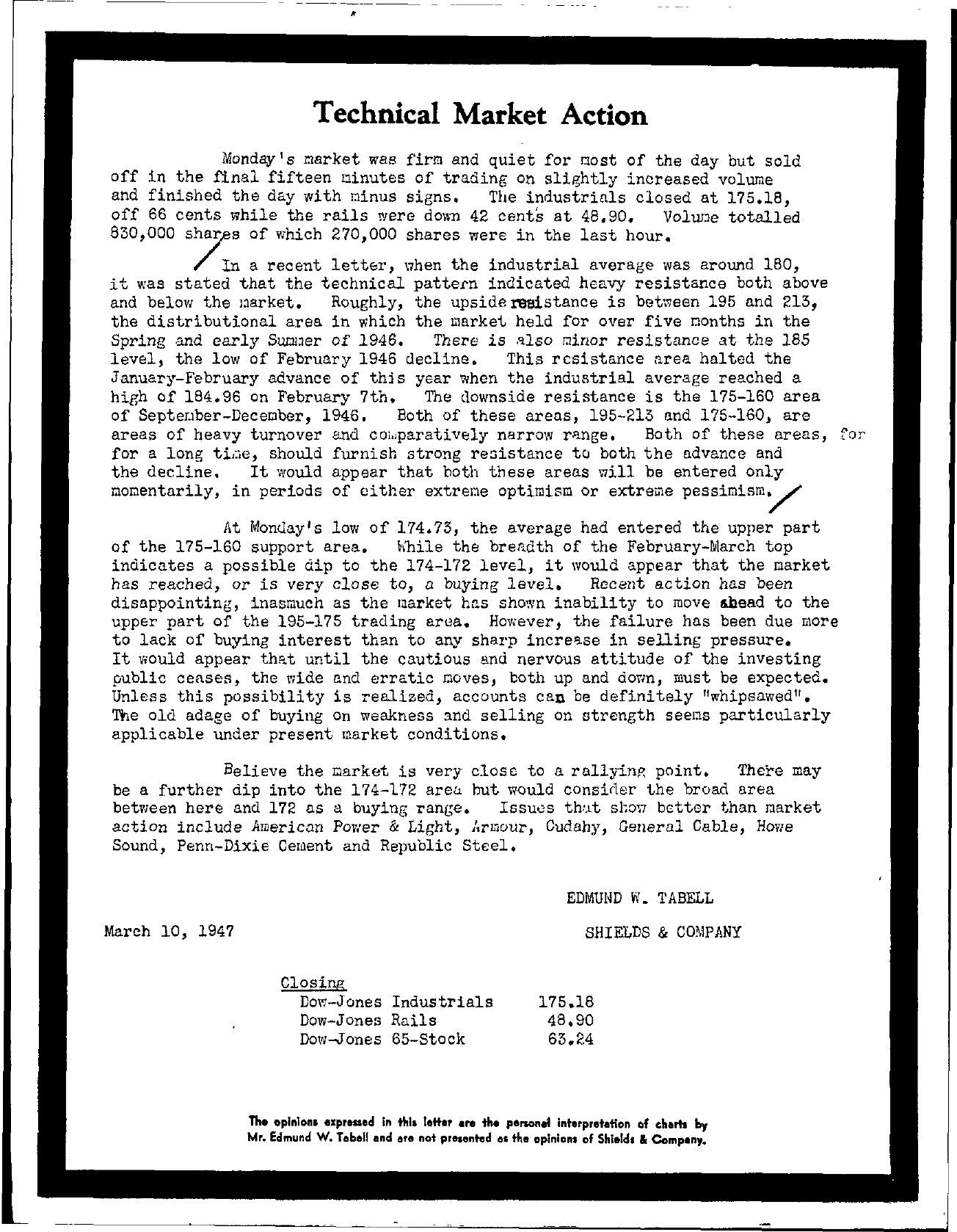 Technical Market Action Monday's Jlarket was firm and quiet for nost of the day but sold off in the final fifteen ninutes of trading on slightly increased volume and finished the day with ninus signs. The industrials closed at 175.18, off 66 cents while the rails were down 42 cents at 48.90. VolwJe totalled 830,000 shas of which 270,000 shares were in the last hour. / In a recent letter, when the industrial average was around 180, it was stated that the technical pattern indicated heavy resistance both above and below the lJarket. Roughly, the upside resistance is between 195 and 213, the distributional area in which the Llarket held for over five nonths in the Spring and early SUJ;llJer of 1946. There is .9.1so r.Jinor resistance at the 185 level, the low of February 1946 decline. This resistance area halted the January-February advance of thj s year when the industrial average reached a high of 184.96 on February 7th. The downside resistance is the 175-160 area of Septef.Jber-DecetJber, 1946. Both of these areas, 195-213 and 175-160, are areas of heavy turnover and cQiparatively narrow r'lnge. Both of these areas, for for a long ti,;e, should furnish strong renistance to both the advance and the decline. It would appear that both these areas will be entered only tJotJentarily, in periods of either extrelJe optitJistJ or extreiile peSSimism/, At Monday's low of 174.75, the average had entered the upper part of the 175-160 support area. lI'hile the breadth of the February-March top indicates a possible dip to the 174-172 level, it would appear that the tJarket has reached, or is very close to, Cl buying level. Recent action has been disappointing, inastJuch as the luarket has shown inability to move Uiead to the upper part of the 195-175 trading area. However, the failure has been due more to lack of buying interest than to any sharp increase in selling pressure. It would appear that until the cautious and nervous attitude of the investing public ceases, the wide and erratic noves, both up and down, must be expected. Unless this possibility is realized, accounts can be definitely whipsawed. The old adage of buying on weakness 3.nd selling on strength SeelJS particularly applicable under present market conditions. Believe the market is very close to a rallnp, pOint. There may be a further dip into the 174-l72 areu but would consiner the broad area between here and 172 as a buying range. Issu8s that S1;o'7 better than market action include American Power & Light, j,rmour, Cudahy, General Cable, Howe Sound, Penn-Dixie Celuent and Republic Steel. March 10, 1947 EDMUND IV. TABELL SHIELDS & CmlPANY Closing Dow-Jones Industrials Dow-Jones Ruils Dow-Jones 65-Stock 175.18 48.90 63.24 Th. oph,lonl exprOSed in thll tette, ..re the person. Interpretation of et..rts by Mr. Edmund W. Tabell and are not presented as the opinions of Shields Compeny. 1