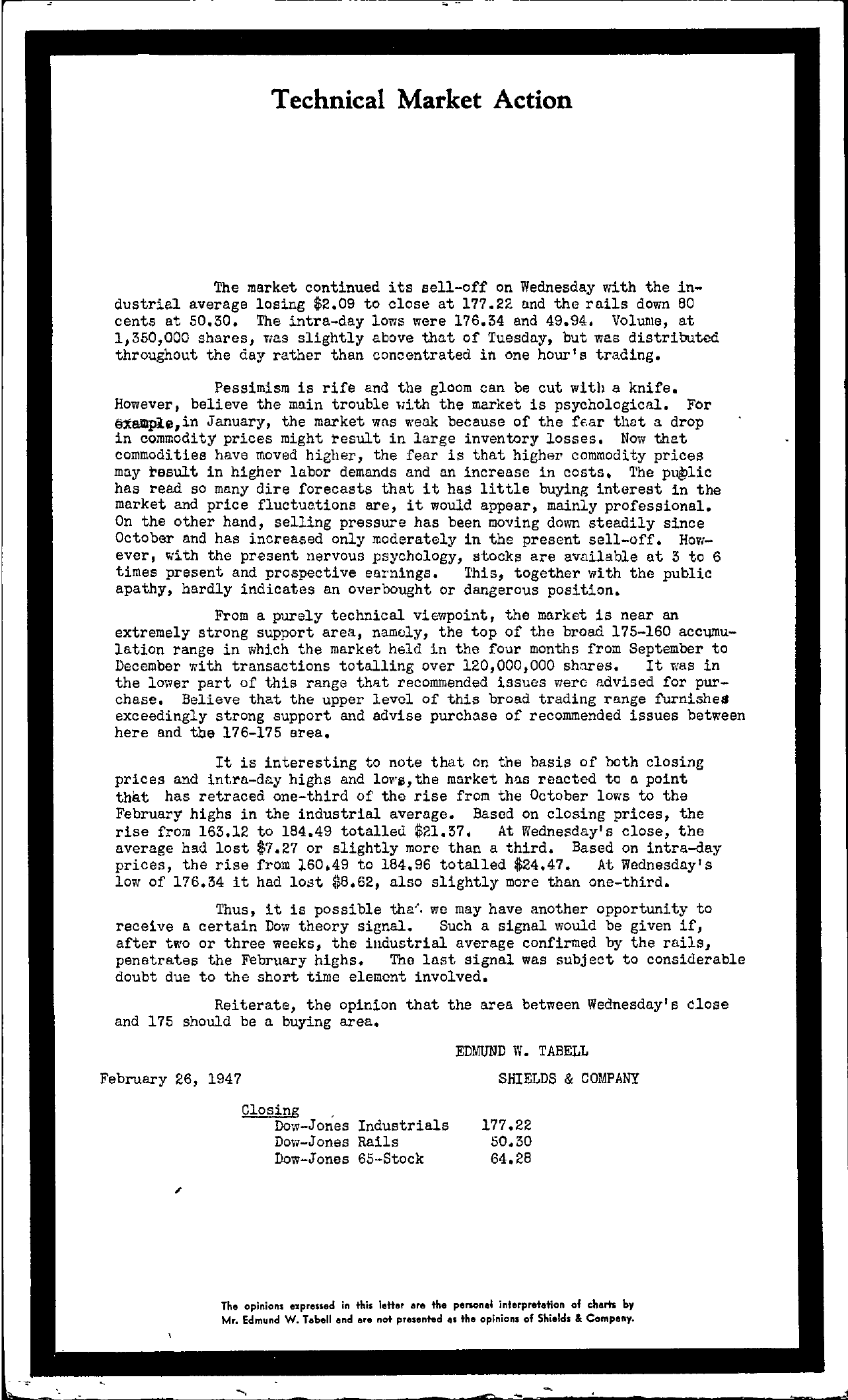 Technical Market Action The market continued its sell-off on Wednesday with the industrial average losing 2.09 to close at 177.22 und the rails down 80 cents at 50.50. The intra-day lovls were 176.54 and 49.94. Volume, at 1,350,000 shares, Vias slightly above that of Tuesday, but was distributed throughout the day rather than concentrated in one hour's trading. Pessimism is rife and the gloom can be cut with a knife. However, believe the main trouble 'Ii.th the market is psychological. For axample,in January, the market was weak because of the fr.ar thct a drop in commodity prices might result in large inventory losses. Now that commodities have moved higher, the fear is that higher commodity prices may result in higher labor demands and an increase in costs. l'he p\llic has read so many dire forecasts that it has little buying interest in the market and price fluctuc.tions are, it would appear, mainly professional. On the other hand, selling pressure has been moving down steadily since October and has increased only moderately in the present sell-off. HoV/ever, with the present nervous psychology, stocks are available at 5 to 6 times present and prospective earnings. This, together with the public apathy, hardly indicates an overbought or dangerous position. From a purely technical Viewpoint, the market is near an extremely strong support area, namoly, the top of the broad 175-160 accu lation range in which the market held in the four months from September to December with transactions totalling over 120,000,000 shares. It was in the 10Vier part of this range that recommended issues were advised for purchase. Believe that the upper level of this broad trading range furnisheS exceedingly strong support and advise purch3sa of recommended issues between here and the 176-175 area. It is interesting to note that on the basis of both closing prices and intra-day highs and lo's, the market has reacted to Il point that has retraced one-third of the rise from the October lovls to the February highs in the industrial average. Based on closing prices, the rise from 165.12 to 184.49 totalled 21.57. At Wednesday's close, the average had lost 7.27 or slightly more than a third. Based on intra-day prices, the rise from 160.49 to 184.96 totalled 24.47. At Wednesday's low of 176.54 it had lost 8.62, also slightly more than one-third. Thus, it is possible ths. we may have another opportunity to receive a certain Dow theory signal. Such a signal would be given if, after two or three weeks, the industrial average confirmed by the rails, penetrates the February highs. The last signal was subject to considerable doubt due to the short time element involved. Reiterate, the opinion that the area between Wednesday's close and 175 should be a buying area. February 26, 1947 EDMUND W. TABELL SHIELDS & COMPANY Closing . Dow-Jones Industrials Dow-Jones Rails Dow-Jones 65-Stock 177.22 50.30 64.28 The opinions expressed in this letter are the pefOn4 interpretation of charts by Mr. Edmund W. iabell end ere not presented .,. the opinions of Shields & Company. d ' .c–