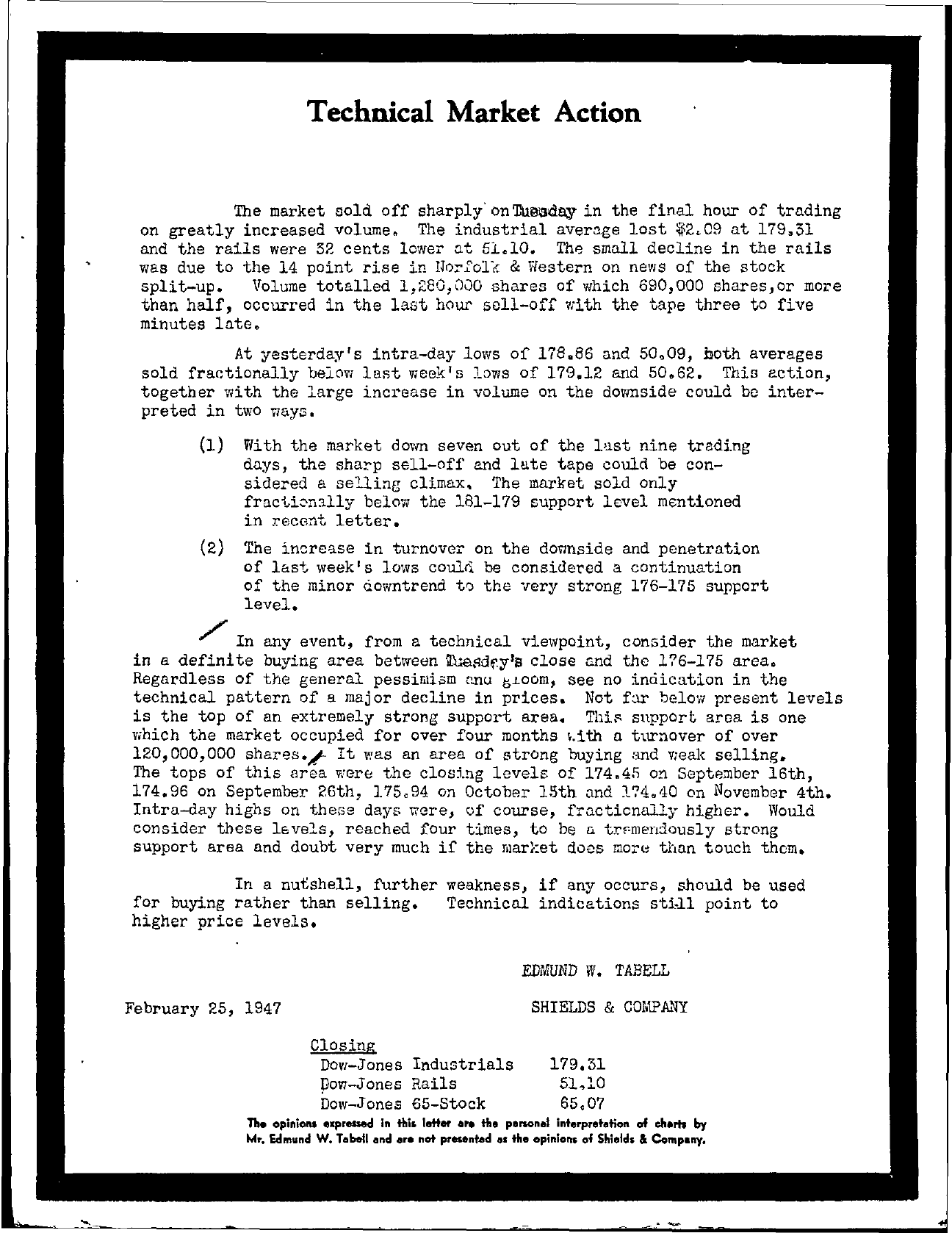 Technical Market Action The market sold off sharply' on'llUeaday in the final hour of trading on greatly increased volume. The industrial avern.ge lost 2.09 at 179.31 and the rails were 32 cents lower at 51..10. Th, small decline in the rails was due to the 14 point rise in llo-folf. &Viestern on news of the stock split-up. Volume totalled 1,280,()00 shares of vlhich 690,000 shares,or more than half, occurred in the last hour soll-off with the tape three to five minutes late, At yesterday's intra-day lows of 178.86 and 50.09, hoth averages sold fractionally below laBt week's 10ws of 179.12 and 50.62. This action, together with the large increase in volume on the downside could be interpreted in two Vlays. (1) With the market dovm seven out of the hst nine trading days, the sharp sell-off and lute tape could be con- sidered a selling climax. The market sold only fractinally below the 181-179 support level mentioned in recGnt letter. (2) The increase in turnover on the do,mside and penetration of lEtst week's lows couln. be considered a continun.tion of the minor downtrend to the very strong 176-175 support level. In any event, from a technical viewpoint, consider the market in a definite buying area between sdyla close and the 176-175 area, Regardless of the general pessimism QnU giOOm, see no inciicn.tion in the technical pattern of a maj or decline in prices. Not flI' below present levels is the top of an E'xtremely strong support area. Thi; suppOr t area is one which the market occupied for over four months I.ith a t1.1Inover of over 120,000,000 shares./ It was an area of strong buying and vleak selling. The tops of this area were the closJ.ng levels of 174.4- on September 16th, 174.96 on SeptE'mber Z.6th, 175,94 on October 15th and 174AO on November 4th. Intra-day highs on these days 17ere, of course, frn.cticnally higher. Would consider these levelS, reached four times, to be 11 trrmo'niously strong support area and doubt very much if the marlet does more than touch thorn. In a nutshell, further weakness, if any occurs, should be used for buying rather than selling. Technical indications stll point to higher price levels. EDMUND W. TABELL February 25, 1947 SHIELDS & COMPA..'lY Closing Dov/-Jones Industrials 179.31 j)oVl-Jones Hails 51.10 Dow-Jones 65-Stock 65,07 Th. opinions expressed in thi5 letter are the personal interpretation of cherts by Mr. Edmund W. TebeU end er. not presenhd .1 the opinions of Shields I Company.