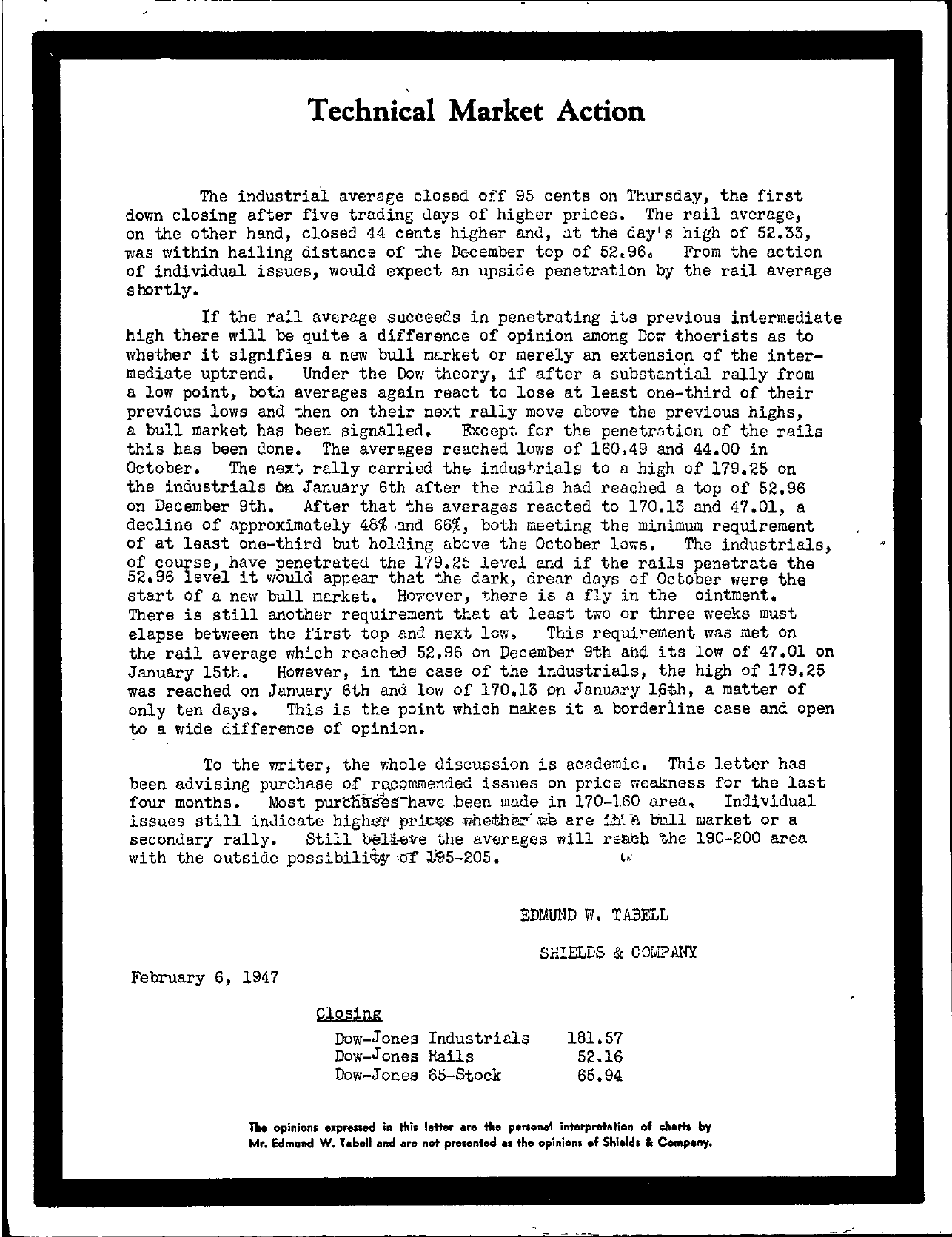 Technical Market Action The industrial average closed off 95 cents on Thursday, the first down closing after five trading days of higher prices. The rail average, on the other hand, closed 44 cents highGr and, at the day's high of 52.55, was within hailing distance of thG DGcember top of 52.96, From the action of individual issues, would expect an upside penetration by the rail average shortly. If the rail average succeeds in penetrating its previous intermediate high there will be quite a difference of opinion among DOll thoerists as to whether it signifies a new bull market or merely an extension of the intermediate uptrend. Under the Dow theory, if after a substant'ial rally from a low point, both averages again react to lose at least one-third of their previous lows and then on their next rally move above the previous highs, a bull market has been signalled. Except for the penetration of the rails this has been done. The averages reached lows of 160.49 and 44.00 in October. The next rally carried thb indusrials to a high of 179.25 on the industrials On January 6th after the rails had reached a top of 52.96 on December 9th. After that the averages reacted to 170.13 and 47.01, a decline of approximately 48 ,and 66, both meeting the minimum requirement of at least one-third but holding above the October lows. The industrials, of course, have penetrated the 179.25 level and if the rails penetrate the 52.96 level it would appear that the dark, drear duys of Odober were the start of a new bull market. HOFever, chere is a fly in the ointment. There is still another requirement that at least two or three weeks must elapse between the first top and next low. This requiement was met on the rail average which reached 52.96 on December 9th and its low of 47.01 on January 15th. However, in the case of the industrials, the high of 179.25 was reached on January 6th and low of 170.13 on Januay 16th, a matter of only ten days. This is the point which makes it a borderline case and open to a wide difference of opinion. To the writer, the whole discussion is academic. This letter has been advising purchase of rD,Commended issues on price weakness for the last four months. Most pur1!1i'iries-havc ,been made in 170-1.60 area. Individual issues still indicate highlE!t' prllC whelthM-' .wi' are il S bill market or a secondary rally. Still bellve the averages will rGabh the 190-200 area with the outside possibiliir 1' 195-205. ,. February 6, 1947 EDMUND VI. TABELL SHIELDS & COMPANY Closing Dow-Jones Industrials Dow-Jones Rails Dow-Jones 65-Stock 181.57 52.16 65.94 Th. opinions expreued in tftis letter 111'8 the penona1 interpretation of diem by Mr. Edmund W. T.b.n lind are not presented the opinions .f Shi.ld. & eom,.ny.