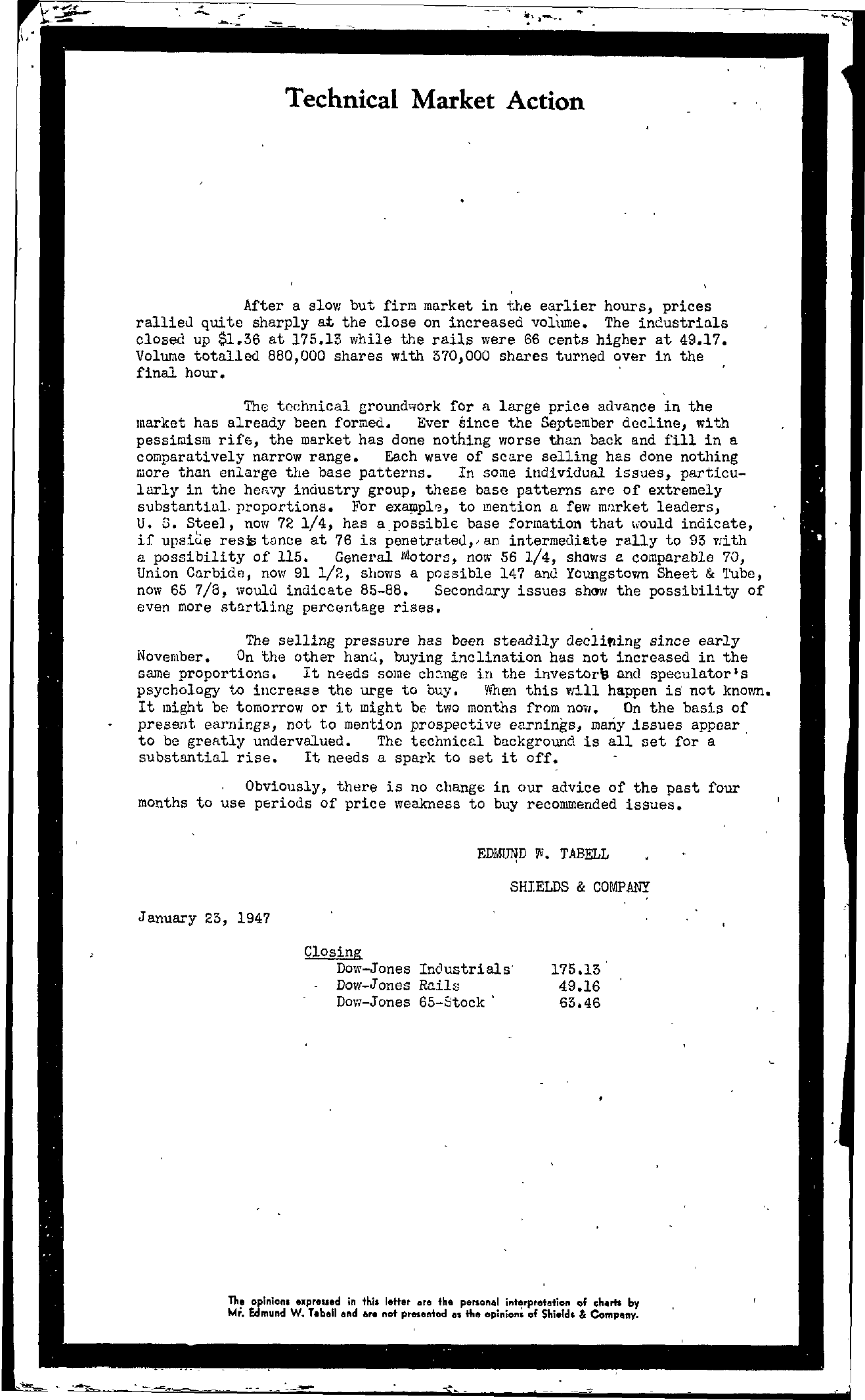 Technical Market Action After a slow but firl!l market in t.he earlier hours, prices rallied quit.e sharply at the close on increased vollune. The intustrials closed up 1.36 at 175.15 while the rails were 66 cents higher at 49.17. Volume totalled 880,000 shares with 370,000 shares turned over in the final hour. The tcrhnical groundwork for a large price advance in the Inarket has already been formed. Ever since the September decline, with pessimism rife, the market has done nothing worse than back and fill in e comparatively narrow range. Each wave of scare selling has done nothing more than enlarge the base patterns. In some individual issues, particularly in the hevy industry group, these base patterns are of extremely substantial. proportions. !'or eXB.!lJp18, to mention a few mflrket leaders, U. 13. Steel, noV 72 1/4, has a.possible base formation that ould indicate, if upsi6.e reSE tDnce at 76 is penetrated an intermediate rally to 95 viith a possibility of 115. General lotors, now 56 1/4, shaws a comparable 70, Union Carbide, noVi 91 1/2, shows a pOEsible 147 and youngstown Sheet & Tube, now 65 7/8, would indicate 85-88. Secondary issues shJW the possibility of even more startling percentage rises. The selling pressure has been steadily decliing since early November. On the other hanC;, buying inclination has not increased in the same proportions. It n'3eds some chmge in the investor\! and speculator's psychology to increase the urge to buy. When this will happen is not known. It might be tomorrow or it might be two months from now. On the basis of present earnings, not to mention prospective earnings, many issues appear to be greatly undervalued. The techniccl background is all set for a . SUbstantial rise. It needs a spark to set it off. Obviously, there is no change in our advice of the past four months to use periods of price weakness to buy recommended issues. January 25, 1947 EDMU11D \Ii. TABELL SHIELDS & COMPANY Closing Dow-Jones InCiustrials' Dow-Jones Rails Dow-Jones 65-Stock ' 175.15 49.16 65.46 The opinions a.praued in this letter ere the personal interpretation of ch.,.. by t-,;4;. Edmund W. l.bell end 6,. not presented 41 tt.e opinions of Shi.ld, & Company.