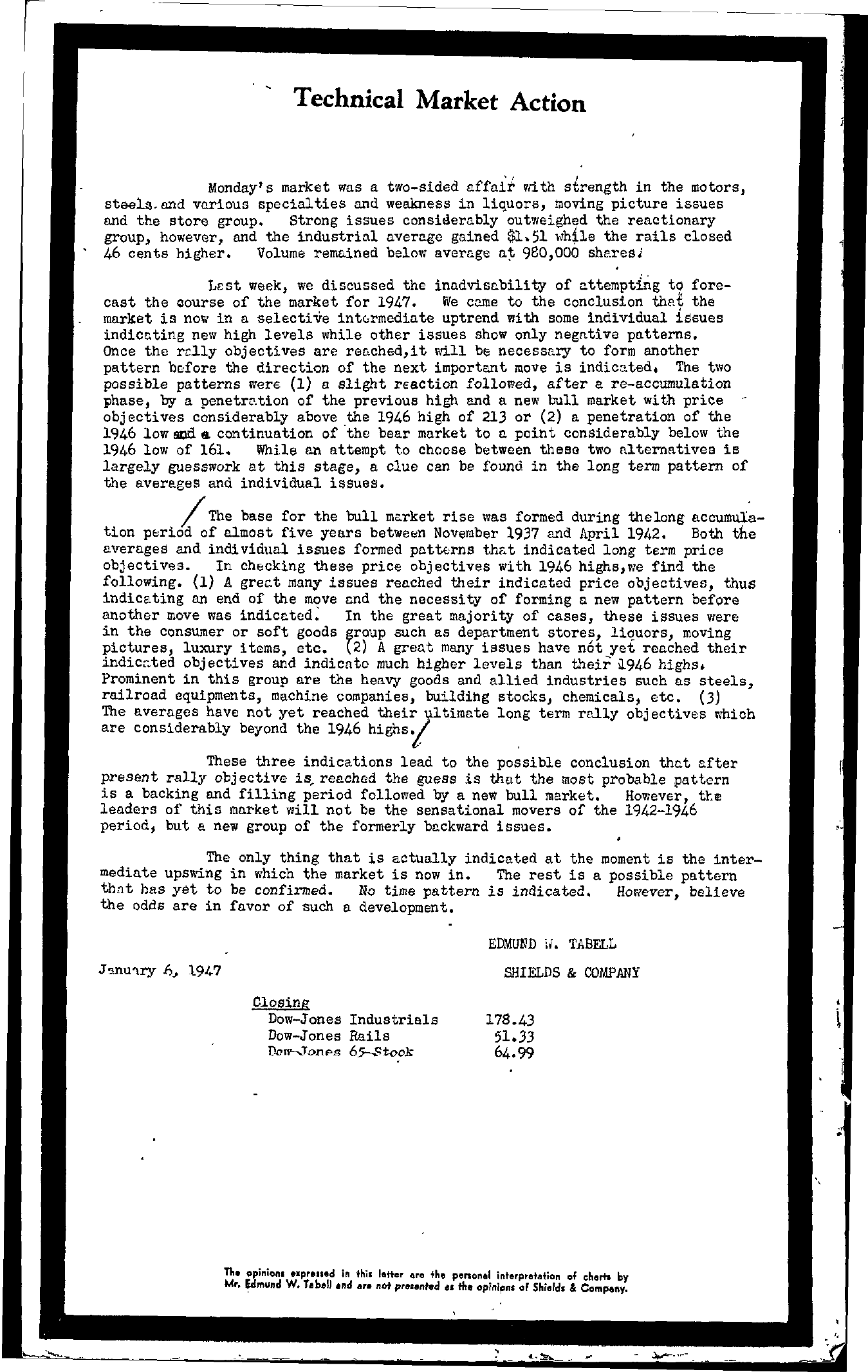 Technical Market Action Monday's market was a two-sided affair with stIrength in the motors, steels. and various specialties and weakness in liquors, moving picture issues and the store group. strong issues consiaerably outweighed the reactionary group, however, and the industrial average gained 1.51 while the rails closed 46 cents higher. Volume remained below average at 980,000 shares; LEst week, we discussed the inadvisability of attempting to fore- cast the course of the market for 1947. We came to the conclusion that the market is noVi in a selective intJrmediate uptrend with some indiVidual issues indiccting nev, high levels while other issues show only negn.tive patterns. Once the rdly objectives are rer,ched,it will be necessary to form another pattern before the direction of the next important move is indicated, The two possible patterns were (1) a slight reaction followed, after are-accumulation phase, by a penetrc,tion of the previous high and a new bull market with price objectives conSiderably above .the 1946 high of 213 or (2) a penetration of the 1946 low5Oda continuation of the bear market to a point conSiderably below the 1946 low of 161. While an attempt to choose between thesa two Il.lternatives is largely guesswork at this stage, a clue can be found in the long term pattern of the averages and individual issues. I The base for the bull market rise was formed during thelang accumul tion priod of almost five years betwen November 1937 and April 1942. Both the averageS and individual issues formed pattErns thr.t indicated lang term price objectives. In checking these price obj ectives with 1946 highs, we find the following. (1) A great many issues reached their indicated price objectives, thus indicating an end of the move end the necessity of forming a new pattern before another move was indicated; In the great majority of cases, these issues were in the consumer or soft goods roup such as department stores, liquors, moving pictures, luxury items, etc. (2) A great many issues have not yet reached their indicated objectives and indicato much higher levels than their 946 highs. Prominent in this group are the heavy goods and allied industries such as steels, railroad equipments, machine companies, building stocks, chemicals, etc. (3) The averages have not yet reached their timate long term rally objectives which are considerably beyond the 1946 highS . These three indications lead to the possible conclusion that after present rally objective i reached the guess is that the most probable pattern is a backing and filling period followed by a new bull market. However, tte leaders of this market will not be the sensational movers of the 1942-1946 period, but a new group of the formerly backward issues. The only thing that is actually indicated at the moment is the intermediate upswing in which the market is now in. The rest is a possible pattern that has yet to be confirmed. No time pattern is indicated. However, believe the odds are in favor of such a development. Closing Dow-Jones Industrials Dow-Jones Rails DonTonps 6qtock EDMUND ',1. TABELL SHIELDS & COMPANY 178.43 51.33 64.99 i w.Th. opinions e.prelled in this letter ore he penonel interpretation of cherts by Mr. ,und rebel! .nd are not ,,anted a. th. opinipn. of Shield, & Compeny.