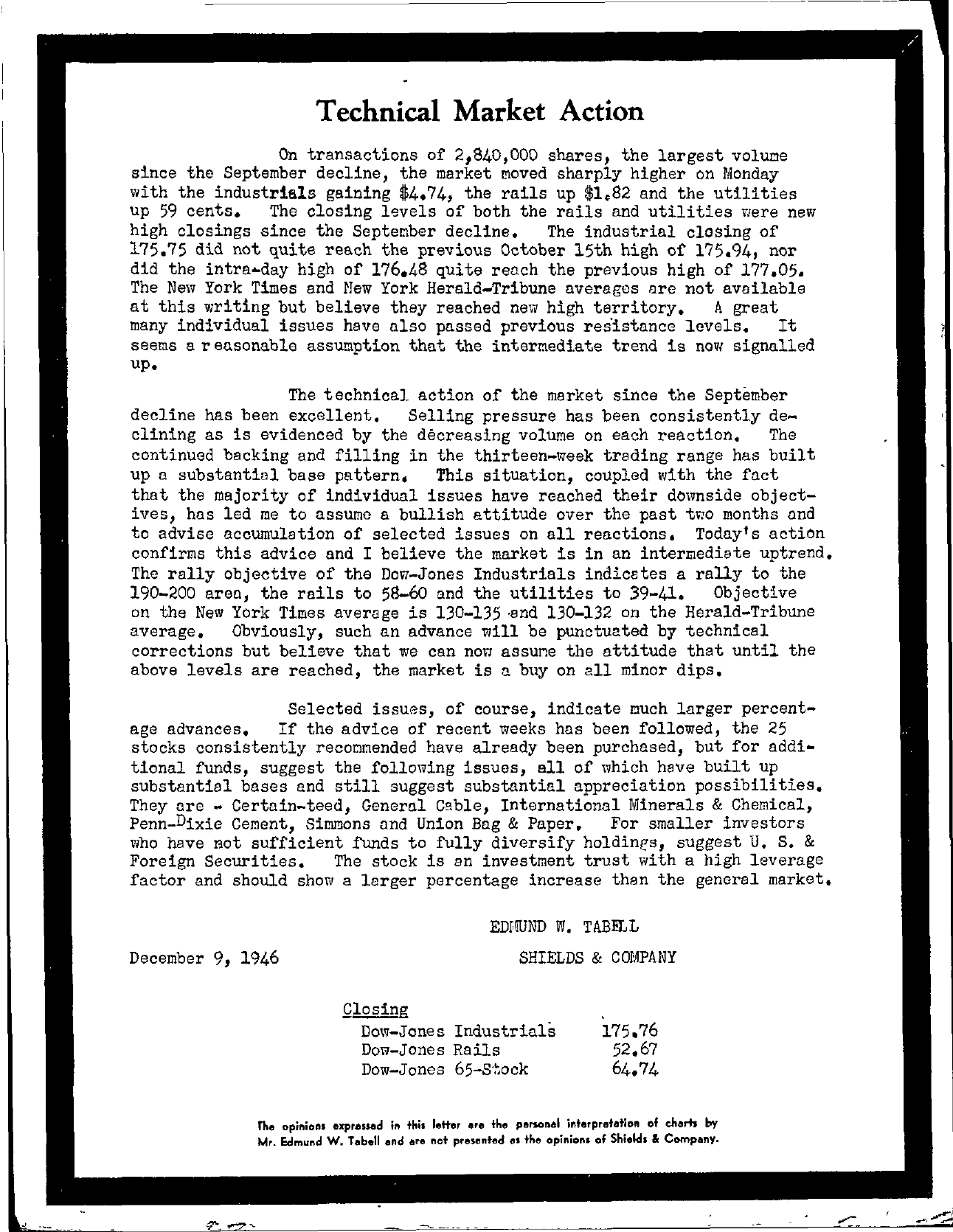 Technical Market Action On transactions of 2,840,000 shares, the largest since the September decline, the market moved sharply higher on Monday with the industrials gaining 4.74, the rails up 1.82 and the utilities up 59 cents. The closing levels of both the rails and utilities vlere new high closings since the decline. The industrial closing of 175.75 did not quite reach the previous October 15th high of 175.94, nor did the intra.day high of 176.48 quite reach the previous high of 177.05. The New York Times and New York Herald-Tribune averages are not available a t this writing but believe they reached new high territory. A great many individual issues have 111so pnssed previous resistanc8 levels. It seems a reasonable assumption that the intermediate trend is novi signalled up. The technical action of the market since the September decline has been excellent. Selling pressure has been consistently declining as is evidenced by the decreasing volume on each reaction. The continued backing and filling in the thirteen-week trading range has built up a substantial base pattern, This situation, coupled with the fact that the majority of individual issues have reached their downside objectives, has led me to assumo a bullish attitude over the past two months and to advise accumulation of selected issues on all reactions, Todayfs action confirms this advice and I believe the market is in an intermediate uptrend. The rally objective of the Dow-Jones Industrials indicates a rally to the 190-200 area, the rails to 58-60 and the utilities to 39-41. Objective on the New York Times average is 130-135 130-132 on the Rerald-Tribune average. ObViously, such an advance will be punctuated by technical corrections but believe that we can now assune the attitude that until the above levels are reached, the market is a buy on all minor dips. Selected issues, of course, indicate larger percent- age advances. If the advice of recent weeks has been followed, the 25 stocks consistently reconmended have already been purchased, but for addi- tional funds, suggest the following issues, all of which have built up SUbstantial bases and still suggest substantial appreciation possibilities. They are – Certain-teed, General Cable, International Minerals & Chemical, Penn-Dixie Cement, Simmons and Union Bag & Paper. For smaller investors who have sufficient funds to fully diversify holdines, suggest U. S. & Foreign Securities. The stock is an investment trust with a high leverage factor and should show a larger percentage increase than the general market, December 9, 1946 EmIDND W. TABELL SHIELDS & COMPANY glosing Dow-Jones Industrials Dow-Jones Rails Dow-Jones 175.76 52.67 64.74 The opiniorn expraued in this letter re the personal interpretation of cham by Mr. Edmund W. Tabel! end ere not presented as the opinions of Shiekls & Company.